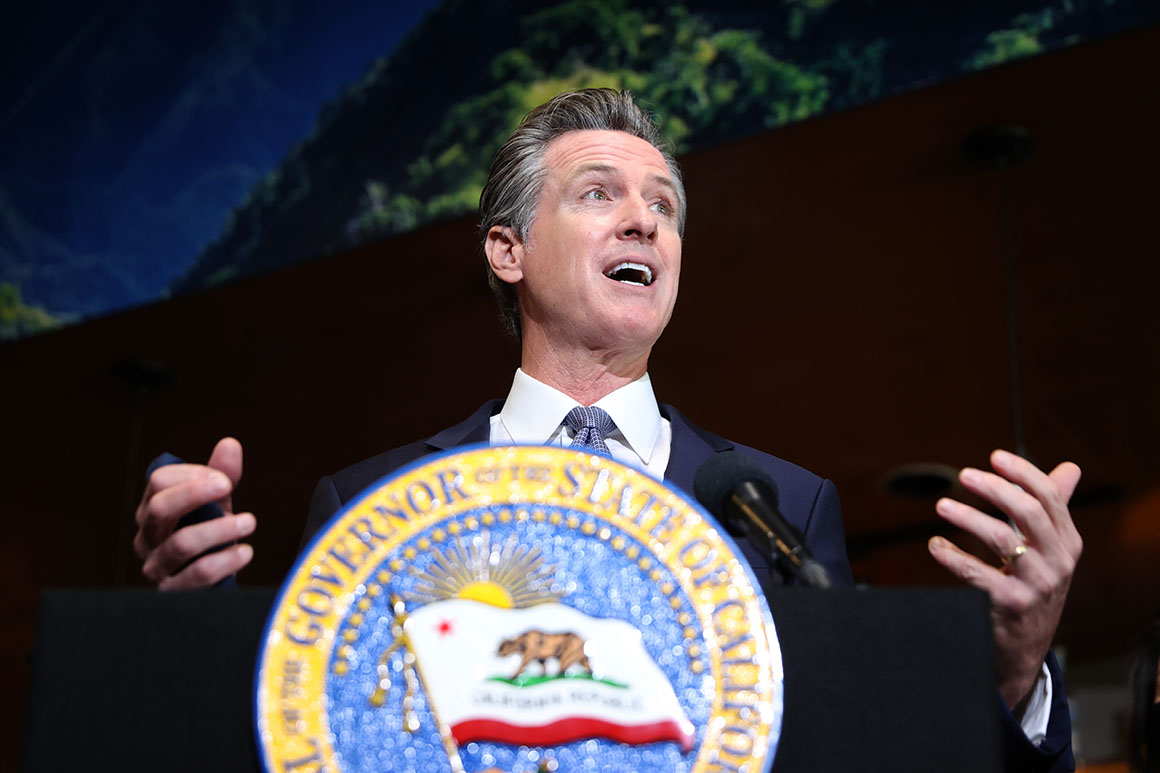 OAKLAND — California Gov. Gavin Newsom is back with a progressive fury after defeating a conservative-led recall attempt in September.

On the talk-show circuit last week, Newsom blasted red states for their Covid-19 response and conservative policies, name-checking Indiana alongside Florida and Texas and doubling down on a successful recall message. After returning home, he used Twitter Saturday night to rip the Supreme Court for letting Texans privately sue abortion providers, vowing to seek a comparable law enabling Californians to sue gun makers.

It’s a far cry from a year ago, when Newsom was humiliated by the revelation he attended a lobbyist’s dinner party at the elite French Laundry restaurant right as he urged residents to stay home and the state entered its worst stretch of the pandemic.

The Democratic governor is now trying to affirm his position as head of the blue-state brigade, seemingly itching for a fight from any red state.

“It must really piss people off that you actually maintained your job,” Whoopi Goldberg told him during an appearance on “The View.”

Newsom still dismisses talk of White House ambitions, as was the case last week, but his actions often suggest otherwise.

In a Saturday night announcement that swiftly reverberated around the country, Newsom blasted the Supreme Court for preserving a Texas statute that empowers private citizens to enforce the state’s six-week abortion ban. He said the court opened the door for California to allow the same against manufacturers of ghost guns and assault weapons, which are already illegal in the state.

His latest salvo functions as a precedent-testing legal gambit and a poke in the eye of his rivals in red states. It also lets the Democratic governor put his agenda at the vanguard of national progressive politics.

“This is teeing up for a red-state-blue-state fight about whether and how this should be a fair use of the law,” said Ann O’Leary, a private attorney who was previously Newsom’s chief of staff. “He’s meeting a need both nationally and in California for trying to prevent these horrific acts of violence.”

Political and legal observers viewed such a move as nearly inevitable after the U.S. Supreme Court’s ruling. It was only a matter of time, in this view, before a liberal state tested that same legal logic on a progressive principle. Newsom was simply out in front.

Republican Texas Gov. Greg Abbott springboarded off of Newsom’s proposal to attack Democratic gubernatorial candidate Beto O’Rourke, tweeting that “this is exactly what Beto would do if elected Governor of Texas.” The National Rifle Association assailed Newsom’s “war on lawful gun ownership” as mere “political theater.”

“What a pathetic attempt to remain relevant,” Newsom responded on Twitter. “Go back to your audits of Wayne LaPierre’s receipts.”

By inserting California into a battle with national stakes, Newsom is reprising his Trump-era role as a leader of the liberal resistance, albeit with Democrats in control of the White House and Congress. That could bolster Newsom’s standing among California voters while re-introducing himself to a larger audience of Democratic voters. The Texas-California feud benefits Newsom and his Republican counterpart Abbott “because it’s an ideal way of rallying their respective bases,” said Dan Schnur, a California politics professor who was a spokesperson for former California Gov. Pete Wilson.

“Newsom took office during the Trump administration and from day one positioned himself not just as a state but a national Democratic voice against Trump — taking on a conservative-controlled Supreme Court is just as good an opportunity,” Schnur said. “On the chance that Newsom ever does decide he wants to run for president, this type of national positioning helps him greatly. But more importantly, in the short-run, it’s a tremendous benefit to him in California.”

Newsom swiftly touted the announcement to his base in an effort to capitalize politically. He asked people on his donor list to sign a petition in support. “I am looking for a lot of signatures backing me up,” the missive urged, linking to a petition that solicits donations for Newsom’s re-election campaign.”

The governor’s proposal has played well on liberal Twitter. But longtime San Francisco Chronicle legal writer Bob Egelko noted that California already has state-enforced laws against assault weapons and ghost guns, a significant distinction from Texas’ six-week abortion law. Conservative commentator Margaret Hoover told CNN it seemed “a little too cute by half,” though she added, “I understand what he’s doing, and he’s trying to make a point.”

And the Los Angeles Times editorial board declared that “Newsom’s Texas-style gun ploy is an emotionally satisfying, and very bad, idea.”

That Newsom is driving a national conversation again is a remarkable turn for a Democratic governor who one year ago was at the lowest ebb of his political career. Besides the French Laundry incident, California had so many serious Covid cases that hospitals had to put patients in hallways and gift shops. His restrictions, along with pandemic frustrations, were enough to qualify the state’s second-ever gubernatorial recall election.

But infection rates plummeted this spring, students returned to classrooms and businesses reopened their doors. And Newsom decisively repudiated the recall in September, using his Covid response as his lead campaign argument.

The state’s budget is overflowing, defying expectations of prolonged deficits. A November poll found voter approval of Newsom’s economic management climbing to its highest level in more than a year. He has more than $24 million in his re-election account.

Newsom appeared on the Daily Show last week to promote his children’s book about a kid who, like Newsom, struggles with dyslexia. “You’ve had a really rocky journey, to say the least, in and around the pandemic,” host Trevor Noah told his guest, but ultimately, “the people were like ‘alright, Governor Newsom, we’re going to roll with you.’”

California Republicans are on their back feet. In September, as Republicans sifted through the fallout of an overwhelming defeat, state party chair Jessica Millan Patterson seemed to acknowledge the uphill battle they faced to reclaim the governorship — saying at a convention the party would “play in the fights that we can win” and focus in 2022 on retaking the House.

“We’re going to have a lot of opportunities legislatively,” Patterson said in an interview, but “we have to be incredibly intentional and effective with every single dollar we spend… We’re going to go to the places where we can affect change, where we can pick up seats.”

The governor still faces political headwinds. The rising cost of gasoline and other goods is pinching Californians’ finances, contributing to an overall bleak economic mood. And a spate of smash-and-grab burglaries has added to fears about rising rates of property and violent crimes, putting Newsom in the position of condemning the perpetrators and vowing more resources while defending criminal justice reforms.

“California still has the highest unemployment, we’ve seen this incredible surge in crime, the supply chain issues, a homeless crisis he vowed to fix, the highest gas prices in the nation and failing schools — if that’s a position of strength, I hate to see what a position of weakness would be,” Patterson said.

“A few months ago, the governor was clearing out underpasses,” Patterson added in reference to the trash cleanups Newsom conducted during the recall campaign. “Now he’s on a book tour. It’s clear talk is cheap when it comes to this governor.”

Republican consultant Stephen Puetz, who managed the failed recall campaign of former San Diego Mayor Kevin Faulconer, argued that the recall was distinct from the coming re-election campaign because Newsom was able to make it a nationally-framed contest against Republican frontrunner Larry Elder, who espoused libertarian views that estranged him from most of California’s electorate. Puetz warned that if Newsom gets overconfident, “that’s potentially at his own detriment.”

Still, Newsom crushed the effort by a near-identical margin to his 2018 victory. The centrist Faulconer, seen by many establishment Republicans as a viable statewide contender, finished a distant second among Newsom challengers as conservatives rallied behind Elder.

The result both vindicated Newsom and allowed him to preview 2022 re-election themes, benefiting this year from California election rules that allow recall-targeted governors to raise unlimited sums.

“Nobody likes to be recalled but you’re able to raise money outside of the limits, which gives you an opportunity, if you’re in a fairly positive place with the voters anyway, to start pushing out good messages until the money runs out,” said Democratic consultant Roger Salazar, who worked for former Gov. Gray Davis until Davis was recalled. “They used all their resources to pump out positive messages about Newsom. He ended up in a stronger spot politically as a result.”

This article tagged under: