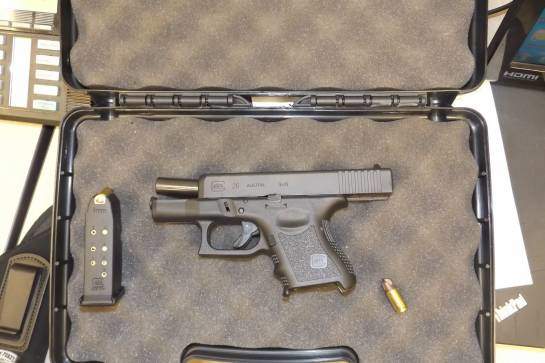 “One of the best things we can do to stop gun violence is to eliminate gun trafficking. Thousands of illegal guns flow into Chicago, and all of Illinois, from surrounding states each year. Those guns go on to account for more than 50% of the firearms used in the commission of crimes in Chicago. Enough is enough,” said Congresswoman Robin Kelly (D-IL). “I’m introducing the Federal Firearms Licensee Act to hold rogue dealers accountable and ensure that we are able to adequately respond to the gun trafficking that is contributing to the deadly gun violence epidemic. This legislation proposes commonsense security and gun sale tracing policies to ensure that FFLs are not contributing to the flow of guns into our communities.”

“Our current background check system has far too many loopholes – allowing unregulated sales of firearms to people who are not meant to own guns under our current laws and preventing transparency of who owns these weapons,” said Congressman David Cicilline (D-RI). “This comprehensive package is what we need to plug these holes and ensure that all licensed firearms dealers are playing by the rules, and that our laws are keeping up with current technology. I’m proud that this bill includes provisions of my bill, the Fire Sale Loophole Closing Act, to prevent gun dealers who lose their licenses from converting their unsold firearms to personal inventory, which enables them to then sell this inventory without conducting background checks. I applaud my friend and colleague Congresswoman Kelly for her work on this bill.”

“Nearly 40,000 Americans lose their lives to gun violence each year, and many of the weapons involved come from rogue dealers who have largely been insulated from the law. Access to illegal firearms perpetuates the daily gun violence we experience in low-income and communities of color,” said Congresswoman Barbara Lee (D-CA). “Strong regulation of firearms dealers is essential to ending the epidemic of gun violence in this country. I’m proud to support Representative Kelly’s comprehensive bill to address the supply side issues around gun violence and prevent them from falling into the hands of dangerous individuals.

“Irresponsible gun dealers must be held accountable for their illegal activities, such as falsifying records, failing to implement adequate security measures, or selling firearms without a background check. These practices contribute to the gun violence epidemic in the United States, putting all Americans at risk,” said Representative Langevin (D-RI). “This legislation brings together solutions, including provisions from the Keeping Gun Dealers Honest Act, that will give ATF the tools they need to crack down on gun dealers who break the law. I thank Representative Kelly for leading this important legislation, and I look forward to working with my colleagues in the House to pass this bill.”

“Across America, we are facing an epidemic of gun violence—yet licensed gun dealers are not required to take even the most basic safety precautions to protect these dangerous weapons from falling into the wrong hands,” said Congressman Joe Morelle (D-NY). “I have long been an advocate for action to hold firearms dealers accountable and stem the tide of gun trafficking, so I’m proud to sponsor this legislation which includes provisions of my Gun Theft Prevention Act. I am grateful for the partnership of Rep. Kelly as we work together to better protect our communities from the devastation of gun violence.”

“Americans would be appalled at the state of crime gun tracing in America today,” said Rep. Pascrell (D-NJ), co-chair of the Congressional Law Enforcement Caucus. “Because of an anachronistic law imposed at the behest of the NRA, the ATF is literally banned from using computers to trace firearms used in crimes. Our simple change in this legislation, based on my Crime Gun Tracing Modernization Act, will help prevent crime, will save lives, and will create needed efficiency by finally bringing ATF crime gun tracing into the 21st century. After decades of being hamstrung by extremist NRA policies, the ATF must be given the authority to do its job. I thank Congresswoman Kelly for leading the way to finally passing the commonsense firearms reform Americans cry out for every day.”

“It’s been far too long since Congress has done anything in regards to updating our firearm safety laws,” said Congressman Panetta (D-CA). “As a member of Congress, but also as a former local prosecutor, I’m proud to work with Rep. Robin Kelly and my other colleagues to introduce this legislation that would modernize our system of background checks and dealer licensing for firearm purchases. Part of this bill includes provisions of my NICS Data Integrity Act that would ensure all available federal background check systems are utilized. It’s this type of comprehensive and common-sense legislation that would not only prevent guns from getting into the wrong hands but also help keep Americans safe.”

“Gun violence is an epidemic affecting all of us —yet some licensed gun dealers do not take common-sense steps to secure firearms and prevent them from getting into the hands of violent repeat offenders,” said Congressman Kweisi Mfume (D-MD). “I want to thank Rep. Robin Kelly for her leadership on this issue. Let’s save lives by passing this bill.”

“Right now, the ATF is fighting rogue gun dealers with one hand tied behind its back — which is just how the gun lobby designed it,” said John Feinblatt, president of Everytown for Gun Safety. “Rep. Kelly’s bill would give the ATF the tools it needs to hold irresponsible gun dealers accountable for putting profit ahead of public safety.”

“Keeping guns out of the hands of those who are legally prohibited from owning them isn’t only commonsense, it saves lives — and that’s exactly what this bill will help do,” said Shannon Watts, founder of Moms Demand Action. “We’re proud to stand in strong support of Rep. Kelly’s legislation to close loopholes in the Federal Firearm Licensee system and bring these regulations into the 21st century.”

“While gun violence is a complex, public health crisis, we know that addressing the flow of firearms into communities is a proven and effective way to stop gun violence from ever occurring,” said Brady: United Against Gun Violence President Kris Brown. “The Federal Firearm Licensee Act takes this supply-side approach to stopping guns from flooding communities and driving gun violence, particularly in Black and Brown communities that bear the disproportionate impact of this crisis. This bill will improve oversight of federally licensed firearm dealers and decrease the flow of firearms into the criminal market. These are common-sense solutions that will save lives. Brady thanks Rep. Kelly for introducing this common-sense and important bill to stop gun violence at the source.”

This legislation expands the applicability of federal firearms laws to “facilitators” of firearm sales, such as sellers at gun shows and on online marketplaces, which, in several states, are currently permitted to host large commercial marketplaces that allow for the transfer of firearms to purchasers without first initiating a background check to determine whether the buyers are prohibited under applicable state and/or federal law.

The bill also modernizes regulations for existing FFLs by: