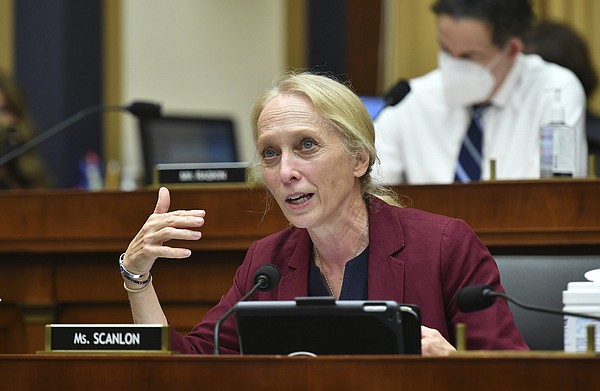 Scanlon’s blue Acura MDX was located Wednesday night in Newark, Del., about 45 miles from Philadelphia, Delaware State Police said. The five were apprehended as they tried to flee, police said.

Scanlon, D-Pa., was walking to her parked vehicle after a meeting in the city’s FDR Park shortly before 3 p.m. Wednesday when two armed men demanded her keys, police said. She handed them over, and one drove away in the car while the other followed in a dark sport utility vehicle, police said.

There was no indication the teenagers knew who Scanlon was.

The FBI on Thursday charged Josiah Brown, 19, with carjacking, a weapons charge, and aiding and abetting. He has not yet retained a lawyer to speak on his behalf.

According to the criminal complaint, Brown was carrying the keys to Scanlon’s vehicle.

Brown told FBI agents he and two accomplices were driving around Philadelphia when they decided to steal a car and spotted Scanlon. Brown claimed he was carrying an unloaded firearm, which was used to intimidate the congresswoman into handing over her keys, the FBI said in the complaint.

The FBI said Brown “provided a written apology to the victim, indicating that he was sorry for stealing the car and for pointing a gun at her.”

A 14-year-old female and three males, ages 13, 15, and 16, were each charged with receiving stolen property. The 15-year-old was also charged with resisting arrest and criminal mischief. Their names were not released because they are juveniles.

All the juveniles were released to their parents or guardians, while the 15-year-old was taken to a detention center, police said. All the suspects are from Wilmington, Del.

Scanlon’s office said she expressed gratitude to city police for their quick response and to her local police department and the Sergeant at Arms in Washington for working with Philadelphia police “to ensure her continued safety.”

Speaking during a news conference late Thursday afternoon, Scanlon said the incident was “obviously a scary thing to have happen” and added that she was thankful no one was hurt. She said the carjacking occurred shortly after she had returned to the parking area at the park.

As she spoke with one of her team members, Scanlon said another vehicle pulled up. A short time later, she noticed people “fidgeting” in the other vehicle, and then some of the occupants came out with guns and told Scanlon to give them the keys to her car, which she said she did because “I was afraid someone would do something more stupid than just stealing a car.”

Scanlon said President Joe Biden spoke with her Thursday to see how she was faring after the incident.

“I was quite touched that the president reached out to me,” she said. “It was mostly a personal call, but we talked a little bit about my frustration with not getting the [National Rifle Association] and right to do common sense gun control measures.”