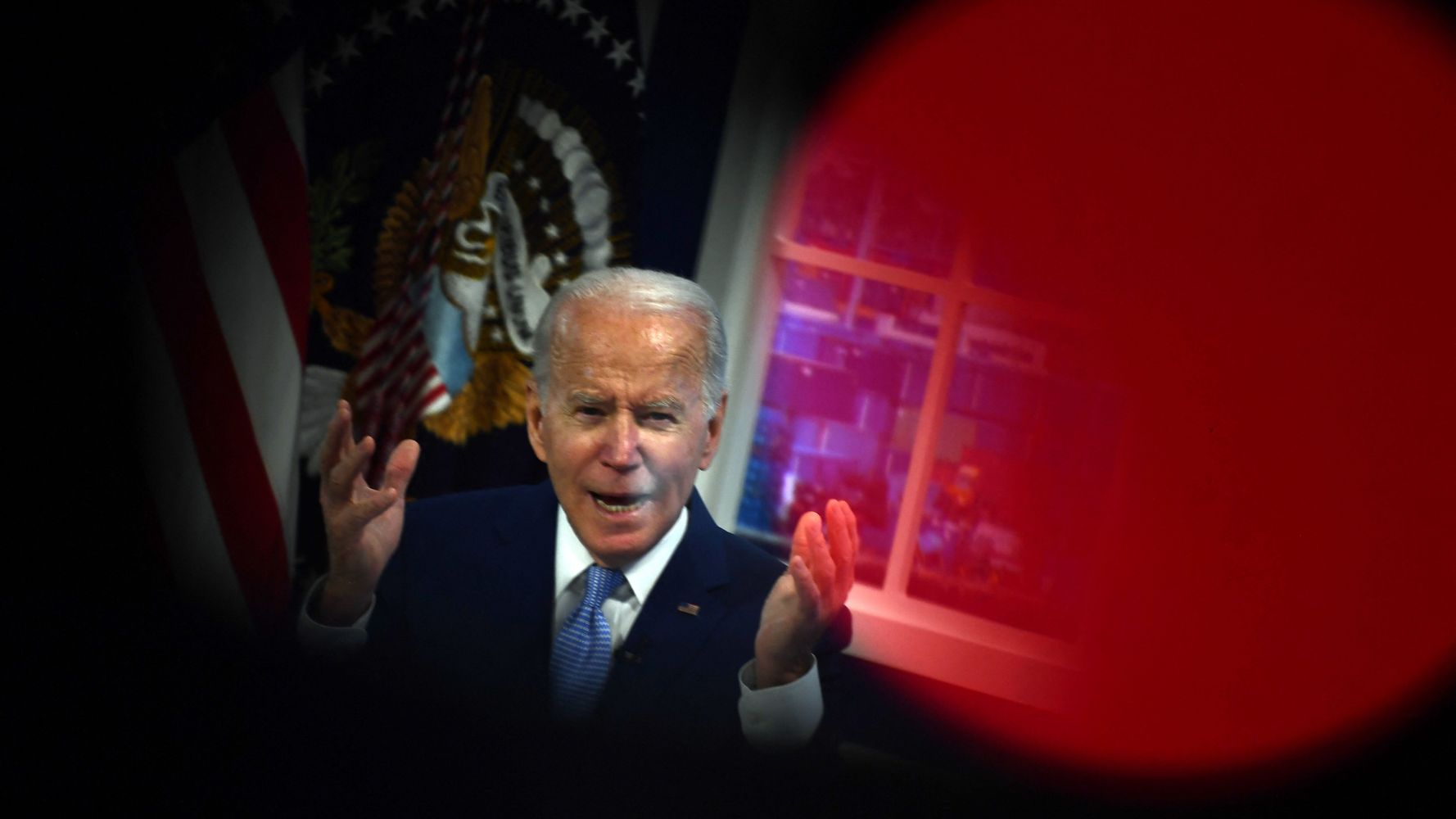 The Jan. 6 insurrection. Donald Trump out of the White House. COVID-19. Build Back Better.

2021 sure felt long. We here at HuffPost Politics went through our stories from the past year and pulled out a few of our favorites that we wanted to re-share with you. Maybe they’re pieces and events you missed, or stories worth reading again when you have time over your ― hopefully relaxing ― holidays.

Thanks for sticking with us this year and supporting our journalism.

This is a great example of explaining how the stuff that happens in the Capitol affects real people in real ways, WHILE the debate was still going on. That’s not easy. He also did a good job of getting into the story some basic facts about the lives of restaurant staff: the kind of abuse they get, particularly during the pandemic, as well as the money they make for a brutally demanding and strenuous job. ―S.V. Dáte

Joe Biden’s Administration Is Starting To Look Like A Mullet

The odd analogy seems to perfectly capture the first year of Biden’s administration. Biden was not Democrats’ progressive candidate — the veteran statesman spent much of his primary campaign deriding progressive policy ideas, from coining the most virulent attacks against “Medicare For All” to saying the Green New Deal was not his plan. He was the centrist pick who could pick up votes from former Republicans.

But in the White House, Biden has appointed an administration that has a lot of progressive policy minds working behind the scenes, and that influence has shown. As 2021 closes out, and the administration fights to get its Build Back Better agenda through Congress, it’s progressives and establishment types rallying behind the Biden agenda together, being blocked by the most conservative member of the Democratic caucus. ―Tara Golshan

Before its ouster of Chris Cuomo, CNN dragged its feet dealing with another another controversial political commentator: former Sen. Rick Santorum. The former GOP presidential candidate sparked outrage after claiming there was “nothing” in America before European colonizers arrived, dismissing Native American culture. After weeks of silence, pressure from Indigenous groups, and repeated queries from Jennifer Bendery to CNN, the network terminated his contract ― and Jen broke the news. ―Igor Bobic

Before reading this story by Tara Golshan, I knew Wisconsin Lt. Gov. Mandela Barnes was a Senate candidate and had a vague sense that he is a charismatic rising star in national politics. Tara’s profile helped illuminate his strengths and potential weaknesses. He is a talented public speaker and a successful Black progressive in a predominantly white swing state. But for reasons that are at least partly out of his control, Barnes has few tangible legislative accomplishments and that may erect hurdles on his path to the Senate. ―Daniel Marans

For decades, good government reformers argued that independent, citizen-led commissions would fix the country’s decennial redistricting process, which has contributed to brazen gerrymandering and heightened partisanship in Congress. Liz Skalka revealed how the bodies charged with redrawing legislative boundaries for the next decade are falling short of expectations — particularly “those set by Democrats who championed these reforms in response to out-of-control GOP gerrymandering following Republicans’ 2010 midterm sweep.” ―Igor Bobic

Akbar Ahmed published the most thorough accounting yet of the Biden administration’s failure to hold Saudi Arabia responsible for the 2018 killing of Jamal Khashoggi.

Saudi agents’ gruesome murder of Khashoggi, a respected journalist who was a columnist for The Washington Post, shocked the world. But as Akbar wrote, instead of taking meaningful action, “the U.S. response to Khashoggi’s killing has been too puny to deter future abuses” and the kingdom “is restoring its standing internationally, safeguarding itself from consequences for similar crimes in the future.”

He had comments from within the administration and new details on the Saudi lobbying effort. The piece was widely noticed ― and led to many more tips about what’s going on. ―Amanda Terkel

It’s a tiny story with a big message: Republicans will worship Donald Trump no matter how much he humiliates them. Igor Bobic did a nice job explaining that the bowl was a fake award “designed to placate an angry former president” who had been recently whining about Republicans and lying about the election. The headline is mesmerizing and the photo of Scott and Trump really delivers: You get to see the bowl.

When our bureau chief, Amanda Terkel, asked us to choose a colleague’s story for a year-end list, I went back and looked at our internal messages from that Monday in April. Igor had asked our team if he should write about Scott giving Trump a tiny bowl, and several people were immediately like, YES.

I think I missed the conversation, because after Igor filed the story, there was a message from me saying, “so Igor just filed actual poetry?” ―Arthur Delaney

How Progressives Fought To Put Money In Parents’ Pockets — And Won

Sen. Sherrod Brown (D-Ohio) has been in elective office since 1975, but his “best day” came relatively late in his political career. It happened this year, he told Tara Golshan and Arthur Delaney, when Congress passed an expanded child tax credit in the $1.9 trillion American Rescue Plan. Brown and other progressives have fought for years to put more money in parents’ pockets, but it took a pandemic and President Biden’s sweeping rescue package to get it across the finish line. Now that Sen. Joe Manchin (D-W.Va.) has torpedoed Democrats’ hopes of making the credit permanent, here’s how they managed to make it at least a temporary reality for millions of parents — and a blueprint for how they might bring it back. —Liz Skalka

Why You Can’t Out-Organize Voter Suppression

Over the summer, the Biden administration was under intense pressure to put more effort behind getting voting rights legislation through Congress. While Biden had used aggressive language to attack Republicans for their attempts to restrict voting rights, civil rights groups said that behind the scenes, his team wasn’t doing enough to lean on lawmakers to do something about it. White House officials reportedly believed that it was possible to “out-organize voter suppression.”

Paul Blumenthal eviscerated that argument. He looked at the financial and human costs ― and noted that it’s impossible to organize when Republicans have, in some places, made that very act illegal. ―Amanda Terkel

The Secret Service Has To Protect Former Presidents — But What If They Are In Jail?

Former President Donald Trump upended the norms of the presidency during his term in office, but that legacy hasn’t dimmed now that he’s out of the White House. Trump could be the first former president to face criminal prosecution and end up in prison. S.V. Dáte examined the question of, if Trump does get locked up, will Secret Service agents be there with him?

As you might imagine, the statute governing the former presidents’ Secret Service detail — which stipulates they receive protection for the duration of their lives — doesn’t tackle the issue. Experts agree, however, that it would put the Secret Service in an unprecedented spot. —Liz Skalka

Glenn Youngkin Distanced Himself From The NRA. It Probably Helped Him Win.

This piece is great because Daniel Marans put attention on a key dynamic in the Virginia governor’s race that nobody else seemed to catch, despite all the national attention this race got. I grew up in Virginia, and Marans was right: It was extremely weird for a Republican gubernatorial nominee here to distance himself from the NRA and gun rights. I didn’t know this about Youngkin until I read Marans’ piece, and it’s clear he did this to win over Democrats and independents, particularly in Northern Virginia. It worked, too. I appreciate that Marans caught this and showed this smart (if purely political and unprincipled) calculation by Youngkin’s campaign. ―Jennifer Bendery

This summer, Jennifer Bendery deployed her unique source network and subject matter expertise to produce a powerful series on an internal struggle in an iconic part of the LGBTQ rights movement, the nonprofit group Human Rights Campaign (HRC).

Jen offered unparalleled insight into an internal fight over HRC’s then-president, Alphonso David — a key aspect of the national conversation around sexual misconduct by then-New York governor Andrew Cuomo and a broader reckoning among top Democrats and their allies.

Jen’s first piece laid a strong foundation: She obtained a recording of an internal HRC staff meeting over David’s relationship with Cuomo, and astutely juxtaposed recently reported revelations about their collaboration with HRC’s values and its staff members’ views. She followed up with vital further reporting on the group’s moves toward accountability and additional missteps, like trying to intimidate its own employees.

I loved Jen’s work here because she used a microcosm to explore a dilemma millions of progressives were grappling with, all the while showcasing HuffPost’s signature blend of rigorous reporting and sharp perspective. ― Akbar Ahmed