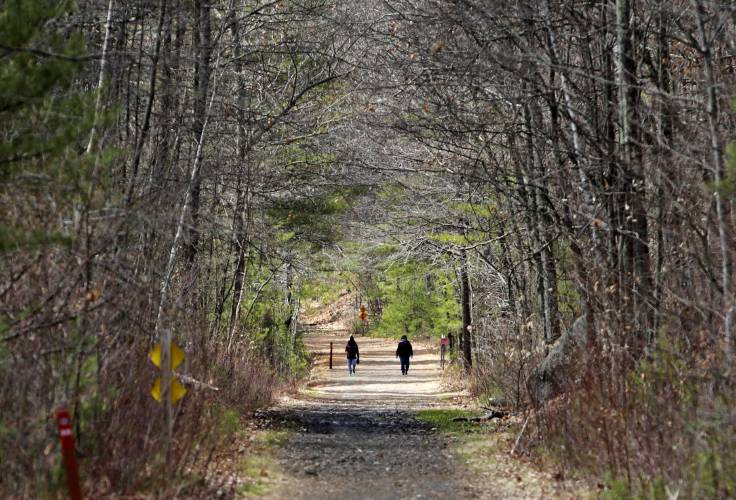 In Londonderry’s Musquash Conservation Area, shooters and hikers coexisted peacefully for years. Then in 2014, came the turning point.

Residents appeared before the town council to voice concerns over gun owners in the space, a 1,000-acre wooded expanse dotted with ponds and walking trails. Hunting on the land was one thing, residents argued, but some visitors were using the woods for year-round target practice.

The concerns multiplied. Town councilors convened a study task force. Eight months later, the council found a solution: Councilors voted in 2015 to restrict the use of firearms to hunters with licenses from the state Fish and Game Department, and only during turkey and deer season.

“There was quite a hubbub,” said Assistant Town Manager Lisa Drabik. “You know, when a couple people start complaining at a town council meeting, and then more people find out about it. Like: ‘Oh yeah, that makes me nervous too. I won’t go in there anymore because of it.’ ”

The ordinance has stayed on the town books. But to some second amendment advocates, it should never have been passed in the first place. And next year, lawmakers are weighing a tool that could empower residents to dismantle it.

A bill moving to the Senate floor in early January would explicitly bar towns and cities from enacting firearms regulations on municipal-owned property, and would allow residents to sue the town to force officials to remove the ordinances. Residents who sue could get $10,000 in court settlements. Town officials who lose a lawsuit could be forcibly removed by the governor.

The bill, House Bill 307, has pitted firearms rights groups – from the National Rifle Association to Gun Owners of America – against town officials and gun safety advocates. And it has reignited debates over how far “local control” should extend in the state.

HB 307 calls for “uniform firearms laws in the state” by requiring towns to immediately remove any local ordinances or regulations on firearms. But the mechanism to do so is unusual.

Under the bill, if a person believes a town has passed a firearm regulation in violation, that person may write a letter to the town saying so. Once receiving the letter, the town would have 90 days to remove the regulation using its local legislative process, without a chance to object.

If after 90 days, the town has not removed the regulation, the person is allowed to take the matter to Superior Court, where the bill will give the person automatic standing. The court could issue a fine to the town ranging from $500 to $5,000, depending on whether the violation was “inadvertent” or was committed “purposefully,” “knowingly,” “recklessly,” or “as the result of gross negligence.”

If the person suing the town is a resident, the court shall award them $10,000 in liquidated damages, in addition to their attorney’s fees.

And if a court finds that an official has violated the new law, its ruling could allow the governor to forcibly remove the official from office, under the legislation.

The bill – which passed the House 191-162, received a 3-2, party-line recommendation to pass in the Senate Judiciary Committee, and is on its way to a vote on the Senate floor – would introduce a new, punitive system of judicial review in the state.

To town officials and gun safety advocates, it’s a disproportionate intrusion into local affairs, and one they’re trying to stop before it reaches Gov. Chris Sununu’s desk. “It could have a chilling effect, I think,” said Drabik. “On how our local elected officials may act, what (items) staff might recommend.”

But to the bill’s sponsor, Rep. Norman Silber, the financial punishment is the point of the bill. Towns should already not be passing firearms regulations according to state statute, Silber argues; HB 307 is there to ensure that any that have done so reverse course.

“There was concern by myself and others in what I commonly referred to as the Second Amendment community – people who are ardent supporters of the Second Amendment to the U.S. Constitution – that we needed to do something to strengthen the existing preemption law,” said Silber, a Gilford Republican.

Silber and other firearms rights advocates say the heart of the issue is simple: New Hampshire is not a “home rule” state. Towns may only pass policies they are expressly empowered in state statute to pass. If the Legislature has not explicitly delegated the power, or is silent, towns may not proceed.

New Hampshire already has a law preventing most local firearms regulation. RSA 159:26 stipulates that only the state has authority over firearms laws related to use, possession, sale, taxation, transportation, and other areas.

Towns that have imposed firearms restrictions around parks and watersheds, have been ignoring that law, Silber said.

“The local authorities really are serving as a legislative branch when they enact these things. And so they’re just basically ignoring the basic legislative function of the General Court,” he said, referring to the Legislature.

The existing restrictions on towns outlined in RSA 159:26 don’t mean gun owners have carte blanche to do anything. RSA 644:13 prohibits discharges of firearms “within the compact part of a town or city,” a designation that covers parks, playgrounds, buildings, school buildings, outdoor public gathering places, and dense neighborhoods. People who use firearms inappropriately or recklessly can still face criminal charges. And towns can regulate businesses that sell firearms and knives using zoning laws – provided they use the same rules for all businesses.

Modeled after similar law in Florida, HB 307 is simply meant to enforce RSA 159:26, Silber said, and protect residents who are being affected by the regulations.

“If the local ordinances contravene state law, you’ve got to hire a lawyer, and you’ve got to defend yourself,” he said. And even at the end of the day if you successfully get the charges against yourself thrown out, then the law is still on the books, and you have to eat your attorneys fees.”

Cordell Johnston, the government affairs counsel at the New Hampshire Municipal Association, sees the law in a darker light. To Johnston, the bill would close off the one area in which he says towns do have the authority to regulate firearms: their own property.

But the disciplinary measures and fines against town officials pose an even bigger problem, Johnston argued.

“Town selectmen are volunteers,” he said. “…With rare exceptions, they’re not legal experts. They’re not lawyers. And they’re not intimately familiar with the limits of town authority. And so towns inadvertently pass ordinances all the time that may not be within their authority.”

A town might pass a rent-control policy it’s not authorized to, or a speed limit that isn’t allowed. In cases where the policy is not legal, a resident may take the matter to court and strike the ordinance down, Johnston noted.

HB 307’s proposed addition of financial damages and professional repercussions against towns and their elected leaders, including removal from office by the governor, is unconstitutional, Johnston argues.

“It’s intended to be hostile to local government,” he said.

Johnston argued applying a punitive approach to local firearms regulations is a slippery slope that could lead to legislation imposing other limitations on towns’ authority.

“What’s the next thing?” Johnston said. “If they impose a speed limit where they’re not allowed to, are they going to be fined for that?”

Across the state, officials and lawmakers have pointed to a number of local regulations that could be upended by the bill.

In Portsmouth, the city has barred firearms in public parks. The University System of New Hampshire has similar regulations among its colleges and universities dictating firearms use.

And in Londonderry, officials like Drabik argue the law would undermine the democratically passed policy to limit shooting in the Musquash Conservation Area.

“We view this as really an issue of local control,” she said. “We understand as a town that the regulation of firearms, in terms of sales and permitting and all that – that’s not within our purview. This, again, is just us having local control to do what’s best for our community on municipal property.”

Johnston and other opponents have raised other concerns about the effect of the legislation on town watersheds. Bullet casings left behind by visitors using firearms can leach lead into the watershed, which can have health effects down the road, Johnston said.

The new law could threaten current bans on discharging firearms around Lake Massabesic, the primary watershed for the city of Manchester.

And it could dismantle another conservation easement on the lake: Auburn’s Audubon Center. The center’s easement stipulates that firearms may not be discharged on the property, Town Manager Bill Herman said.

Herman is opposed to the bill. “In my view, local governing bodies in particular are responsible for the public property within (their) borders,” Herman said.

Silber is aware of the worries of town officials. But he says that changing town officials’ behavior is exactly what his legislation is attempting to do.

“The alternative, of course, is for someone to openly flout the local ordinances that deal with these restrictions, get themselves charged … and take it all the way up to the state Supreme Court,” he said. “You could use that as a precedent perhaps in other places. But it doesn’t put the fear of God into the local officials in these other municipalities.”