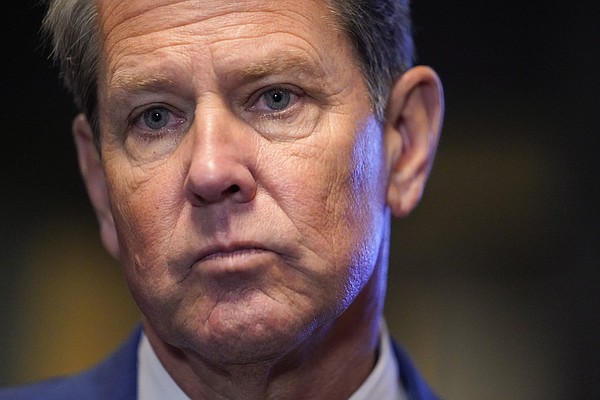 SMYRNA, Ga. — Facing an unusual challenge from fellow Republicans in his bid for a second term, Georgia Gov. Brian Kemp said Wednesday that he will push for a new state law that would loosen requirements to carry a handgun in public.

Kemp made the announcement at a gun shop in the Atlanta-area city of Smyrna that bills itself as the “world’s largest gun store,” where he was joined by members of the National Rifle Association and state lawmakers.

Kemp did not lay out specific changes that he was seeking but expressed support for what gun rights advocates call “constitutional carry.” Multiple bills purporting to advance that idea in the state Legislature would do away with the need for a license to carry a handgun in public — either openly or concealed on one’s body. The current license requirement includes a background check.

“Building a safer, stronger Georgia starts with hardworking Georgians having the ability to protect themselves and their families,” Kemp said. “In the face of rising violent crime across the country, law-abiding citizens should have their constitutional rights protected, not undermined.”

The move drew condemnation from gun-safety advocates and the campaign of Kemp’s likely Democratic opponent in this year’s governor’s race, Stacey Abrams.

Kemp emphasized his support for the 2nd Amendment during his first campaign for governor, appearing in multiple ads with shotguns, including one in which he brandished a shotgun at an actor playing a suitor of one of his daughters.

“The same guy who pointed a gun at a teenager on TV now panders with reckless proposals threatening Georgia lives,” Abrams’ campaign manager, Lauren Groh-Wargo, said in a tweet.

More than 20 other states allow concealed weapons in public without a permit, according to Stateline, an initiative of the Pew Charitable Trusts.

Kemp endorsed “constitutional carry” during his first campaign, but has been less vocal about the policy since taking office. He failed to mention the issue in his 2019, 2020 or 2021 State of the State speeches, when governors urge their top priorities on lawmakers.

He said Wednesday that he has been fulfilling campaign promises while also dealing with the pandemic and needed the Legislature to pass a constitutional carry bill before he could sign it. Georgia House Speaker David Ralston has indicated that he is open to some form of permitless carry legislation this year after setting aside a gun-related bill in the closing hours of the regular session last year, saying it was too soon after the shooting deaths of eight people at massage businesses in metropolitan Atlanta.

But one of Kemp’s Republican challengers, former U.S. Sen. David Perdue, has identified “constitutional carry” as a top issue and slammed Kemp for failing to deliver it. With support from former President Donald Trump, Perdue announced in December that he was entering the governor’s race.

He and another Republican challenging Kemp, Vernon Jones, criticized the governor ahead of Wednesday’s announcement.

“I’m glad Brian Kemp is answering my call for constitutional carry in Georgia,” Perdue tweeted late Monday. “But real leaders lead from the start — and it’s time Georgia had a Governor who shows principled leadership when it matters most.”

Kemp appeared to hit back, saying in his remarks at the gun shop that the view that people have the right to carry a firearm without state approval “has recently become popular for others as we enter campaign season.”

Georgia currently requires people to obtain licenses to carry loaded handguns outside their own homes, businesses or cars, although people can carry rifles and shotguns in many places without a permit and carry unloaded guns in cases.

To obtain a weapons license, state residents must submit an application and fee, and undergo fingerprinting in addition to a background check. Convicted felons and people who have been hospitalized for mental health problems or received treatment for drugs or alcohol in the years preceding the application are not eligible.

America must stop preparing for school shootings and start preventing them – The Daily Mississippian
NJ Republican field crowding to challenge Rep. Tom Malinowski
‘He told us to get on our knees, but I said NO’: Texas synagogue account as Cruz demands inquiry
ILA | NRA Wins Case Against Los Angeles County
ILA | Arizona: First Week of Session Sees A Flurry of Firearm Related Legislation Introduced