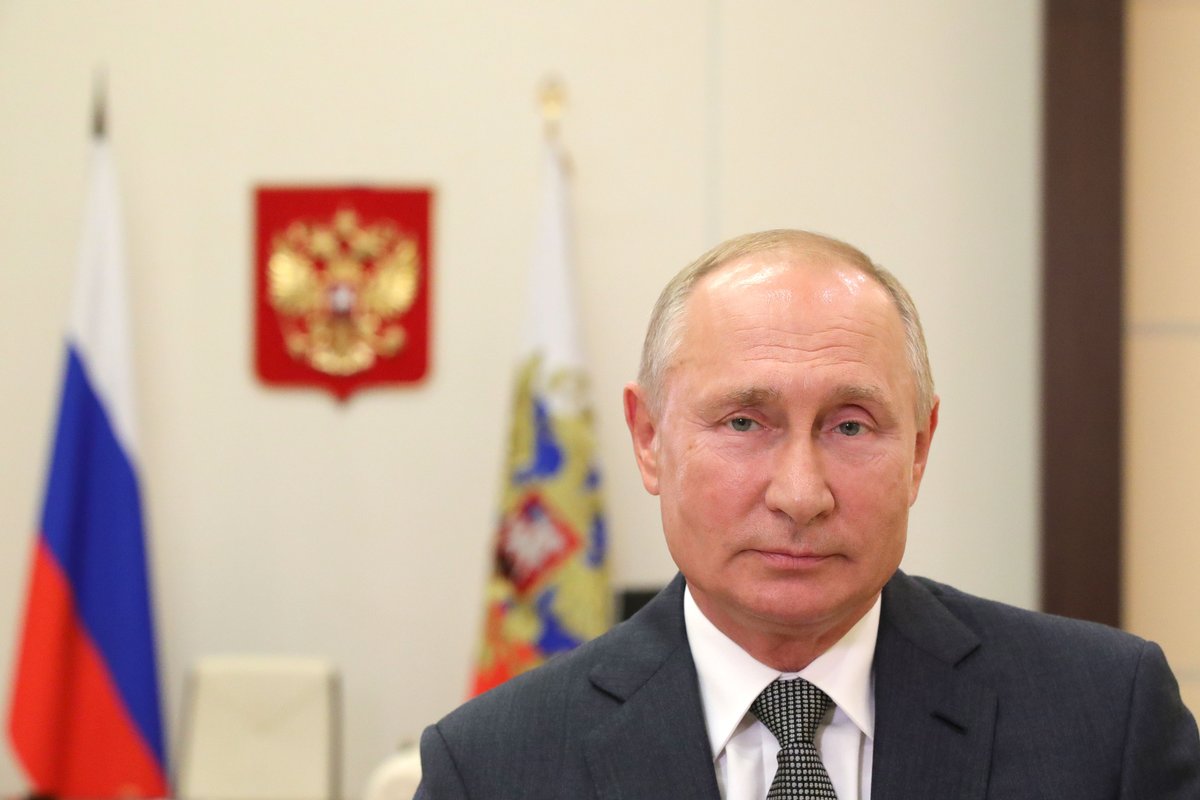 Russia’s invasion of Ukraine has reminded the world of the evils of imperialism, while also exposing alarming fault lines in American politics. Mike Lofgren, a former Republican Congressional aide who has since denounced the party as a “nihilistic death cult,” is in a unique position to clarify what is happening in Russia and the bizarre affinity some members within the Republican Party have for Putin’s aggression.

From 1995 to 2004, Lofgren was a GOP budget analyst for national security on the staff of the House Budget Committee. From 2005 until his retirement in 2011, he was the chief analyst for military spending on the Senate Budget Committee. Lofgren has a master’s degree in U.S. History and another Master’s in European History.

Analysis of Putin’s horrific actions in Ukraine brings together Lofgren’s two areas of expertise: foreign policy and the descent of the Republican Party into authoritarianism and white nationalism. We spoke on the phone on March 14.

Q: You’ve condemned the invasion of Ukraine as a war crime. How do you feel about critics of U.S. policy who have adopted a more sympathetic view of Putin, and have advocated for U.S. neutrality?

Lofgren: Those who excuse the invasion of Ukraine say the United States goaded Putin to attack Ukraine. This goes back to the belief that the expansion of NATO is responsible. I had some questions at the time whether the expansion was a good idea, but, in retrospect, you can look at [it] in [one of] two ways: Did it provoke Putin or did it put us in a better position to deal with his aggression?

Proponents of the critical view include George Kennan, one of the greatest U.S. experts on Russia in the twentieth century, but that doesn’t make his opinion sacrosanct. He was the father of containment policy after World War II, but he [advised] use of counterforce when the Kremlin advances . . . . He was a complicated figure who did not really understand the United States and its political imperatives, and he became estranged from it. He was not in favor of women or Blacks voting. He was not an infallible savant.

John Mearsheimer is another leading voice against the U.S. policy on Ukraine. He’s a respectable foreign policy analyst. However, he’s too far into realpolitik, and doesn’t consider the moral issues involved. He completely discounts the background of the countries that became members of NATO. They were Soviet satellites for forty years, and in some cases, like the Baltics, even longer. They wanted no part of the Soviet Union, and they wanted to join NATO.

Pat Buchanan says we should align with a white Christian power against the “Asiatic and Islamic world.” He’s said that for twenty-five years. He’s also written books arguing that we shouldn’t have fought the Second World War. That’s not a morally persuasive case, but I bring him up because he was on the fringe until about 2012 when the Christian right, and other elements of the Republican coalition, like the National Rifle Association, discovered how much they had in common with Putin’s Russia.

Then, when Trump was nominated, he became the Putin-sympathizers’ champion. Although Congressional Republicans are now overwhelmingly in favor of Biden’s policy on Ukraine, that could turn on a dime, because the base is more receptive to what Trump or Buchanan are advocating than to elected Republican officials.

Q: Trump is praising Putin. Tucker Carlson is so sympathetic to Putin that the Kremlin is instructing state media to feature clips of his program on its broadcasts. Madison Cawthorn, a Republican Congressmember from North Carolina, is claiming that Ukraine is evil. Why does the American right have such a love affair with Putin?

Lofgren: Putin rules on the basis of total cynicism. The Soviet Union claimed it was working for the eventual paradise of the workers. [In the post-Soviet era,] Putin doesn’t say that. He says, “You think we’re bad? You’re just as bad.” It is an eternal game of whataboutism.

This is exactly how Republicans seek to govern. They have no policy ideas. They are cynical in suddenly changing from one position to another. They try to find scapegoats, as Putin does. They play the victim, as Putin does, and they spread cynicism that everything is false, and there is nothing you can trust. Once you undermine social trust and belief in objective reality, you’re halfway to running the country.

Q: Could you elaborate on how rightwing Christians are more sympathetic to Russia?

Lofgren: Russia [is] a kleptocracy where people pretend to work, and the bosses pretend to pay them. That’s why they are doing so poorly on the ground in Ukraine. In the United States, we are used to waste, fraud, and abuse in the defense establishment. But in Russia, it is just open season for thievery. Investigations are revealing that Russian pilots have recently ejected from their stricken aircraft, and their parachutes didn’t open, because they were never packed properly.

That’s the kind of society you get in Russia, but [these rightwing] Christians only see that Putin has changed the orientation from an atheist state to one where Orthodox Christianity is the dominant religion. White supremacists in the United States also believe that Putin is holding off the advance of the Islamic and Asiatic world. Also, Russia makes heavy weather of being anti-gay—which has resonance on the Christian right.

Q: How do you react to the argument coming out of certain sectors of the left that the U.S. invasion of Iraq disqualifies it from intervening in Ukraine?

Lofgren: The United States did lose moral authority in Iraq, and there is no way around that. But that does not address the objective situation of maternity hospitals being bombed, cities being under siege, and people melting snow for drinkable water. I argued against the invasion of Iraq, and I believe it was wrong. But the fact that the United States was wrong to invade Iraq doesn’t make Russia right to invade Ukraine. Going back to history, Great Britain had a lot to answer for in its international conduct, but that wouldn’t mean Hitler was justified in invading Poland or bombing London, or that the United States shouldn’t have aided Britain.

Q: What does Republican sympathy for Putin portend for U.S. democracy?

Lofgren: It portends many things, none of them good. However, there is a clarifying effect to Putin’s invasion since it shows the stakes of this theoretical admiration for a dictator. He’s flattened Chechnya, invaded Georgia, annexed Crimea, and leveled Aleppo, a historic city in Syria, but this is, somehow, different.

Maybe because it’s Europe, and Europeans are sympathetic to the Ukrainian refugees, because they look like them. It isn’t to their great credit, but at least in this case, they are doing the right thing. It was different when the refugees were coming from Syria. Similarly, the world is taking account of why the Ukrainian people are suffering, and it is because of Putin’s policy.

Q: What is the solution?

Lofgren: Given how poorly the Russian army has performed, Putin has two cards to play: The first is aid from China, and that is pending now; the second is the use of nuclear weapons, and that would end the ball game. I sympathize with the emotional response to Ukrainian suffering, asking why can’t we do more to stop it. But we must not escalate a conflict with a power that has 4,500 deployable nuclear weapons, especially when they’ve already threatened to use them against the Scandinavian countries when they considered joining NATO.

In terms of military aid, ground-based anti-aircraft missiles are mobile and can be hidden, and have been very effective so far. Getting more of those into Ukraine is probably our best option now.

Sanctions are widely seen by foreign policy analysts as ineffective because of past failures in Iran and North Korea. Those sanctions involved pre-modern countries, decades ago, that never had the Internet, a real middle class, or Western consumer goods. Beginning in 1990, Russia had a nascent middle class. One of the biggest McDonald’s in the world is in Moscow. They have shopping malls.

Because of the [specifics of] Russian history, there is a pendulum swing between accepting and rejecting the West. In the 1990s, Russia accepted the West, embracing its technologies and lifestyle. When that is cut off, especially for young people and educated people, Russians will see that Putin has broken his bargain. The bargain was, “Nobody messes in politics. That’s mine. In return, you’ll get a semi-decent and stable life.”

Since World War II, we have had the morally objectionable and dubious luxury of fighting wars in [developing] countries mostly away from nuclear facilities, megacities, or manufacturing hubs. I would hope that the anxiety over the nuclear plants at Chernobyl and Zaporizhzhya, and the economic effects of this conflict all over the world, would at least appeal to our selfish instincts and teach us that modern war is too horribly destructive to be an instrument of any country’s policy.

Like slavery or cannibalism, war is a barbaric relic that must be banned.