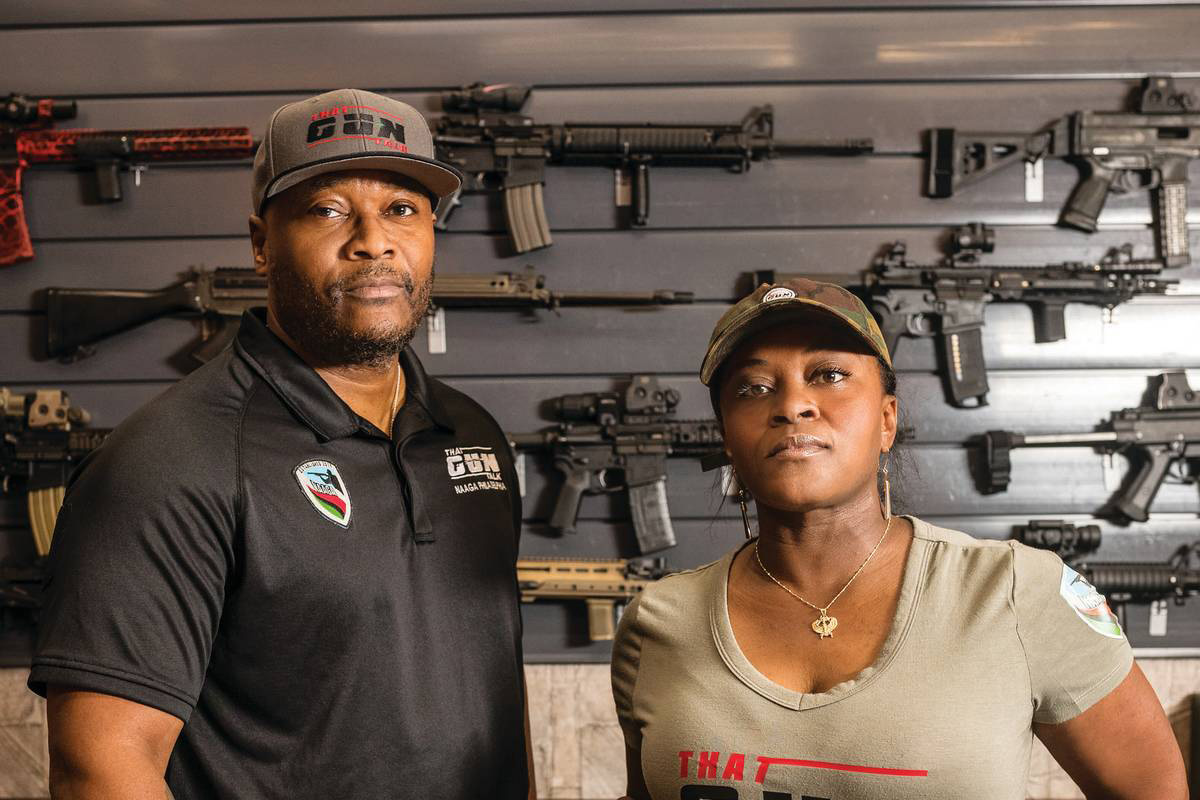 Local members of the fast-growing National African American Gun Association hope for the best, even as they prepare for the worst.

Work brought CT Green to the Main Line about four years ago. It’s the first suburban experience for the 33-year-old New Orleans native, and he has no reason to feel unsafe in his Berwyn neighborhood. “There are no issues,” says the Hurricane Katrina survivor. “Everyone’s nice.”

It’s certainly a far cry from Philadelphia’s Strawberry Mansion section, where Green first landed. One day, he parked and headed into a store he was calling on for his job with LG Electronics. After a 20-minute pitch to the owner, he returned to his car to do some paperwork. That’s when he spied several men in his rearview mirror. Taking notice of his Louisiana license plate, they fanned out, making eye contact with him, then each other.

Sensing trouble, Green reached for a utility knife and quickly drove off. “I had to leave,” he recalls. “They were hoods, and I’ve had close calls like that before.”

Next time, Green vowed, he’d be better prepared when “things go south.” He headed to King Shooters Supply in King of Prussia, where he purchased a handgun for himself and a shotgun for his wife.

In every respect, the Greens are out to reverse the damning stereotype that comes with being Black and armed. Without question, they’ve always viewed firearms as “dangerous items,” seeking training and support in a Philadelphia chapter of the National African American Gun Association. “It all seems very normal,” says Green, who has a concealed carry permit. “There are no gun nuts.”

NAAGA’s membership has grown exponentially since it was founded in Atlanta by Philip Smith in 2015. Initially thinking he’d attract maybe 300 members in the first year, he had that many in his first month, with 8,000 by the end of 2015. There are now 40,000 NAAGA members in 130 chapters nationwide. Those numbers might’ve been even higher if COVID-19 hadn’t put a lid on two straight national conventions.

NAAGA member logs include NFL players, rappers, doctors, and active and retired law enforcement and military personnel. “Let’s face it, I caught lightning in a bottle,” says Smith, the organization’s 62-year-old president. “NAAGA was in the right place at the right time. A pandemic and national racial unrest never come around at what can be the right time, but NAAGA was sitting in the roadway when both arrived. We began filling a need.”

Philadelphia’s spiraling gun violence is well documented. Last year, its police department reported more than 560 homicides in the city—nine out of 10 of those committed with firearms. In the summer of 2020, riots and looting led to the deployment of the National Guard in the city. “I’ve seen police brutality first hand,” says Green. “The last few years, it’s been steadily building up, and there’s never been a cool-down period.” 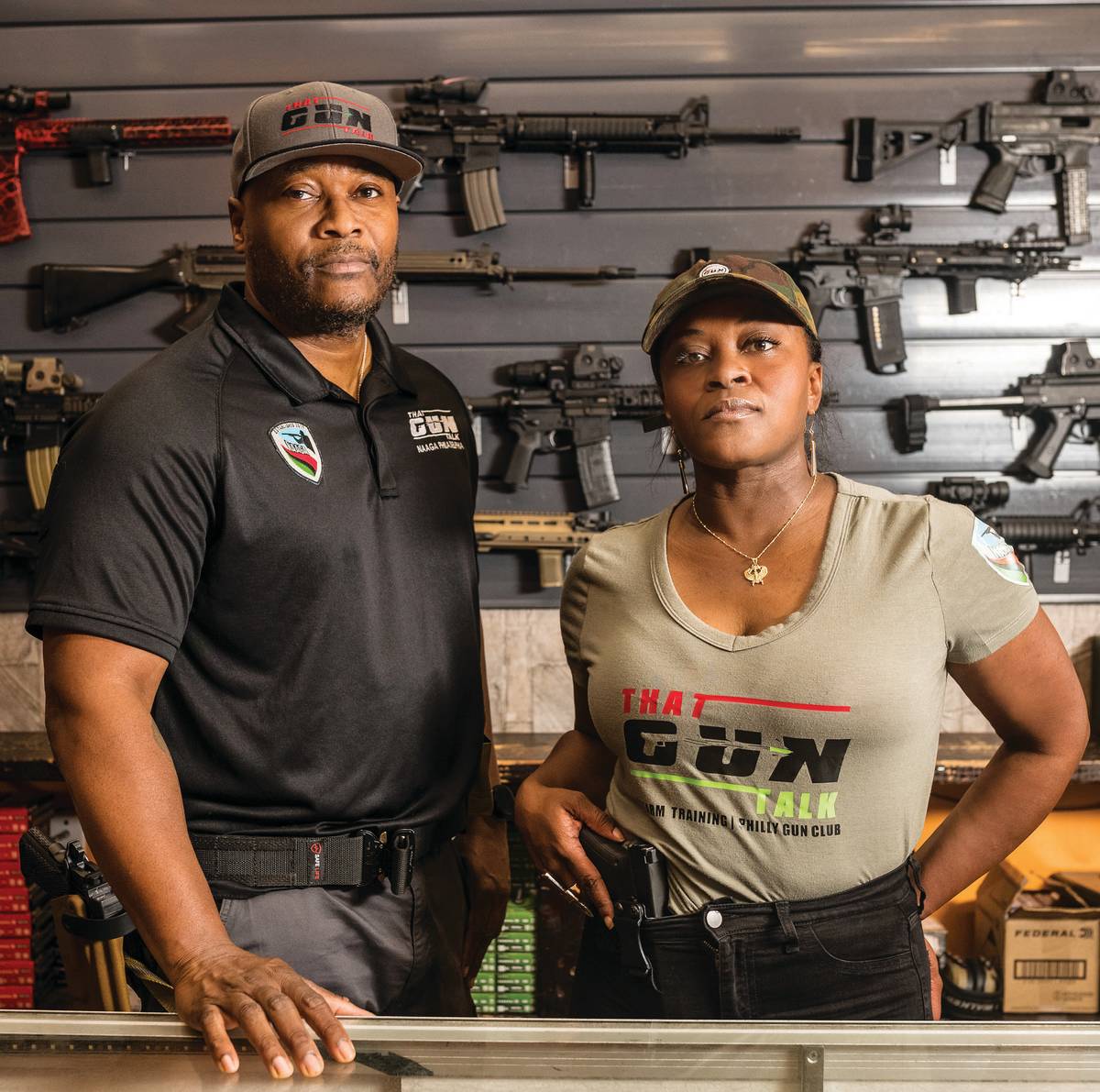 For Green, COVID-19 was the turning point. “It worries me. I don’t want to be caught unarmed if things go wild and crazy in some kind of race war,” he says. “It’s not just criminals becoming criminals. It’s people more desperate for money, food, medicine or something for their kids—and that’s a more dangerous person. A lot of people are re-evaluating things. I’m not Republican, I’m not Democrat. I lean toward policy. But all policy right now is so out of touch.”

Harry Mobley Jr. grew up in the Frankford section of Northeast Philadelphia—“wholeheartedly reason enough to explain why I should carry,” he says.

Now living in Wynnewood, the retired Delaware County corrections sergeant has had a concealed carry permit since he was 21, the earliest allowable age by federal law. He’s a hunter, a recreational shooter and a member of a NAAGA chapter that meets near St. Joseph’s University. “It’s very sad, what’s going on,” he says. “I love my city—always have and always will. But it’s not a place I’d consider moving back to.”

Mobley has been at the other end of a firearm before—more than once. A best friend was shot in the head coming out of a movie theater with his girlfriend a year after he graduated from high school. “I had to come back from college to bury him,” says Mobley. “I’ve seen the dark, tragic, unfortunate side of the harm that firearms can cause. It’s what propelled me into law enforcement. My prayer remains to never have to pull a firearm’s trigger, but I also don’t want to be in a position of not being prepared if I need to.”

Mobley admits to feeling uncomfortable during his 20 years as a member of the National Rifle Association. When statistics were shared at the last annual meeting he attended five or six years ago, Mobley says they showed a Black membership of just 4 percent. (The NRA maintains that it doesn’t ask for demographics upon registration, nor does it question members when they leave.)

Mobley is among the NAAGA chapter members who focus on training. They drill at several ranges, typically Holmesburg Fish & Game in Northeast Philadelphia and Relic Hunter Firing Line in the Lehigh Valley. “Education is the key,” he says. “Practice doesn’t make us perfect, but it definitely makes us better.”

Mobley says guns in the Black community have been a “gift or a curse” and “a quasi-taboo subject.” “For me, it’s always been about having others understand the positive side of gun ownership,” he says. “This right is an American right—an inclusive right, not an exclusive one.”

Not that NAAGA is hurting the NRA and its over 5 million members. The powerful organization has grown by 350,000 members in the past few years alone. “As Americans, we’re all in this together, regardless of color or creed,” says Amy Hunter, the NRA’s media relations director.

For Mobley and others, a NAAGA membership came on the heels of the NRA’s lack of response to the 2016 traffic-stop killing of Philando Castile in Minnesota. “I couldn’t be a member of [an organization that] didn’t sound the trumpet,” Mobley says. “When the rights of anyone—anyone—are violated, you have to step up. NAAGA has given a voice to folks who’ve been ignored for a long time—and it’s here to stay.”

For many NAAGA members, it’s also about growing a narrative that sheds light on certain key historical contributions, from the Civil War-era Buffalo Soldiers to the Civil Rights-era Deacons for Defense and Justice. “It’s our narrative,” says one Philadelphia chapter member, a pastor with a 24-year military career who requested anonymity. “It’s time for activism. We can’t expect others to do this for us.”

He stressed the need for NAAGA to embrace a strategy that’s not based solely on being Black. “We need to have equity, not necessarily equality—and not have it be something we have to ask for,” he says.

Philip Smith grew up in Georgia, where firearms are viewed differently. “Mothers give daughters guns. Fathers give sons guns. Family picnics include shooting competitions. Guns are a positive,” says the NAAGA president. “For me, that alone prompts a different narrative.”

Smith’s NAAGA is sometimes called the “new NRA”—though he’s not comfortable with it. “We’re very different. Do we talk guns and advocate for the Second Amendment? Yes. But we give high-fives, and say, ‘Welcome brother. Welcome sister.’ We embrace you,” says Smith. “We don’t point out our differences. We don’t worry about who you voted for, how you dress, who you love, what your car looks like or who’s on your bumper sticker. We say, ‘Let’s learn about guns together without mandates on political, cultural or private leanings.’ We want to grow to the middle.”

Smith notes that NAAGA, though 98 percent black, has over 1,000 white members and a growing Latino and Asian segment—and 40 percent of national and local membership is female. Karise Crew is the founder of the Philadelphia NAAGA chapter dubbed That Gun Talk. Originally from Texas, she recalls sitting with her dad in his truck, a rifle between them and a buck in the back. “It was a hunter’s lifestyle,” she says.

Karise’s husband, Jerel, is chapter president. His Philly-based family enjoyed firearms, too. Years ago, Karise was robbed outside her broken-down vehicle by two men along West Chester Pike between Havertown and Upper Darby. “My husband said it was never going to happen again,” she says. 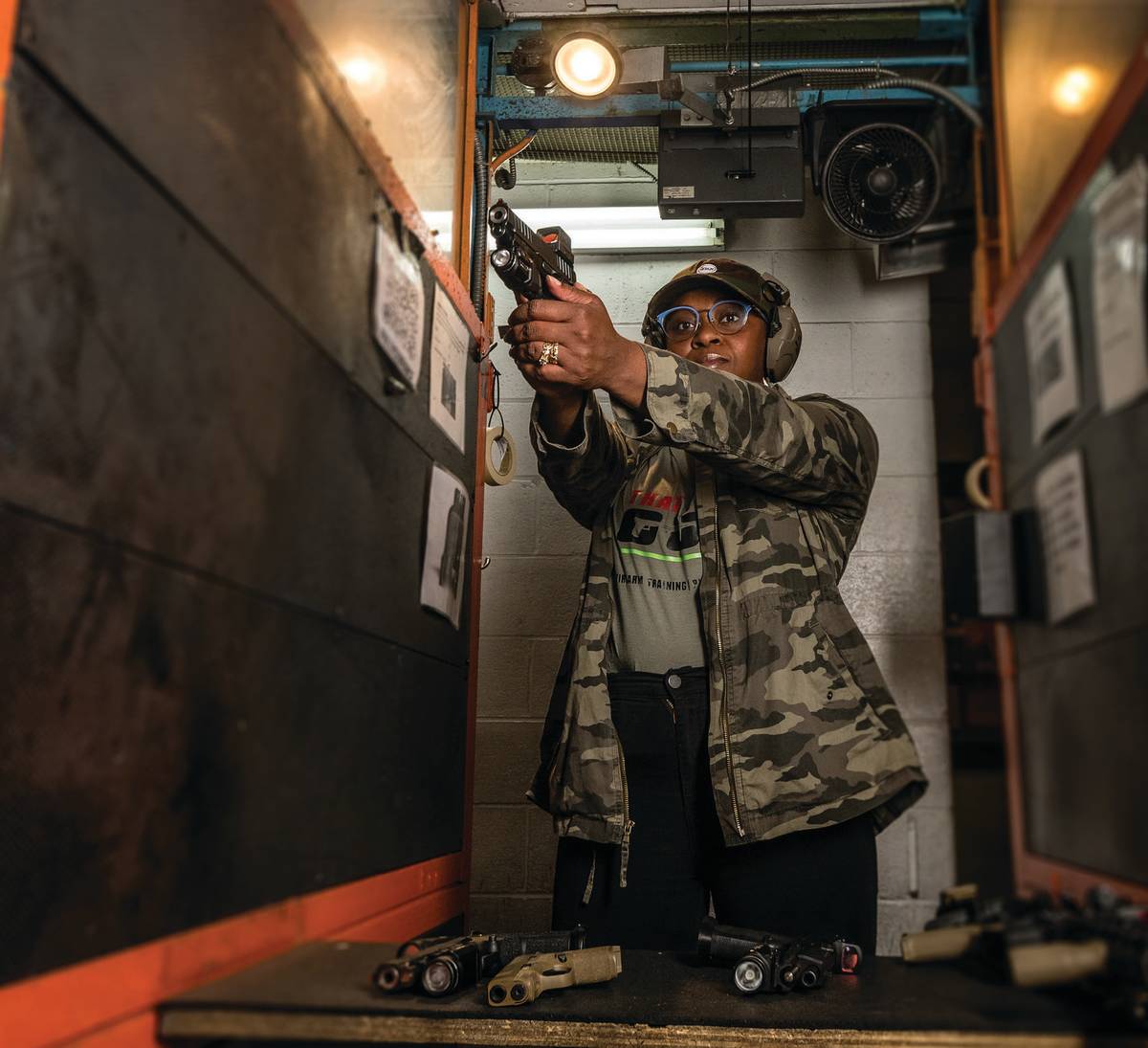 Their NAAGA chapter acceptance letter arrived on Dec. 12, 2020. “We saw a growing need in the community,” says Karise. “It boils down to safety. It’s a mindset among women. So many want to protect themselves.”

Karise sees it every day at That Gun Talk. “There are more single women now and more women in business. Some say their husbands don’t want them to carry, but they say, ‘I’m going to learn and train.’ The women are telling their husbands, then the men come,” she says. “I’m proud of our women. One is 70 years old. Some come in gravely afraid, then leave asking how they can get more involved.”

A harrowing incident involving a Glock 9mm pistol was a turning point in Karise’s relationship with guns. She was headed to Mexico for vacation when a Transportation Security Administration officer at Philadelphia International Airport found the loaded gun in her handbag. “I forgot. I went into shock. I was handcuffed, and I found out there’s a jail in the airport,” says Karise, who’s licensed to carry. “For the first time in my life, I went to jail.”

Karise got her pistol back and her record expunged. Jerel, meanwhile, took a two-day firearm instructor course in Scranton. “I became his first student,” she says.

That Gun Talk recently applied for a grant to help counteract gun violence in Philadelphia. “We have knowledge and want to share it,” Karise says. “People in the African-American community need to understand the rules and laws. We’re behind in learning this information. But part of our contribution is teaching them their rights—not as African Americans but as Americans.”

CT Green’s early interest in guns was mostly the result of watching ’80s police movies. He talks about the “Black stigma” in his low-income neighborhood growing up—“a superstition, almost, that if you have [a gun], someone’s going to shoot you,” he says. “It taught you as a young Black person to fear guns. In the back of my mind, I wanted a gun. But should I have gun? If it’s loaded, maybe it’d go off on its own.” 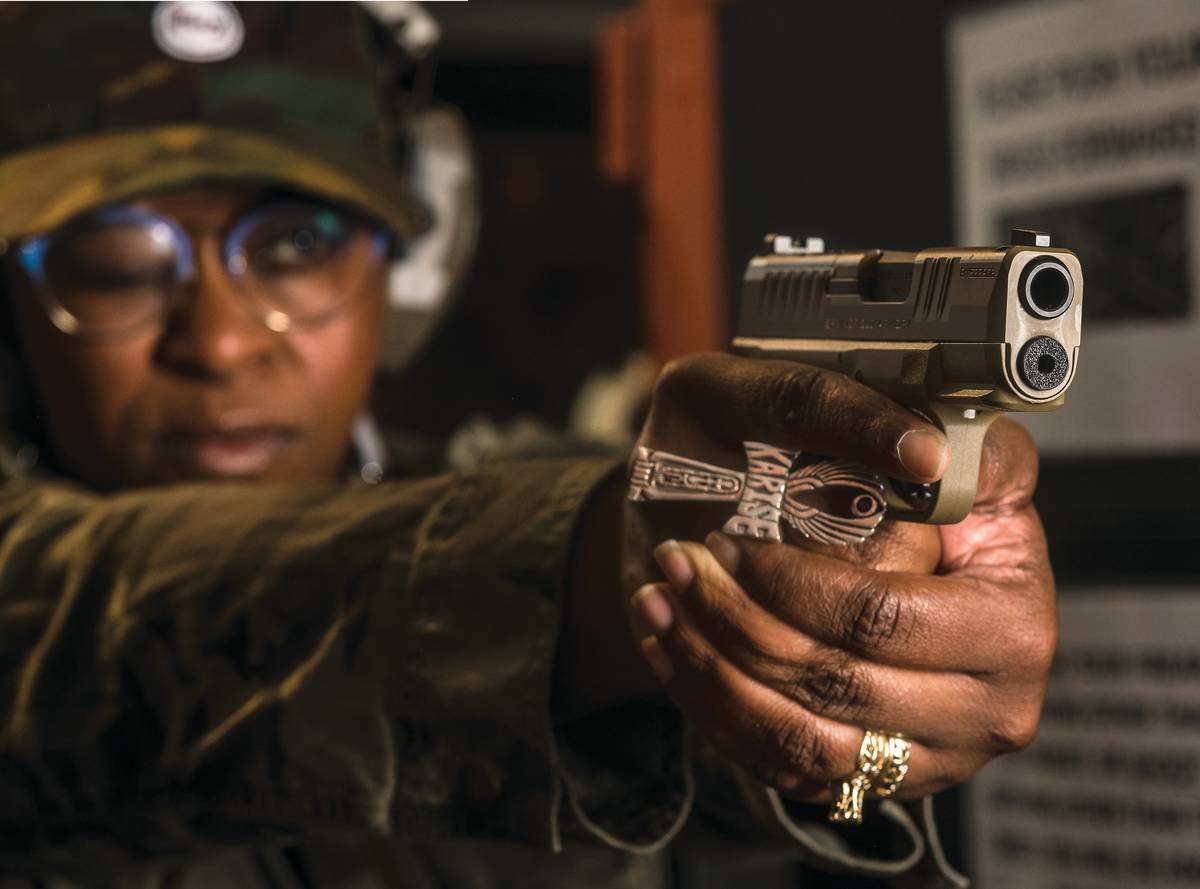 Green discovered NAAGA on YouTube. He says his “simple machine” has boosted his confidence and sense of security. “I own a gun with no ill will,” he says. “I feel safer being armed, but I’m not training to engage. If there’s a mass shooting, I’m trying to get out. I’m not a soldier, I’m not a cop. I just want to make it home.”

Growing up in New Orleans, Green knew plenty of people who couldn’t buy a gun legally—they already had felonies. In sixth grade, a friend pulled a gun and pointed it at him. “He was playing, but his finger was on the trigger,” Green recalls. “He laughed and took it away. He had two full magazine clips. He said he could get me a gun if I had $10, Did I want one? What did I need a gun for? I wanted to play Pokémon. If you’re shot with a bullet, you’re not coming back.”

Related: Race for Peace Works to Bridge Racial Divides in the Main Line

Jan. 6 attack echoes on Maryland’s Eastern Shore as Democrat Heather Mizeur seeks inroads in ‘red’ district of Rep. Andy Harris
Outraged Uvalde Residents Rise Up Against Local Fundraiser for NRA
Joe Biden, Nancy Pelosi issue statements
Brian Kemp Slams Stacey Abrams for Something She Didn’t Do — but He Did
ILA | When Seconds Count, the Police are Only Hours Away