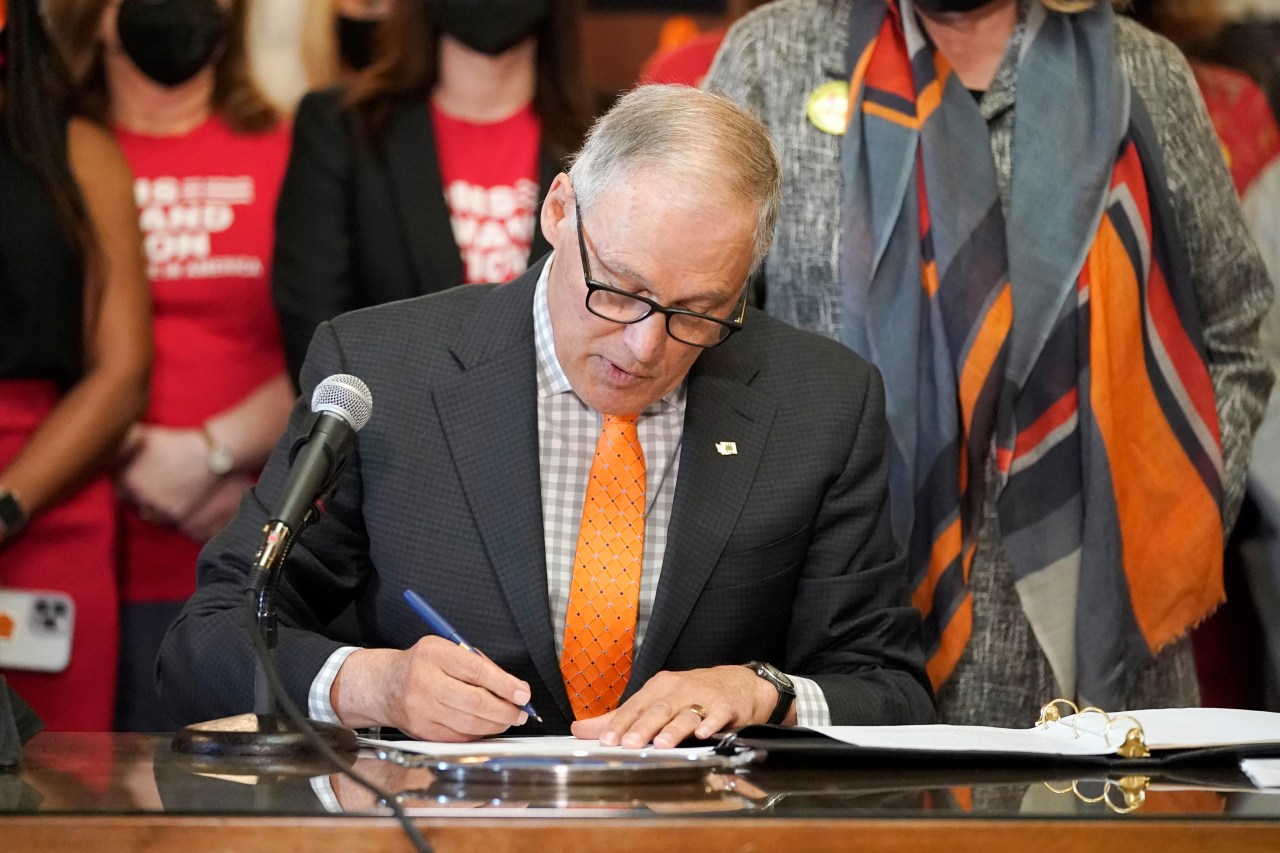 The governor held an event at the capitol in Olympia to commemorate the signing of House Bill 1630, House Bill 1705 and Senate Bill 5078.

“We’re here today because we know the scourge of gun violence is upon our state. Suicide, mass shootings, domestic violence now take the lives of over 780 Washingtonians every single year and amongst our young people, our young Washingtonians, it is the leading cause of death,” Inslee said in his opening remarks.

In a press release, Inslee said this legislation will better ensure people feel safe and free from intimidation when trying to participate in civic activities.

HB 1705 addresses the rise in untraceable homemade ghost guns. It allows hobbyists to continue making guns, but requires the components they use to all have serial numbers.

Inslee said these weapons are often used in mass shootings and the bill was requested by Attorney General Bob Ferguson, who attended the bill’s signing on Wednesday.

Ferguson said he had strong feelings about banning high capacity magazines years ago, but when the shooting occurred at a house party in Mukilteo in 2016, leaving three people dead and one injured, it hit home. He said he had a niece who attended Kamiak High School at the time and her classmates were at the party.

After the shooting, Ferguson said he met with Paul Kramer, whose son Will Kramer was shot in the back at the party. Paul explained how the shooting impacted his son, his family, and the wider community.

“I just remember so clearly, Paul, thinking at some point during that conversation, where I moved from caring about this issue in an, I don’t want to say abstract way, but in a less-concrete way, to thinking, you know, dammit, we’re just going to do this and I’m going to put the full weight of my office behind this,” Ferguson said.

He said he vowed to propose the bill every year until it passed. He didn’t expect it would take six years but was glad to see the bill signed Wednesday.

Washington Republican lawmakers voiced their opposition to the gun bills after the governor signed them.

Sen. Phil Fortunato, a Republican from District 31, said he was upset Inslee signed the bill while the legislative building in Olympia remains closed to the public.


TriMet workers rescue dog, allegedly swung in the air by owner in Portland

“This paranoia of law-abiding gun owners is unproductive. I oppose efforts to demonize anyone who wants to lawfully protect themselves, their families and their constitutional rights – they aren’t the threat. Criminals emboldened by the erosion of our police, thanks to the Governor and his friends in the Legislature, are a threat and won’t be dissuaded from doing harm because of these new laws,” Fortunato wrote in a statement.

Republican Rep. Jim Walsh, from Aberdeen, issued a statement in February when the House Civil Rights and Judiciary Committee passed SB 5078. In the statement he said the bill violates the state’s constitution.

“It puts in place an unenforceable series of restrictions on gun ownership that will limit what law-abiding people can do while offering no practical limit on what felons do,” he wrote.

On Wednesday, he said he felt the bill affects law-abiding hobbyists instead of targeting criminals. He said he doesn’t know why a criminal would spend time assembling a gun when it’s easier to steal one and rub off the gun’s serial number.

Walsh also said he wishes SB 5078 would have clarified its use of the term “transfer.” The bill said it restricts the “sale, manufacture, and distribution of large capacity magazines.” Walsh said Republicans wanted to clarify, for example, if a firearm instructor handing a gun with a 30-round magazine to someone at a shooting range was a violation of the law.

If it is, Walsh said he fears it limits people’s ability to train and improve their proficiency in using firearms and restricts their ability to share firearms with family members and friends.

Walsh said the bill was crafted from a combination of multiple bills and he feels it’s poorly written. He wishes Ferguson and Inslee had focused on making SB 5078 a well-written law instead of something that was “slapped together.”

The Associated Press contributed to this article.