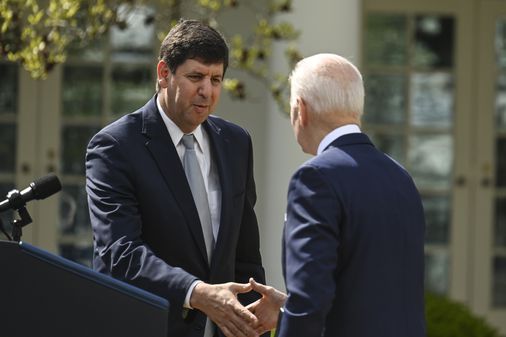 Biden announced that he will tap Steven Dettelbach, who served under President Obama as the US attorney for the Northern District of Ohio, at a Rose Garden event Monday afternoon, seven months after being forced to withdraw the nomination of Biden’s first choice, David Chipman.

Get Today in PoliticsA digest of the top political stories from the Globe, sent to your inbox Monday-Friday.

The ATF has completed the long-awaited rule on ghost guns months after sifting through a quarter-million public comments, but about two months earlier than its acting director had predicted in January. The rule is typically enacted 60 to 90 days after completion.

Gun control activists, who have pressed Biden to fulfill his campaign promise to make the issue a top priority, expressed tempered support for the measures, while calling on the White House to establish an independent office on gun violence. Susan Rice, Biden’s domestic policy adviser, opposes such a move — but strongly supported Dettelbach’s selection, according to people close to the process.

“I’m happy to see President Biden respond to pressure from survivors of gun violence, but over 54,000 Americans have died from guns since President Biden was inaugurated,” said Igor Volsky, executive director of Guns Down America, whose organization began staging protests in front of the White House. “He’s still ignoring calls to establish a White House office of gun violence prevention. That is entirely unacceptable.”

But other major gun control groups, which have also pressed Biden to create the office, viewed the measures as significant. John Feinblatt, president of Everytown for Gun Safety, thanked the White House for “doubling down” on its commitment to eradicating ghost guns and praised Dettelbach as a “strong leader.”

White House officials, frustrated by their inability to pass even minimal changes to gun laws in a Congress narrowly controlled by Democrats, say they have acted more forcefully than Biden’s recent predecessors. They point to their decision to offer up a second nominee to ATF instead of leaving a career official in charge — after acknowledging that they had mishandled Chipman’s nomination — as proof of their commitment.

Chipman, a fiery former bureau agent who had vowed to take on the gun lobby, stepped aside in September after Senator Angus King, Independent of Maine, who caucuses with Democrats, expressed opposition to Chipman after a pressure campaign from gun owners in his state and national groups.

Dettelbach, who served from 2009 to 2016 as US attorney for the Northern District of Ohio, which includes Cleveland, Toledo, and Akron, seems to be a less polarizing figure. He is known for criminal prosecutions, hate-crime cases, and voting rights investigations.

In early 2021, he said he was “interested” in leaving his post at a white-shoe law firm to reclaim his old job. Officials in the Biden administration also discussed whether Dettelbach should oversee the Justice Department’s civil division, which defends administration policies in court, according to people familiar with the discussions.

Dettelbach, a Democrat, has never run a national law enforcement organization and has never worked at the ATF. Rank-and-file agents respect and like the agency’s acting head, Marvin Richardson, according to multiple people who work with the bureau.

If confirmed, Dettelbach would become only the second permanent director in the past 15 years of the ATF, an undersized and underfunded agency hamstrung by the gun lobby and congressional Republicans. On Sunday, White House officials described him as an uncontroversial nominee who had been confirmed unanimously as a US attorney.

During an unsuccessful bid for Ohio attorney general in 2018, Dettelbach, a Harvard graduate who began his career in the Justice Department’s civil rights division under President Clinton, supported an assault weapons ban, universal background checks, and tighter restrictions on gun buyers with mental health issues.

Republicans, already poring over videos and news accounts of Dettelbach’s campaign, are likely to attack him for welcoming the endorsement of Everytown, a leading gun control group.

The National Rifle Association and other pro-gun groups are likely to oppose any nominee who wants to strengthen enforcement and oversight. In 2020, President Trump’s pick for the bureau, Chuck Canterbury, a conservative police union official, was forced to withdraw after several Republican senators publicly questioned his commitment to the Second Amendment.

Larry Keane, a top official with the National Shooting Sports Foundation, a firearms industry trade group that led the charge against Chipman, said he was disappointed that Biden had not chosen to permanently appoint Richardson, who is expected to retire soon.

“The current acting director is a well-qualified African American man,” Keane wrote in a text message Sunday. “We will examine Mr. Dettelbach’s record and qualifications and listen carefully to his confirmation hearing testimony. From what we have seen of his record thus far, we have concerns.”

But Dettelbach, who needs the support of all 50 Senate Democrats, enjoys one advantage over Chipman — a powerful ally in the upper chamber. Senator Sherrod Brown, D-Ohio, is close to Dettelbach, and has assured administration officials he would push hard for his nomination.

“Steve Dettelbach is an experienced public servant who served Ohio as US attorney with honor and integrity,” Brown said in a statement Sunday. “He has demonstrated a strong commitment to justice, inclusive leadership, and to strengthening relationships between law enforcement and the community. He would serve our nation well as ATF director.”

By contrast, Chipman, who serves as a consultant with the gun control group founded by Gabrielle Giffords, a former representative of Arizona, said the White House had done little to defend him after gun rights groups mobilized to defeat him.

The new ghost gun rule is one of the most significant executive actions undertaken by the administration, intended to block the legal sale of weapons that are seen as a growing menace by local law enforcement departments.

Ghost guns are increasingly becoming the lethal weapon of choice for those legally barred from buying or owning guns around the country, especially in coastal blue states with strict firearm laws. In California, ghost guns accounted for 25 percent to 50 percent of firearms recovered at crime scenes over the past 18 months.

The Justice Department’s new rule, which is likely to be challenged in court, changes the definition of a firearm by requiring that major parts needed to assemble a working gun are inscribed with serial numbers and subjected to the same background check requirements as conventional firearms.