WASHINGTON — The Biden administration’s crackdown on untraceable, do-it-yourself firearm kits could push gun regulations back to the political forefront in Texas and across the country ahead of this fall’s elections.

President Joe Biden used a Rose Garden event on Monday to announce new regulations targeting so-called “ghost guns” that can be assembled at home from kits purchased online. The resulting weapons can be just as deadly as those purchased at a gun store but have no serial numbers for authorities to trace if they’re used in a crime.

“Law enforcement is sounding the alarm,” Biden said of ghost guns. “Our communities are paying the price.”

The ghost gun market has exploded in states such as California that have moved to aggressively regulate firearm sales, said Ari Freilich, state policy director at the Giffords Law Center to Prevent Gun Violence.

Texas received a failing “F” grade on the gun law scorecard issued by the group led by former Rep. Gabby Giffords, D-Ariz., who has pushed for tighter gun laws since being shot in the head in 2011 in an assassination attempt.

Gun regulations represent a fraught political issue in many parts of the country, including Texas, where a group pushing for open carry legislation several years ago brought to the steps of the Capitol a machine known as the Ghost Gunner that can quickly produce a working gun. Open carry did ultimately become law in Texas, underscoring the state’s reputation for having lax gun regulations. Biden’s proposal on ghost guns brought swift criticism from groups such as the National Rifle Association, which is holding its annual meeting next month in Houston.

Turner said the proposal unveiled Monday will affect not just federally licensed firearms dealers, but also hobbyists who want to build their own guns.

“Keep in mind, we have been building our own firearms in this country since we landed on the shores of this great country,” Turner said. “President Biden’s new anti-2nd Amendment ‘regulations’ ignore history and will do nothing to help law abiding citizens.”

She predicted the new regulations will inevitably prompt legal challenges, and the Gun Owners of America announced it will go to court to fight the rule.

“Just as we opposed the Trump Administration’s arbitrary ban on bump stocks, GOA will also sue … to halt the implementation of this rule,” Aidan Johnston, the organization’s director of federal affairs said in a statement. The group contends Biden’s action violates the U.S. Constitution and several federal laws.

“I refuse to believe that the gun violence in our neighborhoods, schools and places of worship is acceptable, and I will keep fighting for common-sense legislation to strengthen background checks and keep weapons of war off our streets and out of our schools,” Allred said.

“But instead of working to find common sense solutions to prevent increasing gun-related deaths, Texas continues to implement policies that will only worsen the crisis,” Johnson said. “That is why I am proud of President Biden for taking this critical executive action to help stop the spread of ghost guns, which Texas does not currently regulate.”

Rep. Marc Veasey, D-Fort Worth, shared his appreciation via Twitter.

“This decision will bolster public safety and is a decision that all Americans — regardless of party — can say is common sense,” Veasey wrote.

Biden’s focus on gun regulations could reverberate in races such as the Texas gubernatorial contest.

Texas Democrat Beto O’Rourke abandoned his 2020 presidential campaign before the first primary but only after saying during a debate that “hell yes” the government should not allow private ownership of assault weapons such as AR-15s and AK-47s. 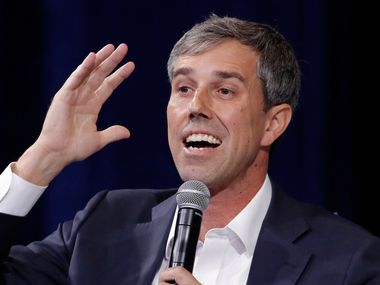 O’Rourke has continued to talk about addressing such weapons and gun violence as he runs this cycle against Texas Republican Gov. Greg Abbott.

In a statement Monday, Abbott campaign spokesman Mark Miner highlighted the small number of individuals who are prosecuted for lying on federal firearm forms.

“Unlike Beto O’ Rourke, Governor Abbott supports the Second Amendment,” Miner said. “President Biden should focus his Justice Department on enforcing existing laws rather than punishing law-abiding citizens. If the President really wanted to do something substantial, he could eliminate the backlog of complaints already filed about gun crimes that have already taken place.”

Republican Party of Texas spokesman James Wesolek said in a statement that every law-abiding American citizen has the right to own, manufacture and accessorize their firearms.

“Creating regulations or hurdles to impede this right is unconstitutional,” Wesolek said.

Republican Dallas-area U.S. Rep. Beth Van Duyne questioned the Biden administration’s focus. “Violent, repeat criminals are unlikely to purchase legal, online gun kits. The ATF should instead be focused on criminal street gangs associated with drug cartels and keeping the violent criminals out of our neighborhoods,” she said.

Sen. John Cornyn, R-Texas, a member of the Judiciary Committee, was traveling and did not have an immediate comment on the proposal. But he previously indicated an openness to requiring background checks to purchase gun kits.

Describing him as a “vocal gun rights supporter,” Politico quoted Cornyn in 2020 saying: “I guess you can look at it that you’re buying an assembled gun or an unassembled gun. To me, the same standard makes sense.” 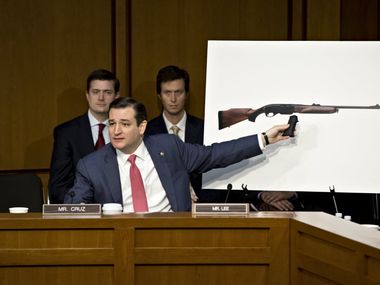 During Monday’s event, Biden also introduced Steve Dettelbach, a former U.S. attorney from Ohio, as his choice to run the Bureau of Alcohol, Tobacco, Firearms and Explosives.

The topic of ghost guns is sure to come up at Dettelbach’s nomination hearing before the Senate Judiciary Committee, whose members include Cornyn and his fellow Texas Republican Sen. Ted Cuz.

“I have deep concerns with the radical direction the ATF has been taking over the past 16 months, including an obvious and growing hostility toward Second Amendment rights,” Cruz said in a statement. “I’ll need to hear Mr. Dettelbach’s views on this issue in considerable detail.”

Full transcript of “Face the Nation” on Nov. 27, 2022
READER’S EDITORIAL: THE GOP AND GUNS
The question is not, ‘What is it about Colorado?’ | John Moore | Arts & Entertainment
Beto, Trump not out for the count
Article: Why Mass Shootings Won’t Get Tough Gun Control