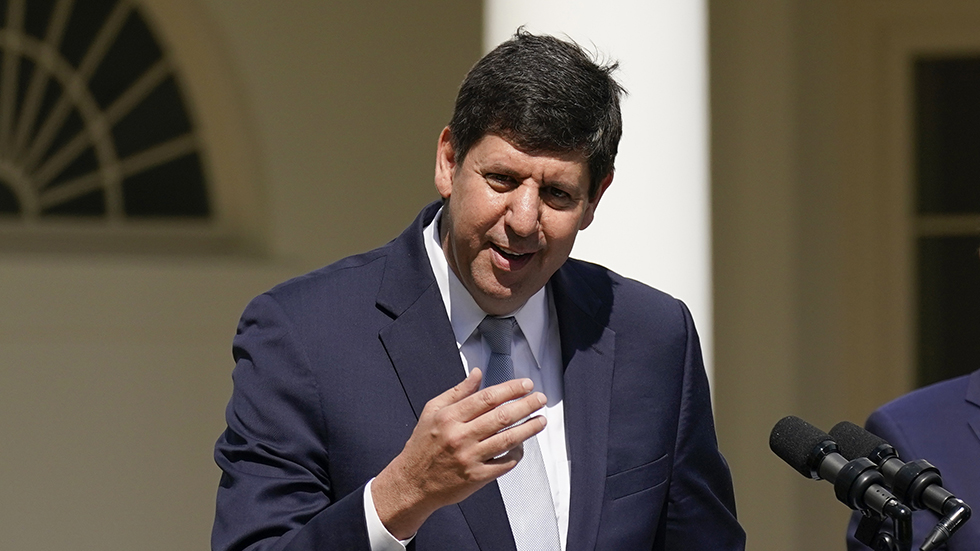 Senate Democrats are preparing for a fight over Steve Dettelbach’s nomination to lead the Bureau of Alcohol, Tobacco, Firearms and Explosives (ATF), against the backdrop of the November election.

President Biden tapped Dettelbach this week, stepping into a proxy battle over gun control months before the midterms, with Republicans eager to paint both Biden and Democratic candidates as “soft on crime.”

The nomination sets the stage for election-year politics to combine with a high-profile confirmation process for a post that has been politically tricky for either party to fill after the last Senate-confirmed ATF director stepped down in 2015.

Sen. Dick Durbin (Ill.), the No. 2 Senate Democrat and Judiciary Committee chairman, praised Dettelbach as “highly respected” and “well equipped to lead” ATF, but also pointed to the political dynamic his nomination is likely to face.

“Confirming a qualified nominee to lead ATF should be a unifying priority in the Senate, yet the problem is the same one that has foiled ATF confirmations since 2015: the gun lobby,” Durbin said.

Dettelbach previously served as a U.S. attorney for more than six years after being selected in 2009 by then-President Obama. He is currently co-leader of white-collar investigations at national law firm BakerHostetler.

His nomination comes after Biden’s first pick to lead the bureau, David Chipman, ran aground last year and was ultimately withdrawn over concerns from several members of the Democratic caucus.

Democrats have a 50-50 Senate majority, meaning that with Vice President Harris breaking a tie they can confirm nominees without GOP support. But several Democrats — including Joe Manchin (W.Va.), Jon Tester (Mont.) and Angus King (I-Maine), who is a member of the caucus — remained on the fence over Chipman, who faced fierce opposition from gun groups.

Those same senators will be votes to watch as the Senate takes up Dettelbach’s nomination.

An aide said that King is “currently reviewing his professional track record.”

Manchin hasn’t yet weighed in on the nomination, and spokespeople for Sen. Kyrsten Sinema (D-Ariz.), another potential swing vote, didn’t respond to a request for comment.

The White House has been in contact with members of Congress about the selection, an official told The Hill.

Dettelbach is also expected to meet with senators, which is typical for high-profile nominations, as the confirmation process gets rolling. Senators are out of town until April 25.

Supporters are hopeful that Dettelbach will unite Democrats, and potentially pick up GOP support, after he was unanimously confirmed to his U.S. attorney post during the Obama administration.

“Steve Dettelbach served for decades as a prosecutor, working hand-in-hand with ATF agents to take down gangs and convict criminals, and he has the support of law enforcement and former federal prosecutors from both parties — including appointees of both President Trump and President Bush,” said Michael Gwin, a spokesperson for the White House.

“If we want to crack down on gun crime and keep our neighborhoods safe, ATF needs a confirmed Director, and Steve Dettelbach has received praise from across the political spectrum as someone who can roll up his sleeves and get the job done,” Gwin added.

While Senate Democrats have largely supported Biden’s nominees — and just handed him a historic victory in confirming Judge Ketanji Brown Jackson to be the first Black female Supreme Court justice — there have been notable flameouts.

Biden withdrew Neera Tanden’s nomination to lead the Office of Management and Budget after Manchin said he would join with Republicans in opposing her. Sarah Bloom Raskin’s Federal Reserve nomination hit a wall in the Senate Banking Committee and then was sunk for good when Manchin came out against her.

David Weil’s nomination to lead the Labor Department’s wage and hour division went down on the Senate floor earlier this month after Manchin, Sinema and Sen. Mark Kelly (D-Ariz.), who is up for reelection in November, opposed him. Biden then withdrew the nomination.

But the ATF position has been politically tricky for both parties because it’s become a way for senators to shadowbox both with each other and the White House over gun laws, which are always a lightning rod issue in Washington.

The group of Senate Democrats were skeptical about Chipman’s nomination over concerns that he could be resistant to gun rights.

And Trump also withdrew his own nominee for the position, Chuck Canterbury, after he was stuck in limbo for months because of pushback from GOP senators. The Hill reported at the time that several Republican members of the Judiciary Committee were either opposed to or had concerns about Canterbury because they felt that he was vague about his position on firearms during his hearing.

But Dettelbach has strong supporters in the Senate, including Sen. Sherrod Brown (D-Ohio) and members of the Senate Judiciary Committee, including his former boss Sen. Patrick Leahy (D-Vt.). And in a preview of the pitch senators will likely get, the White House is touting his support from law enforcement officials in both parties.

“Steve Dettelbach has spent many years fighting violent crime and illegal guns, and he will continue that important work as Director of ATF,” said Rod Rosenstein, who served as deputy attorney general, and was a frequent target of the former president’s, during the Trump administration.

A Morning Consult/Politico survey released last year found that 84 percent of voters, including 77 percent of Republicans, supported requiring a background check for all gun purchases. Meanwhile, a 2021 Data Progress and Vox poll found that 61 percent favored an assault weapons ban.

But that hasn’t resulted in a similar shift in Congress, where gun legislation has been stuck in the Senate despite Democratic control of both sides of Pennsylvania Avenue.

And gun groups, foreshadowing the criticism that Dettelbach is likely to get from Republicans, are signaling early concerns over a myriad of his positions on firearms and their laws.

The National Rifle Association’s lobbying arm is urging its members to call senators and tell them to oppose Dettelbach’s nomination, arguing that Biden is trying to put a “gun control advocate in charge of the agency responsible for regulating America’s firearms industry.”

And the National Shooting Sports Foundation, a firearms industry trade group, said that it has “significant concerns” about Dettelbach’s support for, amongst other things, a ban on AR-15 semiautomatic rifles and universal background checks.

“NSSF is committed to a thorough examination of Dettelbach’s record and qualifications and will listen carefully to his testimony before the Senate Judiciary Committee,” the group said.

ILA | Oregon Agrees That Delaying Measure 114’s Permit-to-Purchase Requirement Is Necessary After Challenged in NRA-ILA Backed Lawsuit
Gun violence still the same after Sandy Hook school shooting
Number One Responsibility for All 46 Presidents Is Contained in the Oath of Office: Protect the Constitution
Opinion | We can’t cure mental illness, but we can get guns off the streets
Why Mass Shootings Won’t Get Tough Gun Control. : ThyBlackMan.com