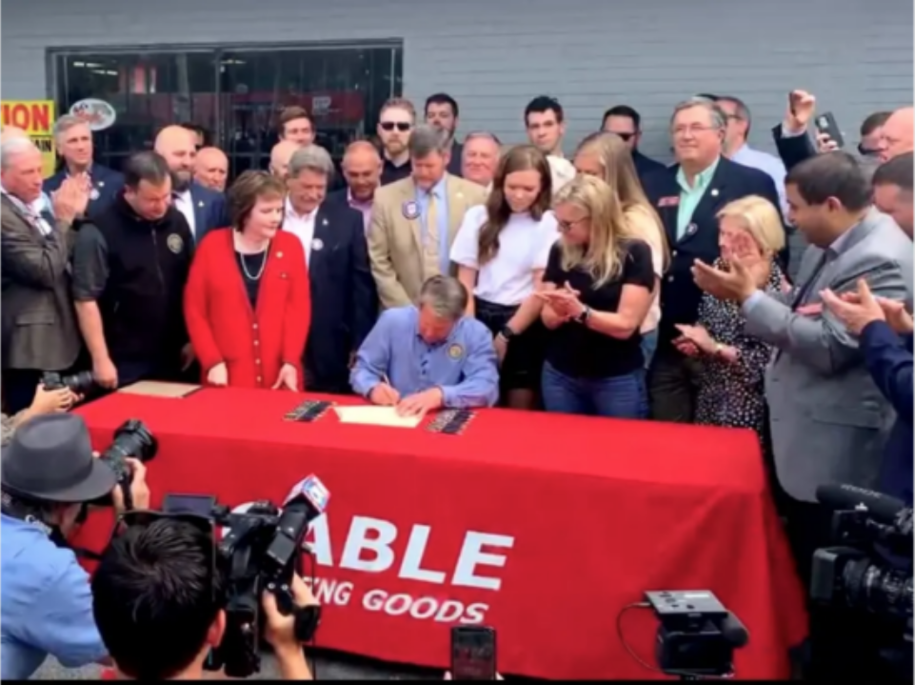 Nearly 40 years ago, the NRA began its crusade to get every state to issue concealed-carry permits to anyone who could legally own a firearm. When they began, nearly no state did so. Now, all but eight states do so. To get a permit, many states have required applicants to have a specific need for carrying—such as dangerous employment—and to undergo background checks and training, including live-fire proficiency tests.

But beginning in 2009, the GOA and subsequently the NRA began a new crusade to eliminate permits altogether. At the time, just Vermont and Alaska were in that category. Now, as the green states in the map below show (with Georgia not yet included), 25 states have such laws on the books, the product of heavy lobbying. It doesn’t always work. Most recently, such a move failed by two votes in Nebraska. Here’s a state roster with some details.

Kemp had vowed to sign such a law during his 2018 campaign, which also featured him in a much-ridiculed TV ad that showed him pointing a shotgun at an actor depicting someone who wanted to date Kemp’s daughter.

In the three years after his election, Kemp did little to push permit-less carry at the Legislature, until former U.S. Sen. David Perdue declared he would challenge the governor for the state’s highest office. Perdue accused Kemp of being a “career politician who hasn’t delivered” for gun rights advocates or backed other cultural issues popular with the party’s conservative core.

While pursuing permit-less carry is considered a play for GOP voters, a poll by The Atlanta Journal-Constitution earlier this year found that about 70% of Georgia voters polled do not believe Georgians should be allowed to carry a concealed weapon without first obtaining a license. Of those, 54% of respondents who identified as Republican and 60% of those who said they were conservative opposed allowing handguns to be carried without a permit.

In an ad last week, state Democrats blasted Kemp for planning to sign the law.

No permit. No background check.

70% of Georgians oppose it and law enforcement has major concerns.

But @BrianKempGA plans to sign a dangerous “criminal carry” bill into law that weakens public safety by making it easier for criminals to carry hidden, loaded guns in public. pic.twitter.com/NYoDn3M1qX

It should be noted that while Georgia and other “constitutional carry” states don’t require background checks, anyone who purchases a firearm from an authorized dealer must still undergo a federal background check. But that doesn’t cover the 20% or so of Americans whom analysts say acquire firearms in private sales or as gifts.

The most powerful opposition to permitless carry laws comes from law enforcement. For instance, when the Ohio legislature was considering its own law, Hamilton County Sheriff Charmaine McGuffey challenged it:

“To allow people to carry concealed with no background check, no documentation of who they are and no training is dangerous,” McGuffey told ABC News. “I am not against the Second Amendment—the right to bear arms. What I’m asking people to do is consider that there must be some failsafe placed into the system.” […]

“I have 900 officers,” she said. “Our deputies are well-vetted for their backgrounds, their personalities, their integrity, their ability to follow rules and follow the law, and I would not hand one of them a gun with no training.”

Numerous organizations advocating tougher gun restrictions also opposed the Georgia bill and those in other states. Among them:

“There’s a reason law enforcement officers overwhelmingly oppose permitless carry: it makes their jobs harder and puts their lives – and the lives of the people they’re sworn to protect – on the line,” said Shannon Watts, founder of Moms Demand Action.

“When states dismantle permitting systems and gut gun safety laws, gun violence goes up. Gun lobby-backed politicians are shamefully putting primary politics over public safety, and the consequences will be even more devastation for their constituents and the law enforcement officers they pretend they support.”

Depending on how broadly the U.S. Supreme Court rules in the case of New York State Rifle & Pistol Association (NYSRPA) v. Bruen, states requiring concealed-carry permits and training may have to relax or eliminate such provisions. That ruling is expected in June.

Meanwhile, President Joe Biden on Monday announced his second nominee to lead the Bureau of Alcohol, Tobacco, Firearms and Explosives, Steve Dittelbach. The agency hasn’t had a permanent director since 2015, and Biden had to pull his original nominee—Dave Chipman—after foes raised a stink that made his confirmation unlikely. Chipman previously was an adviser to the Giffords Law Center to Prevent Gun Violence and was viewed as anti-gun by advocates of looser firearm laws.

Biden announced the ATF will now require licensed gun dealers to keep their sales records until they close the business or give up their federal firearm license and then turn these records over the agency where they will be permanently kept. Previously, gun dealers could destroy their sales records after 20 years. The president also said Monday that it is cracking down on “ghost guns.” A White House Fact Sheet notes:

Today, the President […] will also announce that the U.S. Department of Justice has issued a final rule to rein in the proliferation of “ghost guns” — unserialized, privately-made firearms that law enforcement are increasingly recovering at crime scenes in cities across the country. Last year alone, there were approximately 20,000 suspected ghost guns reported to ATF as having been recovered by law enforcement in criminal investigations—a ten-fold increase from 2016. Because ghost guns lack the serial numbers marked on other firearms, law enforcement has an exceedingly difficult time tracing a ghost gun found at a crime scene back to an individual purchaser.

This final rule bans the business of manufacturing the most accessible ghost guns, such as unserialized “buy build shoot” kits that individuals can buy online or at a store without a background check and can readily assemble into a working firearm in as little as 30 minutes with equipment they have at home.

In addition to the administration’s efforts, six Democratic members of the House of Representatives have introduced  a package of modest bills designed they say to reduce gun violence. At his website, Rep. Joe Neguse of Colorado summarized the legislation:

In March 2021, less than two weeks before a shooter killed 10 people at a shopping center in Boulder, part of Neguse’s 2nd District, the Congressman introduced a universal background check bill. Biden again pushed for its passage on Monday. Across the political spectrum, universal background checks have been the gun-law reform with the widest approval. Yet Neguse’s bill remains stalled in Congress. And previous efforts to pass universal background checks—like the one introduced in 2013 in the wake of the Sandy Hook massacre of 1st grade school children and educators in Newton, Connecticut—have failed under a barrage of NRA lobbying. Despite the organization’s financial and internal troubles over the past couple of years, its agenda is still being carried out.