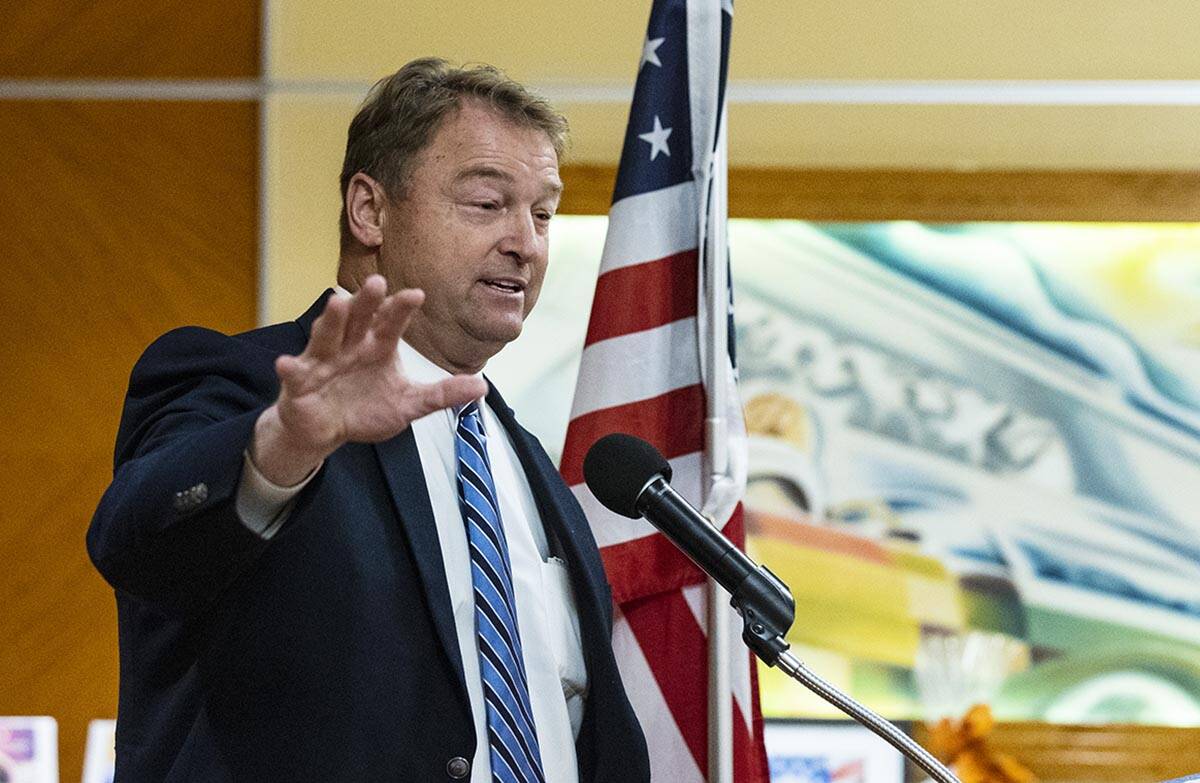 Five Republicans vying for the the party’s gubernatorial nomination took turns railing against Democratic Gov. Steve Sisolak, called for the rolling back of regulations and scaling back state government, and made their pitches for addressing Nevada’s education woes during a candidate forum Wednesday in Las Vegas.

The candidates were each given 20 minutes to answer the same three questions: why they are running, why they think they are the best candidate, and what their first three priorities would be if elected.

Most stuck closely to similar speeches they’ve given at prior events and struck similar tones to one another in their comments about business being overburdened by regulations and on Sisolak’s handling of business closures during the COVID-19 pandemic.

Heller said that he would look to reduce the state’s general fund budget by 20 percent, adding that the “only exception will be public safety.”

Gilbert said he would push for school vouchers with “no strings attached” as a way to make public education better, saying that “unless public schools are forced to compete they have no incentive to improve.”

Lee, the longtime Democrat who switched to Republican last year, highlighted the “A+” grades he has received from the National Rifle Association during his tenures as a mayor and a state senator.

Nohra said that his goal as governor would be to make sure Nevada is the best-run state in the nation, and that he would do that by auditing “every single department” that reports to the governor.

Simon said he is the only candidate “that doesn’t believe in rapid growth development,” and would look to put a five-year moratorium on development as a way of reducing the number of people moving to Nevada.

During his speech, Lee pulled up an empty chair, pointed to it and said, “That’s Joe Lombardo sitting there.”

Heller took several jabs at Lombardo over his absence at the event, rising crime rates in Clark County and repeated a claim that Clark County is a “sanctuary city”

“We have a sheriff here in Clark County that is more afraid of voters than criminals are afraid of him,” Heller said.

The Metropolitan Police Department was criticized after revelations that it continued to cooperate with federal officials on deportations even after ending a formal partnership program that operated in the Clark County Detention Center.

Lombardo’s campaign pushed back on the comments from his fellow Republican candidates in a statement Wednesday afternoon.

“While Dean Heller, John Lee, and Steve Sisolak are spending their time making up lies about Sheriff Lombardo, Joe is doing his job, fighting to keep Nevadans safe in the face of liberal policies enacted by the politicians currently running our state. They are all talk,” Lombardo’s campaign spokeswoman Elizabeth Ray wrote in the statement.

Lombardo is scheduled to speak at another gubernatorial town hall event next Tuesday hosted by the Southern Hills Republican Women along with eight others running for the Republican nomination.

Opinion | We can’t cure mental illness, but we can get guns off the streets
Biden Wants to Ban ‘Semiautomatic Weapons’? Dream On.
Number One Responsibility for All 46 Presidents Is Contained in the Oath of Office: Protect the Constitution
Distracted driving; blood on their hands; fossil fuel protests; old format option
Our authoritarian society: When an American political party needs an armed paramilitary wing to rule