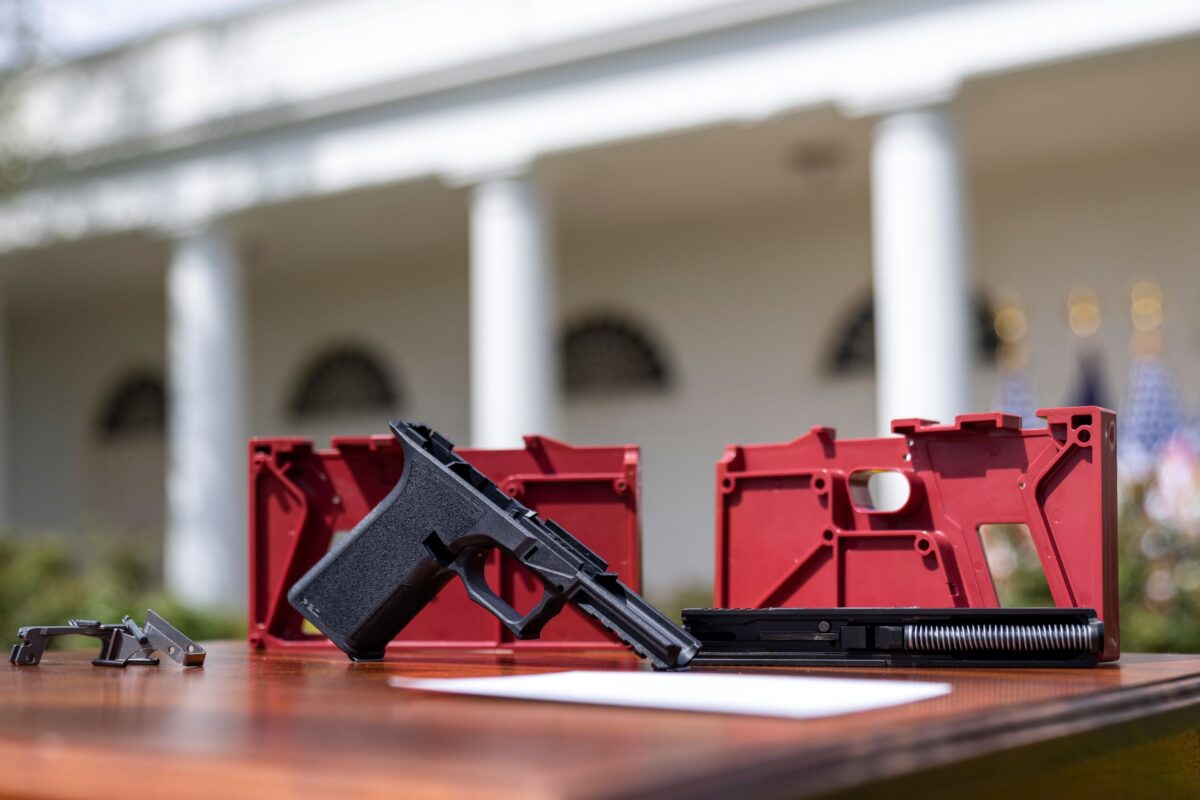 The final ruling, published by the ATF on Apr. 11, essentially expands the definition of a firearm to include partially complete and readily convertible firearm receivers (also called frames).

Once the ruling goes into effect, those receivers will be regulated just like regular firearms, subject to requirements such as serial numbers and background checks.

At a Rose Garden press conference, President Joe Biden said he got the Bureau of Alcohol, Tobacco, Firearms, and Explosives (ATF) to act after he failed to get Congress to act on his gun control agenda.

“They are effectively changing the law without going through the Congress. This is an illegal overreach of authority,” Erich Pratt, senior vice president for Gun Owners of America, told The Epoch Times.

Pratt said his organization was very close to filing a lawsuit to challenge the ruling in court.

At the same time, his organization is working with supportive congressional members to repeal the ruling under the Congressional Review Act. The Act empowers Congress to review and disprove federal regulations within a certain time window.

That effort won’t yield much under a Democrat-controlled Congress, Pratt said. But it will build momentum and help push a defunding rider in the next federal spending bill, he said.

“If Republicans take over one chamber in fall, the rider becomes much likely. If they take over both chambers, it is pretty much a slam dunk,” Pratt said.

A defunding rider can deprive ATF of money to enforce the new ruling.

Matthew Larosiere, director of legal policy at Firearm Policy Coalition, told The Epoch Times, “ATF took just a couple of words from the Gun Control Act, and blew them up to a 364-page ruling.”

ATF told The Epoch Times in a statement that the new ruling on firearm frames or receivers does not change any existing laws or enact any new laws. Rather, it only amends previous rulings to address recent judicial developments and technological advancements for the first time in 50 years.

Larosiere said his organization is weighing different legal options to challenge the ruling, including the option of a lawsuit under the Administrative Procedure Act. The Act governs the process by which federal agencies develop and issue regulations.

He said another problem of the ATF ruling is that it is simply too vague. Many gun parts dealers have a difficult time deciding what is legal and illegal under the new ruling, he said.

“Let’s look at the definition of ‘readily.’ The rule defines it as ‘a process that is fairly or reasonably efficient, quick, and easy, but not necessarily the most efficient, speedy, or easy process,’” he said.

“Well, what do you mean by that? How do dealers know whether they are on the right side of things?”

Jordan Vinroe, owner of Pennsylvania-based JSD Supply, said that in the gun parts business community, one point of view is to stop selling partially complete receivers (commonly known as 80 percent receivers) altogether; another point of view, which he leans toward, is to stop selling 80 percent receivers with other gun parts or instructions that make them readily convertible.

A receiver is the primary structural component of a firearm that houses and connects other components.

Since the new ruling came out, Vinroe has been thinking about the kind of business adjustments he needs to make. One way could be to continue selling 80 percent receivers while spinning off businesses of other gun parts (such as jigs) to a separate entity that he has no holdings in, he said.

“The firearm community is probably one of the most law-abiding groups of enthusiasts there are. We are aware that there is a huge penalty for violating laws, so if a law comes out and says you can never have a home-built firearm again, we are going to comply with that,” he said.

“Then the only people that are going to have those firearms are criminals; they are the bad guys and they don’t follow the law. So the only thing that gun laws do is make criminals safer,” Vinroe added.

Cody Wilson, owner of Texas-based Ghost Gunner, said the ruling might affect the share of “ghost guns” at crime scenes, but it won’t affect the criminals’ demand for illegal firearms. He plans to join some of the lawsuits as a plaintiff to challenge the ruling.

“The key is this expanded construction of what a firearm is. I think it is worth opposing the expansion of the meaning of the word. At some point, they will probably say even 80 percent receivers are firearms,” he said.

“Also, the ruling will affect how many people and how often they make firearms at home, which itself remains a legal activity, so I think it affects some of our rights protected by the Second Amendment.”

The Epoch Times asked the National Rifle Association if any lawsuits are in planning to challenge the ruling. NRA replied that all options are on the table.

On May 21, 2021, at the direction of Attorney General Merrick Garland, ATF published a proposed new regulation on firearm receivers.

During the 90-day open comment period, ATF received more than 290,000 comments, the highest comments submitted to a proposed rule in ATF’s history, according to the Department of Justice.

The final ATF ruling has yet to be published in the Federal Register, after which the ruling will take effect in 120 days.

Both Gun Owners of America and Firearm Policy Coalition plan to file lawsuits before the implementation date.

Cara is a Chicago-based Epoch Times reporter. She can be reached at cara.ding@epochtimes.com.