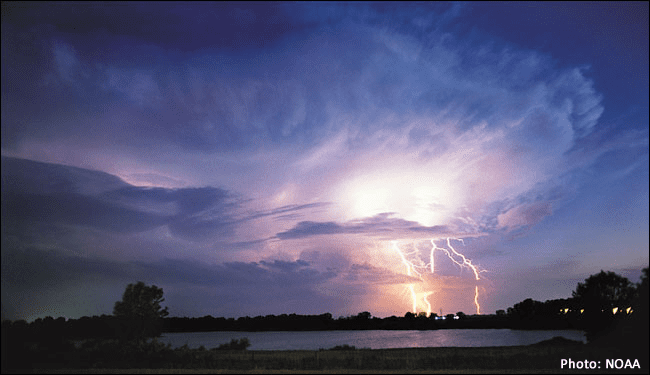 The RI DEM is working with the state library system to offer many locations for one to sign up and not provide their Social Security Number (SSN). Since most towns and cities have libraries that have extended hours, some until 8 pm, they can accommodate those folks that work until 5-6 pm and avoid a burdensome drive to Providence mid-day. It is a smart idea. Though the libraries will not be able to sell licenses directly, the hope is that the library staff will assist the user to purchase the license on line and print it out right then.

When the process is fully operational there will be an announcement from the DEM, and also here at RINEWTODAY.com.

If you see this packet in your mail, I thoroughly encourage you to open it and fill out the questionnaire.

You will be surprised at what is inside.  As a reminder about the severe weather we are seeing, I want to point out a few items.  Remember the tornadoes we saw last November? I feel that is a sign of things to come. Delving into that day a little further, turns out that the National Weather Service has only issued 8 tornado warnings in November since the mid-1980’s. Seven were on that severe weather day, November 13th 2021, and one was the year before. The weather – she be a changin’- Mother Nature is showing her dark side. Most of you carry a cell phone while outdoors. My cell went off November 13th  with the tornado warning and I took shelter under the Route 95 exit 6A underpass. 6 other vehicles joined me to boot. These cell phones come in real handy in giving one up to the minute radar tracks on the Weather Channel app. Green is fine, but Red is stop what you are doing and take shelter. More so pink or purple be prepared to take shelter in the basement. The pink and purple indicate hail has formed in the super cell thunderstorm and the next phase is a tornado will form. With those colors the lightening has become intense, and one should be off the water by then. The best bet is if you hear thunder, or worse, see lightening, head for shore/home. According to various sources people fishing is the top activity for lightning strike deaths.  Live to fish another day.

As this article is being written, this very moment I am watching a small storm cross over Stafford Pond.  There was only one flash of lightning, but it is pouring in buckets with a roar on my roof. Having been a target of lightning 3 different times in life I am overly careful of storms.  Last summer while in Maine, I was tracking a storm while out on my boat and saw the craziest thing: a lightning bolt came out of a cell, went sideways for about 3 miles and then straight down. Yes, lightning can reach out and touch someone even if the storm is 5 miles away. Take heed.

For you gun owners:  A case is in RI Superior Court regarding concealed carry while hunting on state lands.  That is all well and good and as a Strong Supporter of the 2A I fully support the case.  But this question immediately comes to mind: what about those folks who want to CCW but are not hunting? What about the hikers, mountain bikers, kayakers, bird watchers, and people who fish – they should have the ability to carry as well. The case so far only addresses “while hunting”. Since the case is in the preliminary phases I hope someone rewords the court documents to be inclusive.

A number of you will see a hunting questionnaire from the Amanda Center regarding hunting in Rhode Island. I strongly recommend you fill it out. One question that caught my direct attention is “do you feel there is enough state and private land to hunt?” My answer is “no”. Rhode Island is becoming vastly overdeveloped and soon will be known as the City of Rhode Island.  This overcrowding is taxing all aspects of our natural resources as town and city councils are allowing developers to build new homes in existing backyards. If the above mentioned question is alluding to the DEM purchasing more lands for hunting and the like then by all means do so. If not, homes will be built on the lands.

See you next week.

New Delaware law prohibiting gun ownership for most under 21 stands
Gun group sues N.J. attorney general over public nuisance law
The Murders Continue and Our Government Doesn’t Care
Community Voices: The fewer the ARs out there, the fewer who will die | Community Voices
Matt Gaetz Slammed for Constitutional Carry Tweet: ‘People Will Die’