House Ways and Means Chairman Shaw Blackmon, a Republican from Bonaire, said that once the measure is fully implemented, it will save a family of four with an income of $75,000 about $650 a year.

The tax cut even drew votes from a majority of Democrats in the General Assembly, but that doesn’t mean everybody likes it.

“Brian Kemp’s shift to a flat income tax is a boon for the wealthy, and stands consistent with his record of serving the well-off and well-connected while leaving behind working Georgians by opposing Medicaid expansion and cutting funding for public schools,” U.S. Rep. Nikema Williams, chairwoman of the Georgia Democratic Party, said in a statement.

Kemp was determined to make the most of the moment by signing the tax cut into law on Perdue’s turf.

It might seem like a cocky move, but Kemp appears to be in strong position. An Atlanta Journal-Constitution poll this past week showed Kemp way ahead of Perdue, 53% to 27%, with less than a month until the May 24 primary.

Kemp added to the spectacle by bringing along a guest for the trip to Middle Georgia to attend an economic development announcement in Perry: David Perdue’s first cousin, former Gov. Sonny Perdue.

Sonny Perdue, after some maneuvering by Kemp, just became chancellor of the University System of Georgia, which comes with a big desk and an annual salary of $524,000.

The former governor, with the current governor at his side, was asked how he’ll vote in the primary.

“That’s not a question I’m prepared to answer today,” he said.

The State Election Board is seeking evidence from a conservative election organization to back up allegations it has raised about ballot harvesting in the 2020 election in Georgia.

Ballot harvesting involves collecting multiple absentee ballots and turning them in to election officials or drop boxes, which is illegal in Georgia. There are exceptions, however, for family members and caregivers.

True the Vote filed a complaint Nov. 30 alleging that unnamed organizations paid unnamed individuals $10 per absentee ballot delivered to drop boxes in metro Atlanta. The group did not provide details supporting its allegations.

The State Election Board voted in March to issue subpoenas to compel True the Vote to turn over documents, recordings and names allegedly connected to ballot harvesting.

“They need to provide us the names of those people that they say harvested the ballots. We’re going to find out who they are and where they live, were they paid, and how much were they paid,” Secretary of State Brad Raffensperger said during a debate in Ellijay.

GBI Director Vic Reynolds said in September that “an investigation is not justified” because there was no other evidence tying cellphone signals to ballot harvesting.

Investigators in the secretary of state’s office will receive information gathered through the subpoenas. They will then report their findings to the State Election Board, which could levy fines or refer cases to prosecutors, if there are any.

For Fulton County Election Director Richard Barron said his office tried to notify the secretary of state’s office that he suspected there were problems with Georgia’s automatic voter registrations after spotting a big decline in applications. “We couldn’t get any explanation from the state about why it happened. Whatever was going on, they didn’t want to talk about it,” said Barron, who resigned in March. “I can’t believe the secretary of state didn’t notice unless they were paying no attention.” (Photo/Jenn Finch) 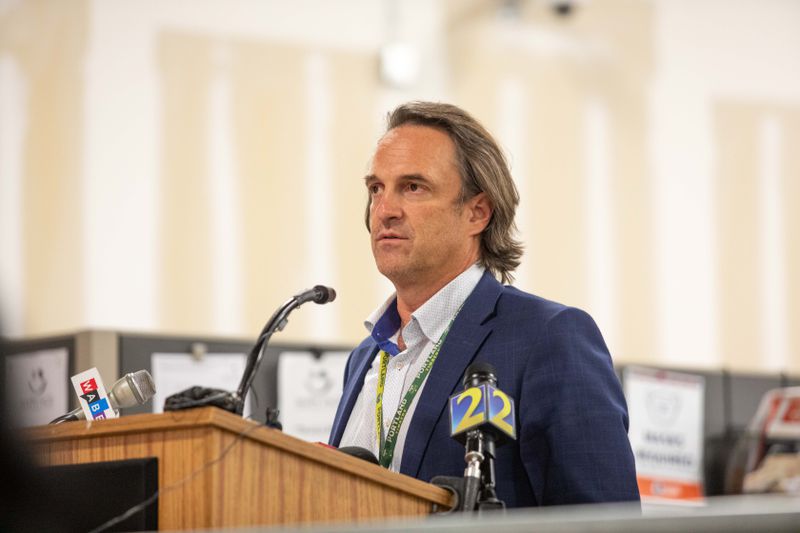 For Fulton County Election Director Richard Barron said his office tried to notify the secretary of state’s office that he suspected there were problems with Georgia’s automatic voter registrations after spotting a big decline in applications. “We couldn’t get any explanation from the state about why it happened. Whatever was going on, they didn’t want to talk about it,” said Barron, who resigned in March. “I can’t believe the secretary of state didn’t notice unless they were paying no attention.” (Photo/Jenn Finch)

It took more than a year before the state fixed a problem with its automatic voter registrations, but the former elections director for Fulton County suspected something was wrong shortly after the trouble began.

Richard Barron — often the target of criticism over Fulton’s difficulties in managing elections, problems that prompted a performance review that could lead to a state takeover of the county’s election board — noticed a problem with the county’s registration applications in February 2021. The county had seen fewer than 6,000 applications that month, a huge drop from the 35,000 that came the same month a year earlier.

The same problem was playing out in county election offices across the state.

The rate of Georgians submitting registration information at the driver’s license offices fell from 79% in 2020 to 39% in 2021, according to records obtained by The Atlanta Journal-Constitution.

Barron suspected that fault lied with the state’s automatic registration program, which was supposed to sign up eligible voters at driver’s licenses offices unless they opted out.

“We couldn’t get any explanation from the state about why it happened. Whatever was going on, they didn’t want to talk about it,” said Barron, who resigned in March. “I can’t believe the secretary of state didn’t notice unless they were paying no attention.”

It turned out the Georgia Department of Driver Services had shut off automatic voter registration when it redesigned its website in January 2021. Instead of registering drivers by default, the new website required drivers to click “Yes” or “No” when asked whether they wanted to sign up.

The discovery wasn’t made until — in response to the AJC’s reporting — pictures of the department’s website surfaced, showing that it had altered its online voter registration form last year.

The problem wasn’t fixed until last month, after Barron contacted the Center for Secure and Modern Elections, a nonprofit organization focused on automatic registration, which then alerted the Department of Driver Services.

The secretary of state’s office refused to answer questions about whether it investigated the decline in registrations or communicated with the Department of Driver Services about the issue.

A spokesman said the secretary of state’s office worked with the Department of Driver Services and confirmed automatic registration is now working correctly, although data is not yet available to determine whether the fix will restore registrations to their previous levels.

Democrat Stacey Abrams shakes hands with Republican Brian Kemp at the beginning of a debate during their 2018 campaign for governor. Kemp, who won that race, recently named one of his frequent donors to serve on the ethics commission while it investigates Abrams’ campaign. Abrams and Kemp could face each other again in November’s general election. (ALYSSA POINTER/ALYSSA.POINTER@AJC.COM) 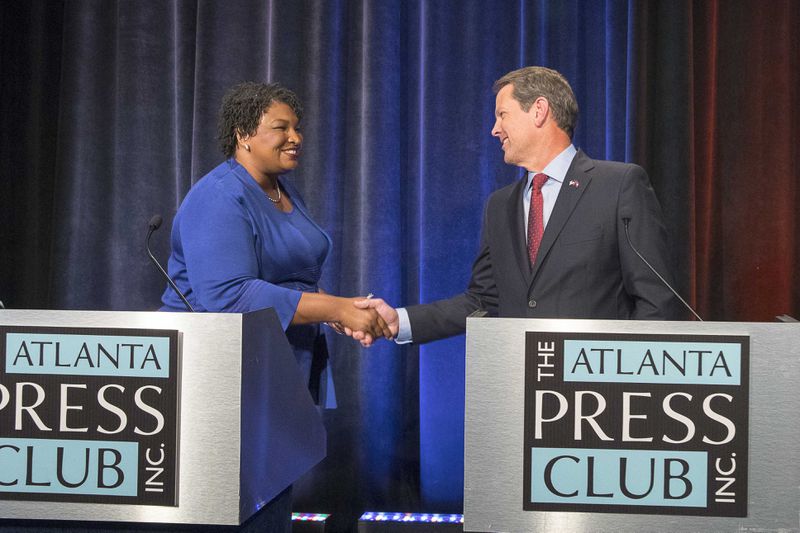 Democrat Stacey Abrams shakes hands with Republican Brian Kemp at the beginning of a debate during their 2018 campaign for governor. Kemp, who won that race, recently named one of his frequent donors to serve on the ethics commission while it investigates Abrams’ campaign. Abrams and Kemp could face each other again in November’s general election. (ALYSSA POINTER/ALYSSA.POINTER@AJC.COM)

Gov. Brian Kemp has appointed one of his frequent campaign donors to the state ethics commission as it continues to investigate the 2018 campaign of Democrat Stacey Abrams, whom he could face in November’s general election.

Kemp picked Atlanta attorney David Burge to replace Eric Barnum, whose term expired. Barnum had the distinction of being the only member of the ethics panel to make campaign contributions to Abrams.

Burge served as a GOP member of the Fulton County Board of Elections and was a delegate to the 2008 Republican National Convention.

An Atlanta Journal-Constitution review of campaign reports shows Burge has contributed to Kemp more than three dozen times, going back to his 2006 bid for agriculture commissioner. Most of the contributions were relatively small.

Burge has also contributed to some Democrats, including state Sens. Elena Parent of Atlanta and Kim Jackson of Stone Mountain; Jason Carter when he ran for governor in 2014; and then-Atlanta Mayor Kasim Reed.

In 2019, the ethics commission began issuing subpoenas seeking bank records and other documents from Abrams’ campaign and affiliated groups as part of an investigation into whether they illegally coordinated their efforts to support her bid for governor.

Abrams’ camp says it has provided thousands of documents to the commission and that the panel was seeking records that either didn’t exist or should have no bearing on its case.

One of the groups, Gente4Abrams (People for Abrams), was fined $50,000 by the state ethics commission in 2020 for failing to report what it spent to help her win the Democratic primary.

The group spent $240,000 for canvassing, social media posts, and print and radio advertising to help Abrams win the primary but didn’t report what it spent or where it got the money to pay for those efforts, the commission said.

It later registered with the state and reported spending about $685,000 more to help the Democrat in her unsuccessful general election campaign against Kemp.

Fair Fight, the voting rights group Abrams founded after she lost the 2018 governor’s race, announced last month that it was endorsing Bentley Hudgins, a Democratic candidate in House District 90.

The group called Hudgins “the clear choice in the election for any Georgian concerned about protecting voting rights.”

That praise seemed highly specific, considering that another candidate in the Democratic primary is Saira Draper, the former head of the voter protection initiative at the Democratic Party of Georgia.

Now some high-profile Democrats are getting behind Draper’s effort to succeed state Rep. Bee Nguyen, who is giving up the House District 90 seat to run for secretary of state.

More can be found online

Here’s a sample of other stories about Georgia government and politics that can be found at www.ajc.com/politics/:

Chuck Haga: Thanksgiving’s over. Now let’s get to work on changing the world – Grand Forks Herald
Letter to the editor: Step up with a solution on guns | Letters to the Editor
Liberals’ mandatory gun buyback is another boondoggle to come
ILA | Hawaii: Honolulu Seeks to Severely Restrict Carry
Gun control debate renewed after two mass shootings in Virginia