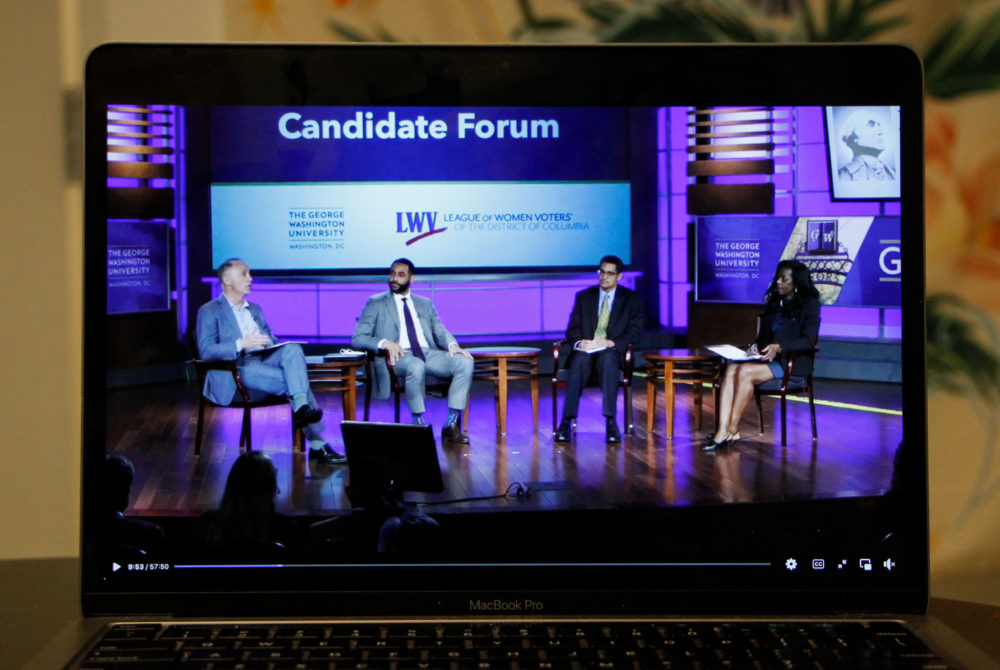 D.C. Attorney General candidates convened at the School of Media and Public Affairs to discuss their platforms and campaigns Tuesday.

The candidates each spoke about how their leadership would have an impact on important D.C. policies, including gun violence and the District’s unhoused population. The forum was hosted by GW in partnership with the League of Women Voters D.C. and GW Law Dean Dayna Bowen Matthew moderated the forum.

Brian Schwalb, a partner of the D.C. branch of the Venable law firm, spoke about the diverse experience needed for the position and how he thinks he is distinguishably prepared for it. He said his experiences like being a former member of the Department of Justice’s Tax Division prepares him for the diverse array of topics he may face as attorney general.

He said while D.C. is a “magnet” for talented people who want to live and work in the city, the talent in the city is not distributed equitably across wards, but that he wants to promote lower income and education gaps across the District as attorney general.

“We don’t share the equity, the income and the opportunity that is abundant in our city fairly across all wards and all neighborhoods,” Schwalb said. “And that is the biggest challenge we have, collectively, all of us who love Washington need to use the law to make sure that those gaps in equity and income are narrow.”

Schwalb said officials need to treat unhoused people living in encampments as humans before evicting them from the encampments, referring to a controversial District policy that led to the closure of major encampments last fall. He said domestic violence issues, poor living conditions and a lack of access to mental health services are some of the key causes of homelessness, and officials must address those to help people.

“So the way we address homelessness as a city has to look again at what the root causes are,” Schwalb said. “To answer the question, given that I don’t favor using bulldozers to move people out of there, we have to deal with that as human beings.”

Ryan Jones, a GW Law alumnus and founder of his own law firm, said he wants to use the attorney general position to improve equity in the law and in society. He said he is running not for himself, but to “give back” to his hometown by using the legal skills he developed over the course of his career to ensure equality for all D.C. residents.

“I want to create equal access to justice,” Jones said. “I know that the courtrooms play an important role in creating equality in our laws and how we guide our lives for a functional society.”

Bruce Spiva, a managing partner at the D.C. branch of the Perkins Coie law firm, spoke about his passion for justice, saying his 30 years of law experience has prepared him to be attorney general.

He said he was inspired by his parents, who grew up in the South under Jim Crow laws, and their belief in “the power of the law” to create change for the better, as in the case of Brown v. Board of Education, a Supreme Court decision in 1954 which desegregated public schools nationwide.

“I’ve been the David against the Goliath,” Spiva said. “And I’m prepared to do it and win.”

Spiva said he believes in the need to address the root causes of gun violence by focusing on greater investment in violence prevention programs, particularly among younger populations, in addition to ensuring fair consequences for people who commit acts of gun violence. Spiva also talked about his support for the Cure the Streets program, a public safety program that seeks to reduce gun violence.

“My preferred solution would be to allow there to be private suits and public suits against gun manufacturers,” Spiva said. “And I would certainly seek to do that if I could, but I recognize that there are some limitations born of the fact that the NRA, unfortunately, has too many congresspeople in their pocket.”

This article appeared in the April 28, 2022 issue of the Hatchet.

Law enforcement officials: Supreme Court gun ruling will make our jobs harder | News
Voters in 7 States Cast Ballots in Midterm Primaries, Runoffs
Americans Have Right To Carry Guns In Public, Rules US Supreme Court, Amid Intense Gun Violence
Why now? How a four senators finally got a gun deal no one thought was possible
Meet the candidates for Illinois Congressional Districts 15-17