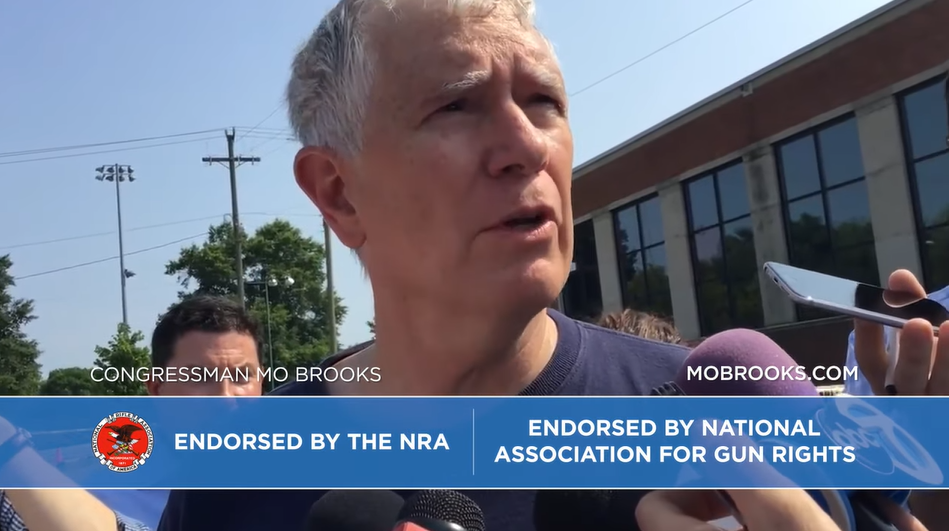 In a press release, the NRA-PVF said Brooks had a proven record of protecting Second Amendment rights.

“On behalf of our five million members across the country,” the group said in a statement, “the National Rifle Association Political Victory Fund (NRA-PVF) endorses your candidacy for the U.S. Senate in the May 24, 2022, Republican primary election in Alabama. Based on your consistent and proven voting record on Second Amendment issues in the U.S. House of Representatives, you have earned an ‘A’ rating from NRA-PVF. An ‘A’ rating is reserved for a solidly pro-gun legislator who has supported NRA positions on key votes and issues.”

The group highlighted some specific examples of how Brooks fought for gun rights in Congress.

“You voted against the so-called ‘universal’ background check system, which would criminalize the private transfer of firearms between law-abiding citizens and is only enforceable through a federal firearms registry,” the statement continued. “Additionally, you voted to uphold constitutional due process protections for gun owners and to prevent federal bureaucrats from enacting indefinite delays of firearm purchases for law-abiding Americans, which would turn a fundamental right into a privilege.”

The NRA-PVF also said it appreciated Brooks continuing to fight back against gun control activists.

Brooks released a statement responding to the endorsement, saying he would continue to fight for the Second Amendment right to bear arms.

“The endorsements of both the National Rifle Association and National Association of Gun Rights confirms I am the only Senate candidate who, come hell or high water, will actually fight to defend the 2nd Amendment Right to Bear Arms,” Brooks said in the statement.

The congressman argued that he was the only true defender of gun rights in the Senate race.

The Senate candidate expressed gratitude for the NRA endorsement.

Wednesday, Brooks’ campaign also released a video advertisement titled “Shall Not Be Infringed” that highlights his NRA endorsement and once again touts his record of supporting the Second Amendment.

The video features Brooks talking to the media following an assassination attempt at a 2017 Republican baseball practice. The congressman was listed at the top of a kill list found in the gunman’s pocket.

Yaffee is a contributing writer to Yellowhammer News and hosts “The Yaffee Program” Weekdays 9-11am on WVNN. You can follow him on Twitter @Yaffee