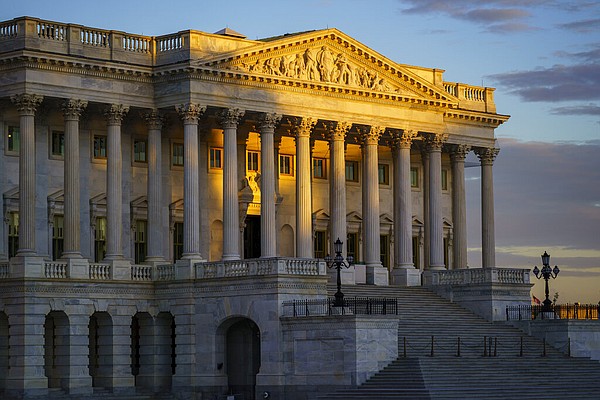 WASHINGTON — Donald Trump’s sway over the Republican Party is on display in this year’s U.S. Senate race as John Boozman leans on the former president’s endorsement.

The 71-year-old senator is the only candidate in the race with Trump’s endorsement. But Boozman’s primary opponents are casting doubt on his conservative credentials, aiming to paint the two-term senator as a career politician who has not been loyal to the former president.

The approval of Trump is a running theme in Boozman’s campaign messaging: The endorsement has been highlighted on social media, plastered near the bottom of fundraising emails and featured in campaign advertisements.

The strategy reflects the staying power of Trump’s political brand in Arkansas and across the nation, despite his 2020 presidential election loss and his impeachment over allegations of inciting insurrection. Fifty-seven senators voted in favor of convicting Trump, 10 short of the number required.

Earlier this year, Trump suggested that he might pardon people who took part in the storming of the U.S. Capitol on Jan. 6, 2021, if he becomes president again, and he praised Russian President Vladimir Putin as “savvy” in the lead-up to the invasion of Ukraine.

Boozman, who days after the riot opposed considering pardons under any circumstance, said Trump’s comments have not made him think about moving away from the former president.

“We would be a heck of a lot better off if we had a President Trump right now versus a President Biden,” he said in an interview Friday.

Arkansans will head to the polls Monday for the start of early voting. The primary election will take place on May 24.

The senator is facing off against Jake Bequette, a veteran and former Arkansas Razorback; Jan Morgan, a gun-range owner; and Heath Loftis, a pastor of a church in Stuttgart.

A candidate must receive 50% of the tally plus one vote to win outright in a primary race. If no one reaches that threshold, then the two candidates with the most votes move on to a runoff election.

A recent poll of 802 likely GOP primary voters found that Boozman came away with 45% of the vote, whereas Bequette came in with 19% and Morgan with 16.5%. The poll from Talk Business & Politics and Hendrix College holds a margin of error of 4.3%. It was conducted on Monday.

THE SENATOR AND TRUMP

Boozman is the senior member of the state’s congressional delegation and has emphasized issues with direct ties to Arkansas, such as agriculture and veterans affairs.

The Rogers Republican serves as the top GOP lawmaker on the Senate Committee on Agriculture, Nutrition and Forestry. He’s also worked across the aisle on the Agriculture Committee in order to advance legislation backed by Arkansas farmers.

And as a leader of the bipartisan Hunger Caucus, he backed efforts to ease food insecurity and increase poor children’s access to meals.

“We can disagree without being disagreeable,” Boozman has repeatedly said.

Boozman’s embrace of the Trump endorsement is not surprising considering the former president handily won Arkansas in the past two presidential elections, said Janine Parry, a professor of political science at the University of Arkansas, Fayetteville. But there are differences in personality between Trump and the soft-speaking Boozman, she said.

“I just can’t think of two Republicans who are more different in their personal style. Their voting records aren’t that different,” she said. “It’s not that Boozman has been much of a centrist politically, but he just tries not to be rude.”

The senator voted in line with Trump’s positions 91.5% of the time, according to a tally from FiveThirtyEight, a data-driven news and analysis website.

Boozman is also a supporter of one of Trump’s signature policies: building a wall along the nation’s southern border. The senator regularly criticizes high consumer prices and pushed back against a coronavirus vaccination requirement that the Biden administration directed at larger companies.

Republican critics of Boozman say he’s not conservative enough, and Bequette has called him a RINO, an acronym meaning Republican In Name Only.

Bequette, who is also a former NFL player for the New England Patriots, said Boozman only sides with Trump when he can benefit.

“He’s pretending to be a Trump supporter. And the more that the people of Arkansas are hearing about his record and learning about me, they know that I’m the America-first candidate in this race,” Bequette said. “And I think that’s why we’re gonna force this runoff and win the runoff.”

Boozman characterized that criticism as “desperate and untrue,” pointing to his voting record of siding closely with Trump.

“The reason that I did support him in this way was we did great things,” Boozman said. “We secured the border. We had the best economy in 50 years. And working together, building the military kept us safe.”

A Boozman campaign advertisement calls the senator a “workhorse” and points to Bequette as a “show pony.” Another labels the challenger as “Fake Jake Bequette.”

But those endorsements have not stopped the attacks against Boozman. Morgan, the gun-range owner, points to Boozman’s decision not to reject 2020 presidential election results.

“He betrayed the people of Arkansas, and he threw our president under the bus,” she said during an interview with Republican operative Roger Stone that was posted on her Facebook page. “People in Arkansas still have not forgotten that.”

Morgan’s campaign did not make her available for an interview.

Last year, Boozman issued a statement saying that Trump bore “some responsibility” for the storming of the U.S. Capitol on Jan. 6, but the senator voted to acquit Trump during the impeachment push.

Loftis, the pastor running for U.S. Senate, said he’s an anti-establishment candidate. The pastor said he is pro-family and supports the Second Amendment. He also described himself as an abortion abolitionist.

“I’m the only candidate that’s trying to highlight the pro-abolitionist movement,” he said.

Boozman has a financial advantage over his competition, according to the campaigns’ latest filings with the Federal Election Commission.

His campaign reported bringing in more than $1.1 million in this year’s first quarter and spending more than $2.1 million during that same period, bringing its cash-on-hand total to more than $2.5 million at the end of March.

Uihlein, of the packaging supply company Uline, funneled $1 million into the group last year, according to available election commission files.