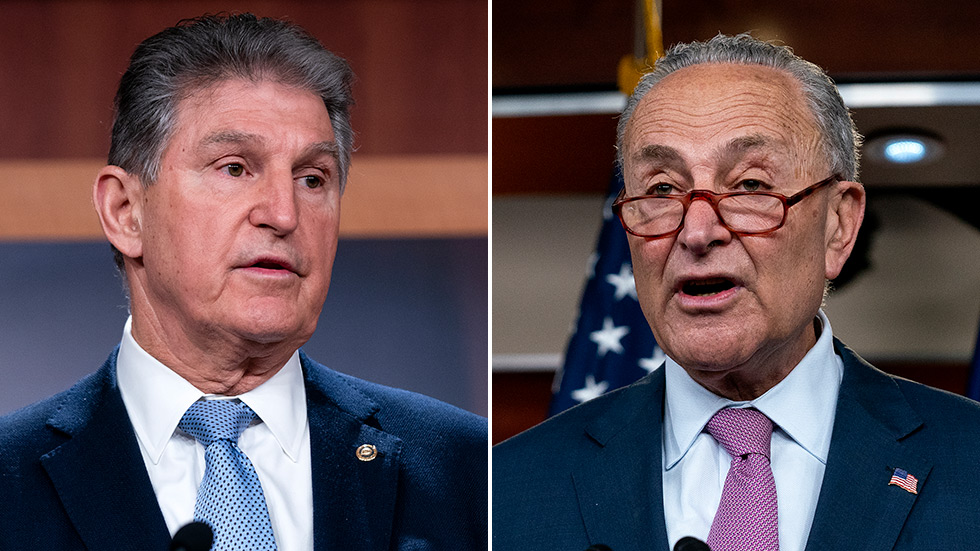 A racially motivated mass shooting in Buffalo is putting new pressure on Democrats to consider gun-control legislation — but once again centrist Sen. Joe Manchin (D-W.Va.) is emerging as a problem.

Manchin says the pared-down Manchin-Toomey proposal to expand background checks, which he helped negotiate in hope of getting support from the National Rifle Association in 2013, is the only reform that has a chance of passing the 50-50 Senate, undercutting Democrats’ hopes of passing broader legislation.

While more ambitious proposals to ban assault weapons and high-capacity magazines never had a chance of getting 60 votes in the Senate, Democrats hoped to at least unify their caucus behind the background checks legislation passed by the House last year.

But Manchin on Tuesday said his old proposal negotiated with the retiring GOP Sen. Pat Toomey (Pa.) that could expand background checks for commercial transactions is the best option.

“I support the Manchin-Toomey, I’ve always done that,” he said. “The Manchin-Toomey is the one. I think if you can’t get that one, then why try to do something just for basically voting for the sake of voting?”

He made his comments shortly before President Biden called for new gun-control legislation during nationally televised remarks after speaking with the families of people who were killed or severely injured at a racially motivated mass shooting in Buffalo.

“There are certain things we can do. We can keep assault weapons of our streets. We’ve done it before. I did it when I passed the crime bill,” Biden said, referring to the 10-year assault weapons ban included in the 1994 Violent Crime Control and Law Enforcement Act.

Manchin’s stance means that Democrats won’t likely get his support for the broader background checks bill passed by the House in March of last year and certainly not for more ambitious proposals to ban assault-style rifles or large-capacity ammo magazines.

Manchin told reporters in March of last year that he thought the House-passed bill went too far.

“What the House passed? Not at all,” he told reporters at the time when asked whether he could support legislation that extended background checks to all sales and transfers of firearms.

On Tuesday, Manchin said he hadn’t paid much attention to what the House did.

Instead, he reiterated his view that the pared-down Manchin-Toomey proposal, which expanded background checks to include gun shows and Internet sales but exempted transfers between friends and family, is the best way to go.

“The best piece of legislation that we’ve ever had, that most people agreed on, was the Manchin-Toomey. We didn’t infringe on anyone’s rights privately,” he said.

He added “the biggest problem” that needs to be dealt with is keeping firearms out of the hands of people who are dangerously mentally ill.

“The biggest problem that we have — we haven’t done enough with mental illness in this country, and that’s something we should all agree on needs to be absolutely stepped up,” he said.

“I’ve never signed on. It needs to be made stronger. But I haven’t even heard that it’s in the works anyway,” said Sen. Richard Blumenthal (D-Conn.), the chairman of Judiciary’s Constitution Subcommittee, who held hearings last year on proposals to reduce gun violence.

“I don’t know what Manchin-Toomey is at this point. It is a shapeshifting, kind of vague proposal without any specifics,” he said.

Sen. Chris Murphy (D-Conn.), another outspoken advocate for expanding background checks, told The Hill last year that he wanted to pass legislation that goes further than the Manchin-Toomey proposal from nine years ago.

He said a better option would be to create a clear carveout for sales and transfers between family members.

Some Democrats, eager to rack up more legislation accomplishments before the midterm election, may be willing to take less than they initially hoped for after taking over the Senate last year.

“At this point we got nothing and it’s a non-stop blockade,” said Sen. Sheldon Whitehouse (R-R.I.) of entrenched Republican opposition to the gun-control measures passed by the House in March of last year.

But there are serious doubts about whether Manchin-Toomey could even get 10 Republican votes to overcome a Senate filibuster.

“I still support the policy. The political path forward is not obvious to me,” Toomey said before the weekly caucus lunch.

Two other key moderates, Sens. Lisa Murkowski (R-Alaska) and Mitt Romney (R-Utah) told The Hill Tuesday that they haven’t given any serious thought to supporting the legislation.

Murkowski, who was in the Senate in 2013, voted against it, along with most of her caucus and several moderate Democrats who have since left Congress, including former Sens. Max Baucus (D-Mont.), Mark Begich (D-Alaska), Heidi Heitkamp (D-N.D.) and Mark Pryor (D-Ark.).

“You’re going back too much in time for me to give you a really thoughtful and informed answer,” she said, when asked if she might change her mind about Manchin-Toomey. “I have not keyed in on what is currently out there in the legislative portfolio of what’s being considered on guns.”

Romney said he told voters during his 2018 Senate campaign that he did not support new gun control measures.

“However, the exception was with regard to more effective background checks. So I would have to look at the specific proposals to make that determination,” he said.

Senate Republican Leader Mitch McConnell (R-Ky.) declined to say whether there would be 10 Republican votes to pass Manchin-Toomey, which he voted against years ago.

“I’d love to be the majority leader. I hope to be after November. But that’s a better question to ask of Sen. Schumer,” he said.