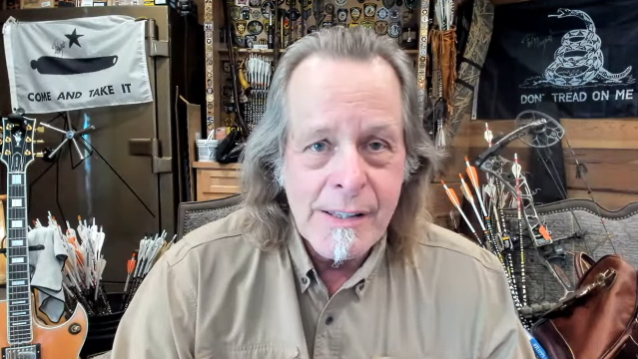 Ted Nugent has denied encouraging violence when he called on supporters of Donald Trump to go “berserk on the skulls of Democrats” during a performance at the former U.S. president’s “American Freedom Tour” stop in Texas over the weekend.

While appearing in Austin on Saturday (May 14),the 73-year-old rocker, who regularly promotes conspiracy theories about everything from the COVID-19 pandemic to the U.S. Capitol riot, told the roughly 8,000 people in attendance, all of whom were required to purchase tickets to hear Trump speak at the Austin Convention Center: “Think of what the enemies of America have done over the last 14 months. They didn’t sneak into the White House — they lied, they cheated, they scammed, and every day the Democrats violate their sacred oath to the Constitution. And if you can’t impress your friends on that, they shouldn’t be your friends.

“So I love you people madly,” Nugent continued, “but I’d love you more if you went forward and just went berserk on the skulls of the Democrats and the Marxists and the Communists.”

In the days following the rally, Nugent was accused of hate speech, especially since his comments came just hours after an alleged white supremacist killed 10 people in a mass shooting at a grocery store. But in a YouTube livestream on Wednesday (May 18),Ted pushed back against the criticism, claiming that he was not inciting violence and was instead encouraging Trump supporters to get out and vote.

Referring to the “enemies of America” who are “welcomed” by the U.S. government which “refuses to secure our borders,” Nugent said (as transcribed by BLABBERMOUTH.NET): “I know it makes you wanna just beat the shit out of these people ’cause they’re so bad. I’m talking about beating the shit out of bad people that are ruining America.” But then he clarified: “I’m not gonna beat the shit out of ’em. We’re gonna beat the shit out of ’em at the voting booth. So everybody, relax with their I need to pound it into their skulls, ‘Nugent pounding skulls.’ No, it’s a colloquialism. Now, my critics don’t know what the word ‘colloquialism’ means, so we’ll just wait for them to go to their Webster’s dictionary and Google it. ‘Pounding it into their skulls’ is a historical colloquialism and evidence to support the truth, logic and common sense into the minds of idiots. You don’t really pound skulls; it’s a figure of speech. How embarrassing that the author of ‘Wango Tango’ has to explain this to the haters. But they already know — they just like to hate. They just live a lie. They’re all liars. All my critics are either liars or just rotten, nasty people.”

Just last month, Nugent, who is an avid Trump supporter, was asked during an appearance on QFM96‘s “Torg & Elliott” radio show if he thinks the billionaire real estate mogul will run again in 2024. He responded: “Yes. And I’ve gotta tell you. So, do we not want secure borders? Secure borders are not good? Stopping the flow of fentanyl is not a good idea? Stopping invaders from Syria and Somalia and jihadists coming across our southern borders, that’s not a good idea? Making the members of NATO and the Paris Accord pay their own way, that’s not a good idea? The lowest unemployment in the history of America, that’s a bad idea?

“I’ve gotta tell ya, anybody that is against Trump is literally against quality of life in the United States Of America. Whether you like the guy or not, that has nothing to do with it.

“He saved your child from the whitewater rapids; quit complaining about his speedo.”

Nugent previously spoke about his admiration for America’s 45th president in an October 2020 interview with InfoWars‘ “The Alex Jones Show”, hosted by noted conspiracy theorist Alex Jones. At the time, he said: “I genuflect at the altar of this great man. He is just pulling off miracle after miracle. He’s really touching the heart and soul and representing the heart and soul of the best American families out there. Just praise God for that. This is one of those divine intervention moments, like the founding fathers. Believe me when I tell you that.

“I’ve been so honored and humbled to spend time with the great man,” Ted continued. “There’s something very spiritual about this crazy guy. I say ‘crazy’ — he’s crazy like you; he’s crazy like me; he’s crazy like this welder I know down the road that, no matter what welding job you have, he shows up early and he welds something that will never break, and then he goes to his next welding job, and he leaves a vapor trail of high energy, of positive spirit.

“The energy from this president… Like the founding fathers defined the history of slavery and tyranny and kings and emperors and despots, that was divine intervention, Alex. And I’ve witnessed this great commander-in-chief Donald J. Trump, and he goes from rally and rally, and he gets up there with piss and vinegar and vim and vigor… You should see the sparkle in this man’s eye.”

Nugent went on to say that Trump‘s appeal lies in his image as the bold, no-B.S. boss who tells it like it is and cuts a fair deal.

“Here’s the bottom line: the most admirable attribute of a human being is believability,” Ted said. “If you believe this man, you believe he believes in what he says and that he represents your beliefs, that identifies President Donald J. Trump. This man just wants to renegotiate global contracts to benefit the United States. He wants the United States to be the winner. He wants to have fair deals, and he wants to have fair trade. He wants to benefit the United States Of America, because this is the last best place. If we turn it over to the freaks like [Nancy] Pelosi and [Joe] Biden and [Kamala] Harris, if we turn it over to them, we are Venezuela overnight.”

Nugent added: “[Trump] sees the threats to the American Dream. He sees the oath violating by elected employees who have turned the corner into criminality, from [Barack] Obama to [Eric] Holder to [Loretta] Lynch to Lois Lerner to Adam Schiff, Hillary Clinton, Bill Clinton — we go right down the list of these gang bangers. I mean, it’s MS-13, Black Lives Matter, Antifa in the Democrat party… [Trump] sees the threats to America and he’s gonna use every maneuver, every trick, every law he can to stop the Marxists. He’s saving his family from the wolves. That’s his motivation.”

A former board member of the National Rifle Association, Nugent has drawn intense criticism for his controversial past remarks, including telling then-president Barack Obama to “suck on my machine gun.” He also made inflammatory remarks about Hillary Clinton, calling her a “devilbitch” who “hates everything good about America.”

In a lengthy Facebook post in 2016, Nugent said Obama and Clinton should be tried for treason and hanged over their handling of the terrorist attack in Benghazi, Libya.

In 2019, Nugent defended Donald Trump after the then-U.S. president was accused of making racist remarks about Democratic congresswomen from black and minority ethnic backgrounds.

How the Senator from Sandy Hook beat the NRA by caving to the GOP
Americans Have Right To Carry Guns In Public, Rules US Supreme Court, Amid Intense Gun Violence
NJ looks to expand list of gun-free places to limit conceal-carry
NRA-ILA | Arizona: Legislature Set to Adjourn
Gun violence research is deeply underdeveloped but growing