Texas Gov. Greg Abbott said that tightening gun laws is not a ‘real solution’ to gun violence because places like New York and Chicago see more shootings than schools in Texas.

‘I know people like to try to oversimplify this,’ Abbott said during a news briefing on the shooting Wednesday after he was asked whether there are any new gun laws he supports. ‘There are ‘real gun laws’ in NY. There are real gun laws in California I hate to say this but there are more people who were shot every weekend in Chicago than in schools in Texas.’

‘What you’re talking about its not a real solution. Our job is to come up with real solutions we can implement.’

Abbott laid blame for the school shooting not on the state’s lax gun laws but on the ‘mental health crisis’ it was facing.

He said he asked a group of Texas sheriffs what the ‘problem’ was, claiming they told him: ‘We have a problem with mental health illness in this community.’

‘We as a state, we as a society, need to do a better job with mental health. Anybody who shoots somebody else has a mental health challenge. Period,’ Abbott said. 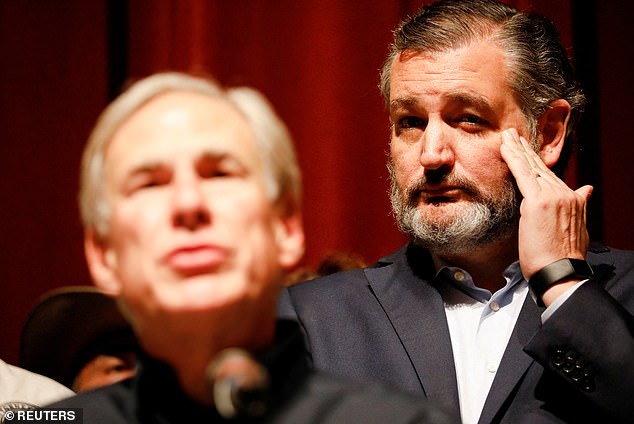 Texas Gov. Greg Abbott said that tightening gun laws is not a ‘real solution’ to gun violence because places like New York and Chicago see more shootings than schools in Texas 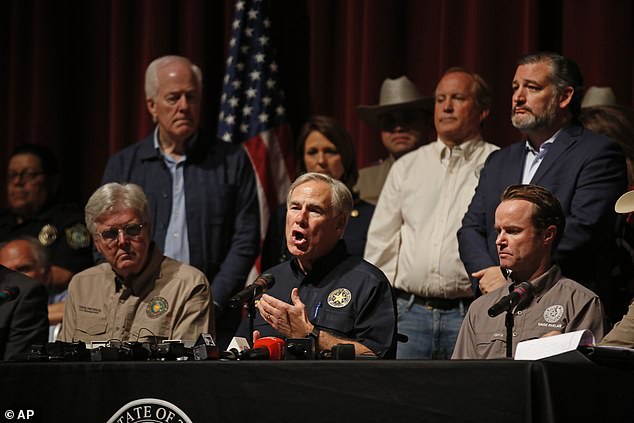 Texas ranks 15th for weakest gun laws of the 50 states, according to the Giffords Law Center. Gun homicide rates in the state have risen 90 percent in the last decade, rising every year since 2011.

Gun crimes have risen in major cities with strict gun laws, too– a rise in shootings in Chicago left more people dead in 2021 than in any other year in a quarter century. Shootings in New York City are also on the rise, numbering 296 for the first quarter of 2022 compared to the first quarter of 2021. Homicides in Los Angeles hit a 15-year-high in 2021, according to police.

Abbott then went on to say it has been legal for 18-year-olds in Texas to buy guns for 60 years, but that school shootings have not been happening for as long.

‘What has changed is mental health.’

Meanwhile, Biden has issued a number of impassioned pleas for gun control legislation.

‘These kinds of mass shootings rarely happen elsewhere in the world. Why are we willing to live with this carnage? Why do we keep letting this happen? Where in God’s name is our backbone to have the courage to deal with it? It’s time to turn this pain into action,’ Biden sounded off on Twitter Tuesday night.

He wrote Wednesday morning: ‘We know common sense gun laws can’t and won’t prevent every tragedy. But we know they work and have a positive impact. When we passed the assault weapons ban.’

He said the ability for a teenage gunman, like Salvador Ramos, to be able to ‘walk into a gun store and buy two assault weapons is just wrong.’ 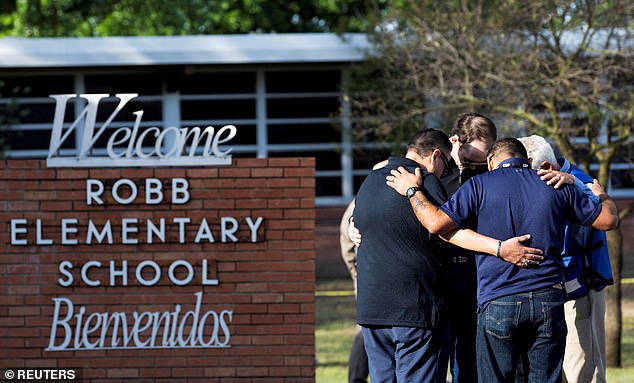 People gather at Robb Elementary School, the scene of the mass shooting in Uvalde, Texas where 19 children were killed 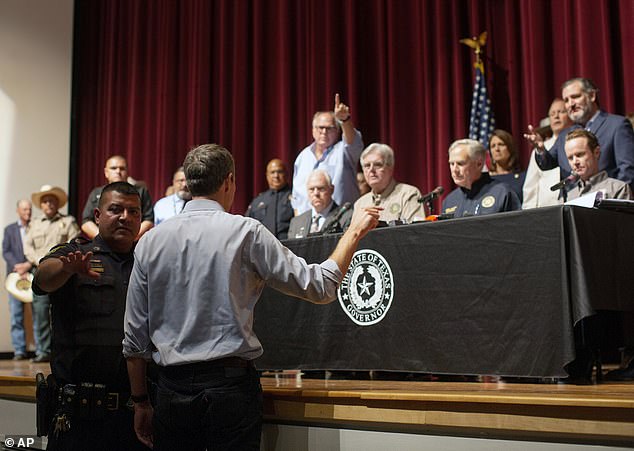 ‘What in God’s name do you need an assault weapon for except to kill someone?’ Biden questioned.

Meanwhile Beto O’Rourke, who is challenging Abbott in the gubernatorial race, knocked Abbott for his loosening of gun policy in the Lonestar State.

‘The moment to stop Uvalde was right after Sandy Hook. After Santa Fe High. After El Paso. Instead,Abbott made it easier to carry guns in public,’ O’Rourke wrote on Twitter.

O’Rourke was escorted out of Abbott’s press briefing by police for causing a disturbance. ‘This is on you!’ he shouted at Abbott.

The Mayor of Uvalde, Don McLaughlin, roared up from his seat, leering over his walker and yelling: ‘He needs to get his a** out of here! Sir you are out of line! Please leave this auditorium!

‘I can’t believe you, you sick son of a b****, you would come to an event like this to make it a political issue!

Abbott is currently leading O’Rourke by an average of 6.7 points in the polls, according to a polling average by RealClearPolitics.

Last summer, Abbott signed a law allowing anyone 21 and older who can legally possess a firearm to carry a gun in public without a permit.

That law was only one of seven gun rights bills, another made Texas a ‘Second Amendment Sanctuary’ from future federal gun legislation, and another made it legal for gun owners to store firearms in their hotel rooms.

These laws do not appear to have been utilized by the Uvalde gunman, Salvador Ramos. But Ramos had legally purchased two firearms just days ago immediately after his 18th birthday. He paraded the AR-style rifles on social media, including in ominous messages sent hours before the killing started.

He also bought more than 300 rounds of ammunition to use in the attack.

In Texas, people who are 18 and older are legally allowed to buy long guns, such as rifles and shotguns. They must be 21 to buy handguns. Before crashing his car and bursting into Robb Elementary and mowing down 19 students, Ramos had shot his grandmother, who is now in critical condition.

During a press conference Wednesday, Abbott turned the focus to mental health, not guns.

He said he asked a group of Texas sheriffs what the ‘problem’ was. He says they told him: ‘We have a problem with mental health illness in this community.’

Rep. Alexandria Ocasio-Cortez questioned why teenagers can buy AR-15s before they can even purchase beer.

The New York Democrat was responding on Twitter to Rep. Lauren Boebert, R-Colo., a staunch gun advocate, who wrote: ‘You cannot legislate away evil.’

‘Why even be in Congress if you don’t believe in doing your job? Just quit and let someone who actually gives a damn do it instead of acting like a useless piece of furniture when babies are shot with AR15s that we let teen boys impulse buy before they can legally have a beer,’ Ocasio-Cortez wrote on Twitter.

Abbott is scheduled to speak at the National Rifle Association’s (NRA) leadership summit this weekend, and O’Rourke has called on him to withdraw.

‘Governor Abbott, if you have any decency, you will immediately withdraw from this weekend’s NRA convention and urge them to hold it anywhere but Texas,’ he tweeted.