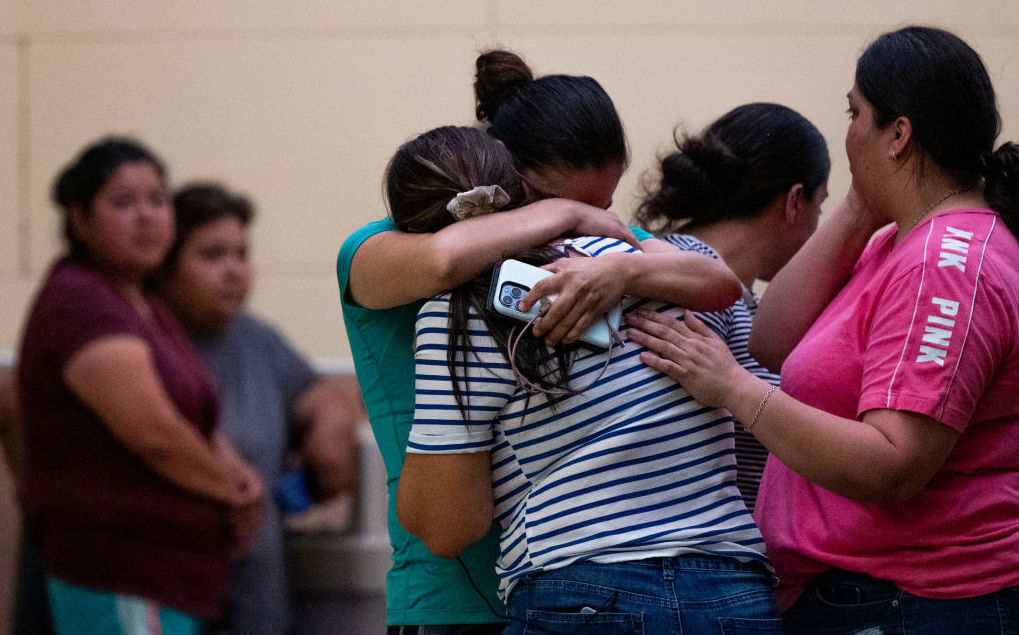 At least 19 children and two adults were murdered by an 18-year-old male using a military-style assault weapon at Robb Elementary in Uvalde, Texas, on Tuesday afternoon. In the wake of the tragedy, feminists, lawmakers and average Americans are collectively grieving the senseless loss of life and grappling with next steps.

President Joe Biden addressed the nation on Tuesday evening, capturing the national mood of horror, frustration and eyes to the future: “For every parent, for every citizen in this country, we have to make it clear to every elected official in this country: It’s time to act. … As a nation, we have to ask: When in God’s name are we going to stand up to the gun lobby? When in God’s name will we do what we all know in our gut needs to be done?”

Reporting continues to paint a clearer picture of the events that unfolded on Tuesday and in the days leading up to the killing spree. The gunman turned 18 just days before the shooting, and bought an AR-style rifle legally on May 17, the day after his birthday; 375 rounds of 5.56-caliber ammunition on May 18; and another assault rifle on May 20. Before heading to Robb Elementary on Tuesday, May 24, he shot his grandmother, critically wounding but not killing her. Coworkers of the gunman told reporters he had an “aggressive streak” and allegedly sent inappropriate messages to female employees.

The 18-year-old then headed to Robb Elementary with the guns in tow and entered a fourth grade classroom. He “barricaded himself inside that classroom, and … just began shooting numerous children and teachers that were in that classroom, having no regard for human life,” according to Lt. Christopher Olivarez of the Texas Department of Public Safety.

Across the nation, grief is palpable.

My daughter’s beautiful teacher was the teacher who was killed in Uvalde, TX. Eva (Ms Mireles) taught Gabby in elementary school. She was a beautiful person & dedicated teacher. She believed in Gabby & went above & beyond to teach her as you can see below. There are no words. pic.twitter.com/qMlVoVEUrY

This thread will be dedicated to the victims of the mass shooting in Uvalde, Texas.

As a parent, my heart is broken seeing these faces and their ages.

My condolences to their families during this difficult time 🙏🏻

Xavier Lopez, 10. He was a 4th grader at Robb Elementary. pic.twitter.com/261cSEBFZ3

19 children and 2 teachers. Nearly a decade after 26 were killed at Sandy Hook.

Nowhere else in the world are families forced to face this kind of loss in the name in “freedom.”

How many more kids will get gunned down before Republicans act?

Enough. We can prevent this.

I shouldn’t feel fear to drop off my kid at school. Yet, here we are. This is America.

I don’t have a lot of words today, except to say that there is a concerted effort right now to convince you that “nothing can be done.” It is designed to make you give in to the exhaustion of this moment. Don’t believe it. It’s a lie. We have power if we mobilize it.

Beyond grief, Americans are raging at a perceived lack of action on meaningful gun control legislation. Hours after news of the shooting broke, Sen. Chris Murphy, a Democrat from Connecticut, who as a member of the House represented the district where Sandy Hook Elementary is located, gave an impassioned speech on the floor of the Senate to his colleagues: “What are we doing? Days after a shooter walked into a grocery store to gun down African American patrons, we have another Sandy Hook on our hands. What are we doing?”

The U.S. is an outlier among its peers in gun violence. Each day in the U.S., over 35 people on average are murdered by a gun; no other wealthy country’s gun homicide rates come close.

The U.S. is also unique from its peer countries in the way it protects gun manufacturers. The 2010 Supreme Court decision in Citizens United v. FEC enabled corpor­a­tions and other groups to spend unlim­ited funds on elec­tions. This permitted the gun lobby to funnel copious amounts of dark money to elected officials on a large scale—and they continue to do so.

Another federal law protects manufacturers from being sued for deaths caused by weapons they design and sell to kill people. Notably, families of nine Sandy Hook school shooting victims took Remington, the maker of the AR-15-style rifle, to court—and this February, they won. The case successfully argued that marketing of the weapon had violated Connecticut consumer law by appealing to lonely, troubled men, who disproportionately commit mass shootings.

The state of Texas is a particularly easy place to access guns, where most types of weapons—including assault rifles—can be purchased and possessed by anyone 18 years or older with very few exceptions. Last summer, Texas Governor Greg Abbott, who boasts an A+ rating from the National Rifle Association (NRA), made gun access even easier when he signed into law the implementation of “constitutional carry” in Texas, which effectively allows anyone in the state to carry a weapon without a permit. Today, the state is ranked the 10th most friendly state for guns and boasts one the nation’s highest rates of gun violence. Abbott says he still plans to attend the NRA’s Institute for Legislative Action annual convention in Houston this weekend.

There is overwhelming bipartisan support for gun reform. In a Politico poll from last year:

A Pew Research poll from 2021 shows high support from Democrats (80 percent) for a ban on assault-style weapons and high-capacity magazines—the weapons used in the Uvalde shooting—while 40 percent of Republicans support these measures.

So when it comes to gun control, what is possible? And what, and who, stands in the way?

Senate: The U.S. House of Representatives, under the leadership of Speaker Nancy Pelosi, has passed gun reform legislation:

But without filibuster reform (which seems unlikely given the current makeup of the Senate), Senate Democrats would need 10 Republicans to consider a bill like this. On Wednesday, Senate Majority Leader Chuck Schumer (D-N.Y.) pledged to renew efforts to pass stricter U.S. gun control laws and implored his Republican colleagues to support the bills and stand up to the NRA. “Please, damn it, put yourself in the shoes of these parents for once,” he said from the Senate floor.

“We are going to vote on gun legislation.”

Supreme Court: The Supreme Court is currently deciding how it will rule in New York State Rifle & Pistol Association v. Bruen, which will weigh the constitutionality of a New York law that allows officials to deny applications for concealed-carry licenses without demonstrating a “special need” for self-defense. The ruling will have a ripple effect in states with similar restrictions, like California.

Working to dismantle the NRA: Lawsuits from groups and elected officials—from Giffords, the gun control advocacy group, to New York Attorney General Letitia James—have attempted to derail and diminish the power of the NRA over the years, with varying success. Additional campaign finance reform laws could also help to keep the NRA’s power in check.

Holding elected officials accountable: In the upcoming midterms, know where your candidates stand on gun reform.

If you found this article helpful, please consider supporting our independent reporting and truth-telling for as little as $5 per month.