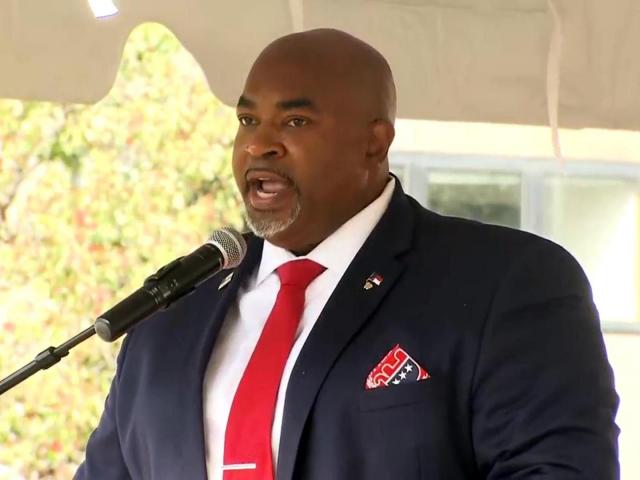 Raleigh, N.C. — North Carolina Lt. Gov. Mark Robinson said Friday that he wept when he heard about the Texas school shooting this week that left 19 students dead, but that he decided to speak at the National Rifle Association’s annual convention—despite criticism—because he wanted to defend the Second Amendment rights of North Carolinians.

“In this nation, you are not the second responder, you are the first responder,” said Robinson, a Republican and NRA board member who has received thousands of dollars in campaign donations from a fund tied to the gun-rights advocacy group. “And you have an absolute duty and a right to stand up and protect your home from any enemy foreign or domestic.

His decision to speak at the event has drawn criticism from political opponents because of the timing and location — in Houston, days after the shooting in Uvalde, Texas, which is some 275 miles away. He was among a lineup of high-profile Republican speakers including former President Donald Trump and Texas Sen. Ted Cruz.

Robinson, who is in his first term, is one of the state’s best known supporters of gun rights. The NRA Political Victory Fund spent more than $82,000 on mailers and other efforts to get Robinson elected in 2020, according to state campaign finance records. The group also donated $5,400 directly to Robinson’s campaign.

The lieutenant governor rose to prominence because of a gun rights speech he gave to the Greensboro City Council in 2018. That speech, following a mass shooting at Stoneman Douglas High School in Parkland, Fla., came as the council considered canceling a gun show at the city’s convention center.

During his 10-minute speech on Friday, Robinson mocked Democrats as communists and Marxists, accusing them of using the Texas school massacre for their own political gain.

Some Democrats have proposed tightening restrictions on assault rifles. Robinson said that their ultimate goal is to take away all guns.

“Well, I’m here to tell you right now—get your pencils out, lick them, and get ready to write this down—It is not going to happen,” he said.

Robinson also blamed “leftist politicians” in Washington for not providing enough funding to secure all schools. “You have defunded the police, derided the police, and you have left our schools as soft targets,” he said.

“You will not tap dance on the graves of these children to disarm the people of this nation,” he said to thunderous applause.

State Democrats this week called on Robinson to cancel his visit to the NRA convention, and on Friday the state party said 760 parents signed a letter to that effect.

“We demand to know—how many children do you need to see gunned down, communities torn apart, and lives upended, before you’ll finally decide to put lives ahead of the gun lobby and actually do something to stop this senseless violence?” the letter said.

“Your thoughts and prayers are not enough,” it said. “Unless proven otherwise, your attendance at the NRA convention in Texas this week makes it clear: you, and the North Carolina Republican Party, are beholden to the NRA instead of protecting North Carolina children.”

Robinson’s office didn’t respond to a request for comment.

Earlier this week, Robinson issued a statement condemning the school shooting, calling it “evil—pure and simple.” And on Friday, like many of the speakers, he said he was praying for the families of the victims.

“When I heard about it, I shed tears. I did,” he said. “I can’t help but think, ‘What if it was one of mine?’ How heartbroken I would be? The pain that would be in my household today. … I paused, took a breath. I said a prayer because that’s what we need right now. That’s what those families need.”

He said that many of the children in the shooting were about the same age as his grandchildren.