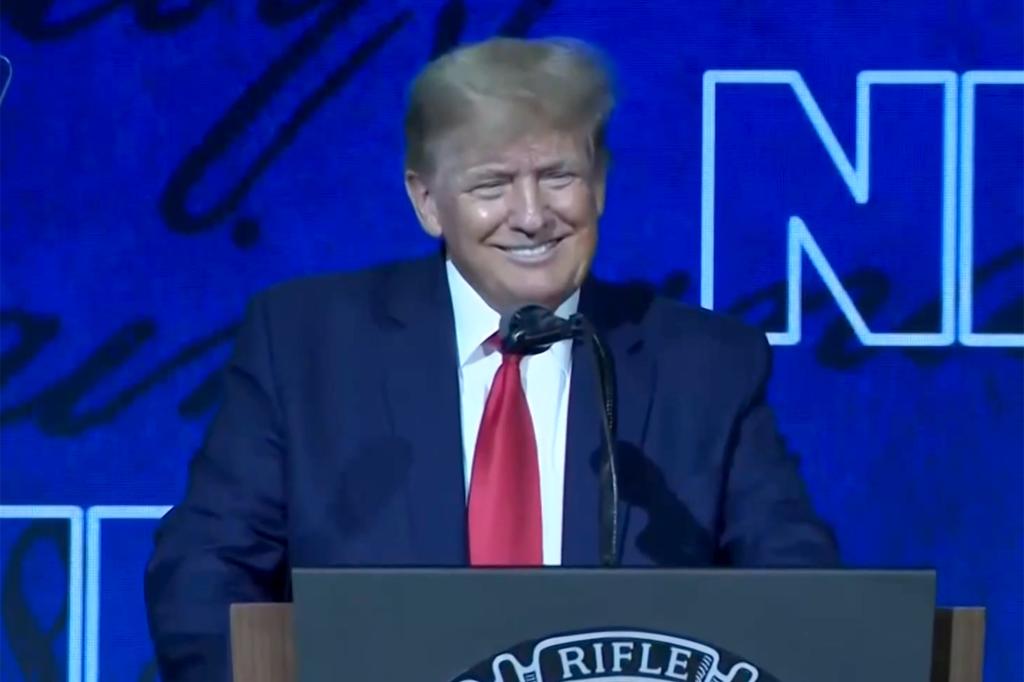 Former President Donald Trump on Friday said that the gunman who murdered 21 people at a Texas elementary school is “damned” to “burn in the fires of hell” as he read aloud each victim’s name to a tolling bell.

“The monster who committed this crime is pure evil,” Trump said. “While those he slaughtered are now with God in heaven, he will be eternally damned to burn in the fires of hell.”

The former president read the names of the 19 children and two teachers slaughtered by Ramos with a legally purchased AR-15-style semiautomatic rifle, with a bell tolling after each name.

“When Joe Biden blamed the gun lobby, he was talking about Americans like you and along with countless other Democrats this week he was shamefully suggesting that Republicans are somehow OK with letting school shootings happen — they’re not OK with it,” Trump said.

“Now is the time to find common ground,” the ex-president said. “Sadly, before the sun had even set on the horrible day of tragedy, we witnessed a now-familiar parade of cynical politicians seeking to exploit the tears of sobbing families to increase their own power and take away our constitutional rights.”

Trump offered an array of policy suggestions to to prevent school shootings, including allowing teachers to concealed-carry firearms and approving funds to bolster school security. He did not endorse any gun control measures — as he did during his presidency.

“What on earth is keeping Democrats from immediately passing measures to ramp up school security?” he said.

The latest from the Texas school shooting

Trump also reprised his “America Focus” emphasis by working in a swipe at the $40 billion that Congress recently approved to help Ukraine fight off Russia’s three-month invasion.

“If the United States has $40 billion to send to Ukraine we should be able to do whatever it takes to keep our children safe,” Trump said. “Before we nation-build the rest of the world, we should be building safe schools for our own children in our own nation.”

Trump also called for an increased focus on mental health programs and slammed “big city mayors” for not doing more to address a violent crime spike across the country — though he did not include New York City Mayor Eric Adams, a Democrat and ex-cop elected on a tough-on-crime plank, among the leaders he blasted.

“If America had a proper approach to policing, prosecuting and jailing, we could cut violent crime in our major cities by much more than half,” Trump said.

“Big-city mayors like Lori Lightfoot in Chicago, Muriel Bowser in Washington and Jim Kenney in Philadelphia watch the slaughter day in and day out and do absolutely nothing.”

Trump, who has teased a potential rematch against Biden in 2024, said if he were to return to the White House, he’d take a more aggressive stance toward combatting violent crime.

“I felt I had a political and moral obligation to allow Democrat mayors and governors to run their cities and states when it came to crime and riots and even horrible violence. In my own mind, I was allowing the Democrats to show how they would handle the situation. And when it got out of control, I got involved… I called the National Guard and federal law enforcement and we saved the cities of Minneapolis, Kenosha, Seattle, Chicago, and even Portland,” he said.

“If I ever do it again, namely run for president and win, I would no longer feel obligated to do it that way. I would crack down on violent crime like never before.”

“The existence of evil is one of the very best reasons to arm, law abiding citizens,” Trump said.

Some speakers at the NRA convention emphasized the facts that Ramos’ parents were no longer in a relationship and that he reportedly had a poor relationship with his mother, who according to some accounts abused drugs.

Cruz and Abbott railed against efforts to curb gun ownership in their remarks to the NRA event.

Abbott suggested that laws aimed at curbing massacres might not work, as “laws didn’t stop the killer.”

“In Uvalde, the gunman committed a felony under Texas law before he even pulled the trigger,” Abbott said. “It’s a felony to possess a firearm on school premises. But that did not stop him. And what he did on campus is capital murder. That’s a crime that would have subjected him to the death penalty in Texas.”

As president, Trump upset gun rights advocates in 2018 by expressing a willingness to enact reforms in response to the murder of 17 people at a Parkland, Fla., high school by 19-year-old Nikolas Cruz, who used a legally purchased AR-15-style rifle.

“I like taking the guns early,” Trump said at the time. “Like, in this crazy man’s case that just took place in Florida. He had a lot of firearms; they saw everything. To go to court would have taken a long time. You could do exactly what you’re saying, but take the guns first, go through due process second.”

Later that year, the Trump administration banned “bump stocks” that hasten the firing rate of semiautomatic rifles in response to that tool’s role in the murder of 60 people at a Las Vegas concert in 2017.

Democrats in Congress rallied to pass new gun laws in response to the Uvalde school schooling and Senate Minority Leader Mitch McConnell (R-Ky.) said Thursday that Republicans would be open to a bipartisan bill that “directly” addresses the issues in the Texas shooting.

Sen. Dianne Feinstein (D-Calif.) mentioned Wednesday at a Senate Judiciary Committee hearing that she sponsors legislation to raise the age limit for AR-15s. She noted that 18- to 21-year-old adults cannot legally buy a beer.

The Uvalde shooting followed the murder of 10 people at a Buffalo grocery store on May 14. The 18-year-old suspect in that crime, Payton Gendron, also used a legally purchased AR-15-style rifle after posting online a white supremacist manifesto.