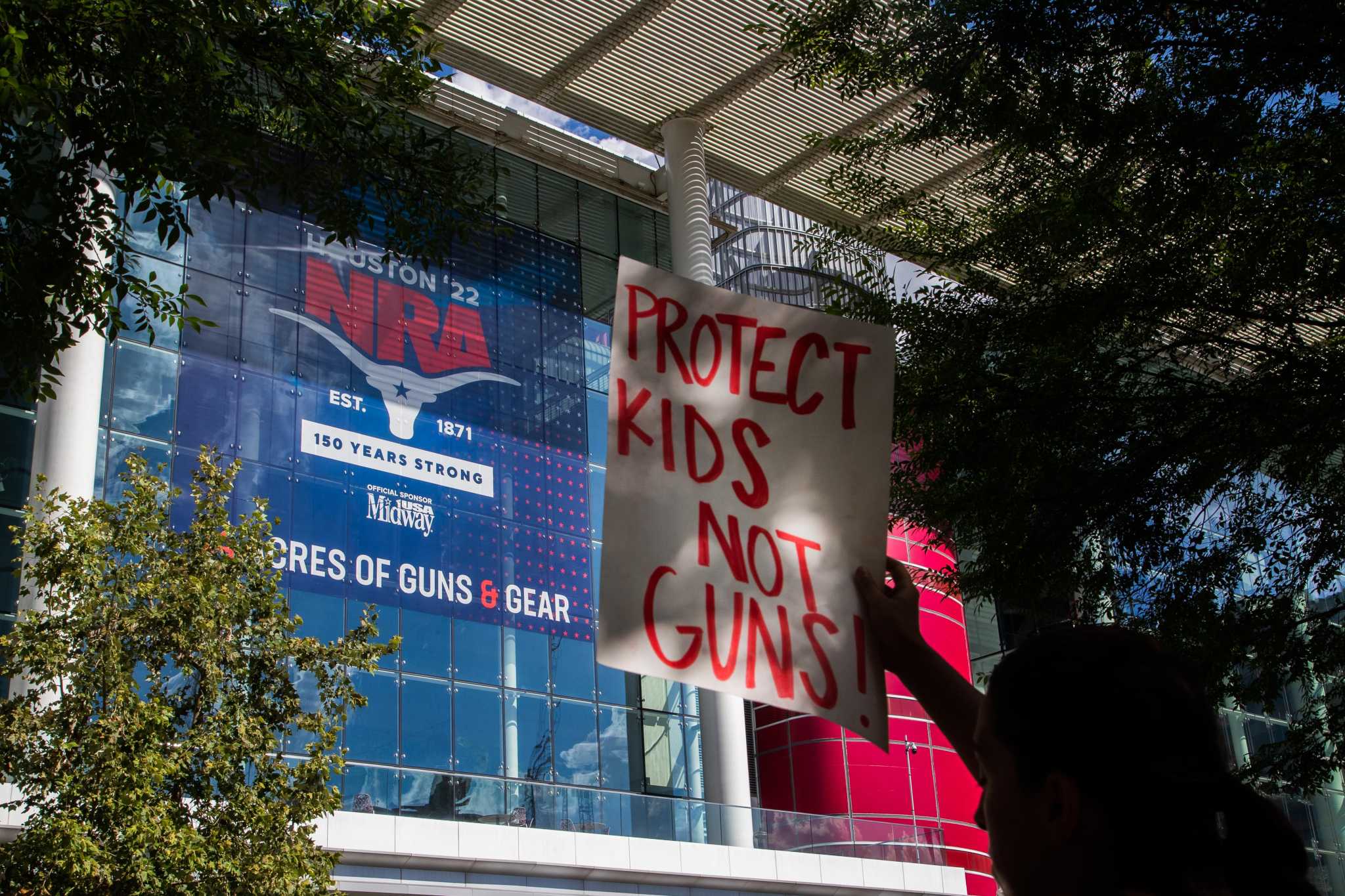 After political fireworks Friday and the crowded, sometimes-hectic Saturday, the final day of the NRA convention in downtown Houston was a tamped-down affair with fewer attendees and a smaller, less-fiery crowd of protesters across the street in Discovery Green.

Down in numbers, however, didn’t mean protesters were any less determined outside the George R. Brown Convention Center

“We’ll be here as long as it takes to change their minds,” joked Sally Curimbaba, who drove in from Katy to protest outside the NRA annual meeting around 7 a.m.

The aim was to get people heading into the NRA’s prayer breakfast, she said, something that angered her because it was billed as a Christian gathering of gun enthusiasts — the Sunday after the deadliest school shooting in Texas history.

Much like most of the crowd, the protesters stayed away until later in the morning. At one point, when Curimbaba and her friend Sumita Ghosh of Sugar Land and Moms Demand Action were the only ones holding signs, there were more dogs — four — than NRA agitators in the park. About a dozen Houston police kept a laid back but noticeable presence on the sidewalk.

As more showed, the diversity of opinion also expanded. As protesters began  to heckle attendees as they arrived, Bryan Lightsey, 51, of Katy stayed a few steps away, holding his sign that was carrying a handful of messages — supporting gun rights, decrying the power of the NRA and calling for sensible change.

“I don’t support taking everybody’s guns away,” Lightsey said. “But there needs to be a waiting period on guns and more of a background check.”

Screening in particular is a problem, Lightsey said. He noted the Uvalde gunman who killed 21 was able, at age 18 and with some red flags in his personal life, to get an assault weapon legally from a licensed vendor.

“There are people who should not own a gun,” Lightsey said. “He’s one of them.”

Brenetta Francis agreed, adding that the teenager who killed her son in February also should have been barred.

“There is no reason at this age firearms should be that accessible,” Francis, 35, said.

Her son, Darius “DJ” Dugas, 11, was killed Feb. 3 when he was struck by a bullet as he went to retrieve a piece of clothing for his mother’s car. Francis, 35, said he was shot by a teenager fleeing the scene of a car break-in.

Daveyonne Howard, 19, was arrested Feb. 18 and charged with Darius’ murder. At the time of the shooting, he was out on bond for aggravated robbery as part of what Harris County Sheriff Ed Gonzalez called an “extensive criminal record.”

Francis, along with a handful of family and supporters, said elected officials and the public need to solve violence problems in the community, whether that is better monitoring and jailing of dangerous people or better restrictions on guns.

Adults arguing over reasonable things is keeping children in fear.

“These kids they love school and are fearing for their lives and it’s not fair,” Francis said.

Attendees of the NRA convention, meanwhile, continued differentiating their support of firearms from violent crime, noting that self protection is necessary because of the risk of illegal guns, burglaries and robberies. Many said they felt it wrong the group was singled out, though it prides itself as being the nation’s largest gun rights group.

For most of those on the exhibition floor, however, most of the convention was a trade show to see the newest firearms gear. Vendors said while crowds might still be down from five or six years ago — something they blamed on COVID concerns and the ecnomic rebound — they said those attending are still spending.

That. inevitably, will draw attention, as NRA balances its agenda with political reactions from the Uvalde shooting. That continues to anger some on the sidelines, including Lightsey, who is married to a elementary school science teacher.

The NRA, Lightsey said, was culpable in that by not allowing “common sense” and working against needed reforms that many lawmakers would pass if the group wasn’t so vehement and politically connected.

“The NRA is too hard line,” he said. “Most people are for common sense, and when they do that, pardon the phrase, they are shooting themselves in the foot.”

Some attendees were willing to meet NRA critics half-way, or even further. Tim Fox, 20, of Evansville, Ind., walked across Avenida de las Americas to speak with the protesters face to face.

“It is really interesting to go talk to them as opposed to shouting at them,” Fox said.

What’s important is they start with a conversation, and build on where there is a agreement, Fox said. He’s not lockstep with the NRA position, and said more rigorous background checks make sense.

“That needs to happen,” he said.

Where he will not budge on the protesters’ side, he said, is the AR-15, the popular rifle that is often used in violent incidents. Fox said the gun should not be banned, because it has valid uses for hunters and those interested in sport shooting.

Despite the difference, Fox said everyone was able to “keep it civil.”

“We need to talk more and yell less at each other,” he said.