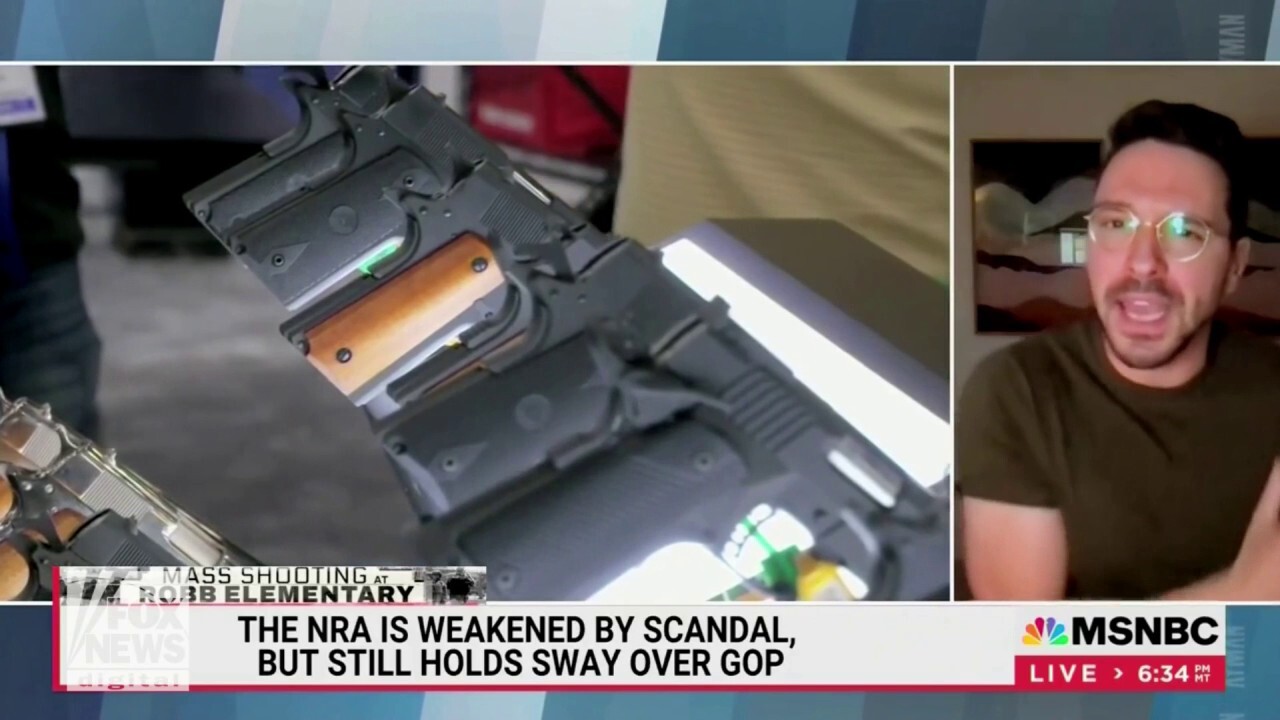 On Sunday, guest host Ayman Mohyeldin spoke with Volsky on the National Rifle Association (NRA) proceeding with its annual convention following the Texas mass shooting that killed 19 students and two teachers. Because it featured prominent speakers such as Texas Sen. Ted Cruz and former President Donald Trump, Mohyeldin questioned whether the NRA had a hold over the Republican Party.

Volsky agreed that gun culture was prominent among Republicans but due to their ideas of “masculinity” and “racism” rather than the NRA alone.

Signage outside the National Rifle Association (NRA) annual convention in Houston, Texas, US, on Friday, May 27, 2022. Houston Mayor Sylvester Turner said the NRA should postpone its convention in the city this weekend out of respect for the victims of the nations second deadliest school shooting this week in Uvalde, Texas. Photographer: Mark Felix/Bloomberg via Getty Images

“Well, it is a force, and it’s a force because gun ownership isn’t just about the NRA, it’s about an entire identity, and it’s intertwined in many ways like a braid with our notions of masculinity, racism, and guns. It’s those three issues that we have seen over decades really strengthen and grow within the conservative movement,” Volsky said.

Volsky then criticized gun manufacturers and owners for marketing guns around the idea of masculinity along with “racist undertones.”

A San Diego police officer carries a Smith and Wesson revolver during a gun buy-back December 21, 2012 in San Diego, California. Hundreds of San Diegans lined up to exchange their unwanted guns for gift cards. REUTERS/Sam Hodgson

“You know, it’s no accident that back when guns were first mass-manufactured, you had some of the earliest manufacturers recognize that in order to sell more guns, they should wrap their firearms in notions of masculinity, right, that having a gun really makes you a man or makes you a real man, and they use that kind of language, those kinds of marketing campaigns, to help push their product, not to mention, of course, all the racist undertones that we have seen in that marketing, that we still see today,” Volsky said.

People walk past signage in the hallways outside of the exhibit halls at the NRA Annual Meeting held at the George R. Brown Convention Center on Thursday, May 26, in Houston, Texas.
(AP/Michael Wyke)

In 2021, the American Civil Liberties Union claimed in a statement similarly that “Racism is foundational to the Second Amendment and its inclusion in the Bill of Rights.”