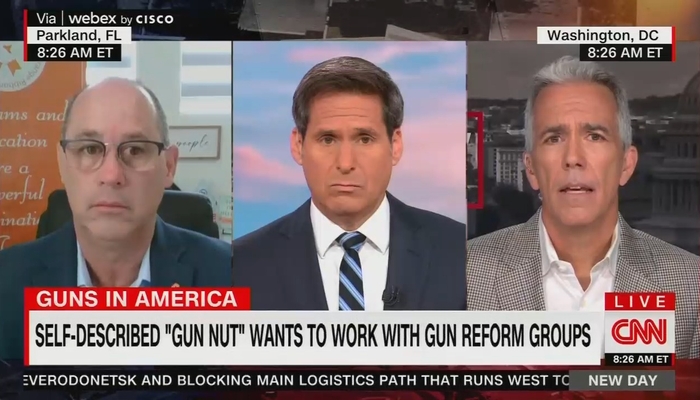 With a few notable exceptions, most of the liberal media’s coverage of the debate around gun control has been an echo chamber of misinformed, underinformed, or just plain uninformed gun control activists, leaving little room for real debate. Perhaps this slant in coverage was why CNN thought they could somehow frame a friendly discussion between washed-up 2020 presidential candidate/liberal Republican Joe Walsh and gun control activist Fred Guttenberg on Tuesday’s New Day as a balanced perspective on both sides of the issue.

John Berman began by saying that, although the question of gun control is a complex and multifaceted one, “A lot of people look at this and say, ‘Hey, if we can just get rational people in a room together, they could figure out some solutions to this.’”

Guttenberg, whose daughter was killed in the 2018 Parkland school shooting, pointed out that the issue that must be approached from a position of reducing violent death, not taking away guns, “because when you start with the premise, how can we reduce gun violence deaths, how can we reduce the instances of gun violence, it is not hard for two dads like Joe and I to talk.”

The first words out of Walsh’s mouth were attempting to display the tattered fragments of his conservative credentials, “John, what’s really important here is Fred Guttenberg and Joe Walsh disagree on more than they agree.”

After arguing that the Uvalde shooter’s purchase of two AR-15s shortly after turning 18 was evidence that reform is needed, Walsh waffled when Berman asked the obvious follow-up question of whether or not he thinks the age to purchase an AR-15 should be raised to 21. Thankfully, his friend Guttenberg stepped in to save him, “you know what, he will be, because I’m not done talking to him.”

Like the good faux Republican he is, Walsh then decided to target the NRA, “Republican Senators are not going to move until responsible gun owners like me put a boot up their ass and, and – and, isolate the NRA,” continuing the nearly universal trend in the liberal media of depicting everyone who opposes gun control as being in the pocket of the National Rifle Association.

While they’re certainly entitled to their opinions, and Berman noted there wasn’t any yelling, what made this interview so ludicrously biased was its framing.

Joe Walsh is a political nonentity everywhere outside a liberal newsroom, and thus doesn’t constitute a majority opinion in the pro-gun bloc at all, so to present him as the “rational” side of the gun control debate frames every voice that doesn’t support raising the age of purchasing an AR-15 or doesn’t hate the NRA with a burning passion as undeserving of a voice at the table. Does the media even want an honest conversation?

This playacting at balanced coverage was made possible by Sleep Number and Subway. Their contact information is linked.

JOHN BERMAN: A bipartisan group of Senators plans to continue talks today in the wake of the Uvalde elementary school massacre. Texas senator John Cornyn says that that group will meet over Zoom to, quote, “see if we can agree on a basic framework going forward.” Joining me now is the father of Parkland victim Jamie Guttenberg and gun safety advocate Fred Guttenburg. Also with me is former Republican Presidential candidate, former Congressman and a self-proclaimed “gun nut,” Joe Walsh.

Gentlemen, I really appreciate you both being with us. And I want to tell our viewers you guys know each other. It’s not like you’re meeting for the first time. You’ve had discussions here.

BERMAN: I also don’t want to pretend that there are easy solutions here. However, a lot of people look at this and say, “Hey, if we can just get rational people in a room together, they could figure out some solutions to this.” So that’s what I want to do here. You guys are in a room together. Figure it out. Fred, you go first.

FRED GUTTENBERG: Yeah, you know, listen, first things first. It starts with me telling somebody like Joe that I respect his rights as a gun owner, and that like him I support the Second Amendment. And it starts with both of us agreeing we hate gun violence. The conversation from there is not that hard. And — all due respect — I just want to say regarding my friend Joe, I give him all the credit in the world. He took the first step towards me last year around Father’s Day when I started an initiative, and amazingly we just started talking about this. Not yelling at each other. Not going off into sides. And we found we agree on a lot of things and I’ll let Joe talk to this, but Joe may even go further than me on some things because I just really desire to start somewhere to get things done.

But he and I both agree, background checks, let’s do it. I can’t speak for Joe, but I think he would probably agree with me, let’s raise the age to 21. He would agree with me we need to do something with extreme risk protection orders, because when you start with the premise, how can we reduce gun violence deaths, how can we reduce the instances of gun violence, it is not hard for two dads like Joe and I to talk.

WALSH: John, what’s really important here is Fred Guttenberg and Joe Walsh disagree on more than they agree. Let’s be clear about that. I’ve been so impressed with Fred and so many others these past few years, out there working their tail off to try to get something done. John, I don’t think anything is going to get done at all until responsible gun owners like me, passionate Second Amendment people like me, get off of our ass and pressure these Senate Republicans to do something. It’s got to come from responsible gun owners like me. I’m sure a few years ago, Fred called me a “crazy gun nut.” I probably deserved —

WALSH: I probably deserved that. I’m a huge gun rights advocate. But, you know what, John, Fred and I got together, we spent an hour together about six months ago, we disagreed on more than we agreed, but we agreed that focusing on up front, before a gun is bought, is where our focus should be. That should be easy stuff. Most gun owners like me want that. Expand and strengthen background checks, red flag laws. John, a week ago, I mean, an 18-year-old in Texas, a week or two after his birthday, bought two long AR-15s and a bunch of ammo. If that doesn’t make us examine what we’re doing, nothing will.

WALSH: I’ll tell you what. I’m not there yet, but I’m listening. That’s something that’s on the table and Fred, doggone it, is making a lot of sense on that issue with me. John, 18 or 21, someone to have a long gun, any firearm, has to undergo some training. I’m sure — I’m open to the age.

BERMAN: Fred, what about that?

GUTTENBERG: No, listen, Joe and I actually had this conversation last week. And he doesn’t — he’s not there yet. But, you know what, he will be, because I’m not done talking to him. The reality is it makes sense. You know, you look at these shootings, you look at the age group of the majority of people who are conducting these shootings, you look at the facts, and the only real argument against it is, “well, but they can go into the military at 18.” Yeah, but the military is a controlled environment with very specific training and requirements around weapons storage and other things. So it is different than our streets. Raising the age to 21, in my book, is a must.

WALSH: Hey, John, Republican Senators are not going to move until responsible gun owners like me put a boot up their ass and, and – and, isolate the NRA. I’m no longer a member of the NRA, haven’t been for a few years, because they don’t even want people like Fred Guttenberg and I speaking. John, the NRA doesn’t want Fred and I to find any common ground. To hell with them! We’ve gotta — the only way to pressure these senate Republicans is responsible gun owners rising up.

BERMAN: Well, I’m glad to be part of this forbidden love then if people don’t want you actually talking here. Assault weapons ban. All right, I’m going to throw those words out, Joe. What do those words mean to you?

GUTTENBERG: Listen, I have a list of things that I want to do, that’s — while that, I would call — on a backup wish list, even though it’s the weapon that was used to kill my daughter, an AR-15, the reality is I would rather see background checks, not just on weapons, but extended to ammunition, raising the age, repeal of PLACA, extreme risk protection orders, things that can pass and have the support of the American people right now to get done, that will save lives. Do I think we as a country need to be okay with AR-15s being sold and companies, like the one that sold the one used in Texas, advertising them to children? No. I don’t. So maybe we can look at how these weapons are sold and where if we don’t come to the place of banning them, but there is so much we can do to save lives that the majority of American people agree with, so let’s go there.

BERMAN: It really does seem like if I take this, you know, concentric circles of you two guys and — you know — the Venn diagram here, there is agreement on discussing raising the age to buy AR-15-style weapons to 21, there is agreement on expanding background checks. Um — So, so, handicap it. What are the chances, Joe, in the next six months, Congress passes that bill?

WALSH: Probably 50/50. And sadly it should be higher. My hope, John, again, is that conversations like the ones Fred and I are having will help compel responsible gun owners again to be part of this.

GUTTENBERG: Joe’s more optimistic than me. And I’ve already watched Cornyn fail multiple times in discussions with my dear friend senator Chris Murphy previously. Um, you need — you need at least ten Republican senators; you’re not getting them, unfortunately. I appreciate the effort. So let’s put it out there for a vote next week, no if, ands, or buts. And you know what, let the two parties show exactly where they stand.

Joe and I, we plan on taking this discussion on the road. We plan on talking to Americans everywhere they are about why this matters, about the connection between this issue and the threat to our democracy, and simply put, if this doesn’t pass now — and, again, I’m not optimistic, for the reasons I laid out — this will be a political solution and it will be honestly, I believe, an ultimate voting issue come the next election.

WALSH: We have to keep the heat on.

BERMAN: Let the record show, I think we just had this discussion and no one yelled. Joe Walsh, Fred Guttenberg, I appreciate it, I really do. Thank you.