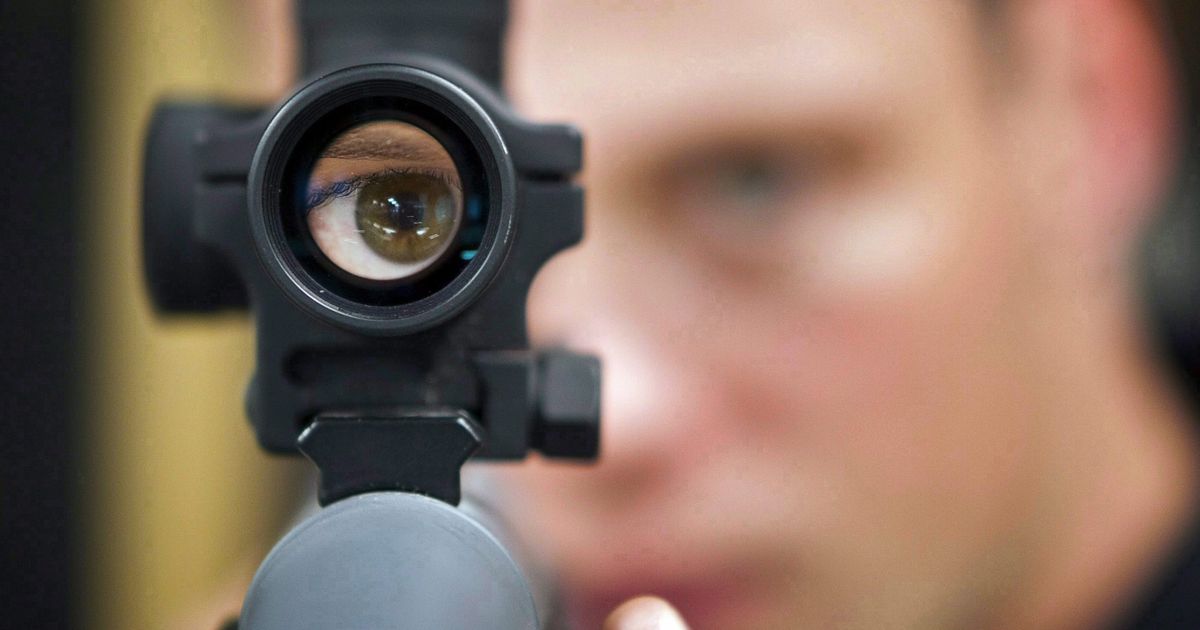 It would be no violation of the Second Amendment to require licenses for firearms.

In this Sept. 15, 2010 file photo, an employee looks through the scope of long gun at a gun store in Calgary, Alberta, Canada.

Outrage, grief and frustration are sweeping our nation in the wake of the recent shooting massacres in Buffalo, New York, and Uvalde, Texas, two of 214 mass shootings in the U.S. in 2022. More than 17,300 people have lost their lives to gun violence this year alone.

Our national anxiety is palpable. Many of our young people live in fear simply because they attend school. Normal activities like grocery shopping or visiting a theater are underlain with apprehension.

Since 1968, more that 1.5 million of our citizens have died from guns — homicides, suicides and accidental deaths. This is more than all the U.S. military deaths in all the wars we’ve fought in our nation’s history. Many hundreds of thousands more have been wounded. Families and communities have been devastated. Many endure unforgettable trauma. Some have life-long debilitating injuries. These are our families, friends, and co-workers — human beings — not dispassionate statistics.

The profusion of gun violence in our country is a form of national insanity which is not found in other developed countries.

As a nation, we cry out desperately for sane leadership and effective solutions. Most Americans want stricter gun laws. More than 90% support rigorous background checks including 72% of NRA members. Yet, whenever Democrats propose legislation to curtail this national menace, it’s blocked by NRA Republican minions in Congress who receive 99% of NRA campaign contributions (Democrats 1%).

Apparently, campaign contributions (bribes) have more value than our lives. In their depraved thinking, our deaths and suffering are merely collateral damage, sacrifices we must make so Republicans can support the NRA’s profit-driven inhumane agenda, cater to Second Amendment extremists and seek to extend their political careers. (Hypocritically, these same politicians claim to be pro-life.)

As people are gunned down, our representatives in Congress defy acting. Utah Sen. Mike Lee, for example, berates Everytown for Gun Safety for soliciting donations in the wake of the Uvalde shooting, claiming Everytown shouldn’t be using emotion to inspire donations. This all-too-common ploy that we should not act when emotions are running high is a calloused excuse to stall and then do nothing — taken right from the NRA handbook.

Wake up, Sen. Lee. The wholesale slaughter of our citizens rightfully incites powerful feelings. Outrage is more than fully justified and the immediacy of taking effective action is long overdue.

While the NRA and its GOP cohorts would have us believe gun violence is intractable because it results from social ills that require long term wide-ranging solutions, the facts prove otherwise. Evidence shows that despite social ills, the most practical means to curtail gun violence is effective gun regulation, which can be enacted while maintaining reasonable Second Amendment rights.

For example, Hawaiians and Canadians enjoy hunting and gun sport activities yet their firearm death rates are about 28% and 16%, respectively, that of the U.S. death rate. Why? Because they have common-sense effective gun regulation.

The NRA’s argument about social ills is bogus.

We have laws to protect public health and safety. Doctors, nurses, electricians, plumbers, motor vehicle drivers and many others must undergo training, pass competency tests and be licensed. Yet virtually anyone, regardless of their mental state, predilection for violence or lack of firearm training can circumvent our weak gun laws and purchase firearms without limitation, including military-style assault weapons. This and many other Second Amendment “freedoms” defy reason. Because public safety is involved, we’re licensed to drive vehicles. Likewise, we should be licensed to own firearms.

Undeniably, our right to life, liberty and the pursuit of happiness far exceeds the NRA’s inhumane, profit-driven agenda and its contorted interpretations of the Second Amendment.

Gun violence impacts all of us regardless of party affiliation. As Americans, to create change, we must act. Our elected leaders must know they will be voted out of office unless they take bold, effective action. Contact your representatives frequently. Let’s create a massive public outcry that finally empowers change.

Andrew Kramer, Ivins, is a Vietnam veteran and retired architect who managed large projects with firms in Boston and Denver.