NPR shared a report last Saturday, May 28, produced by the Center for Investigative Reporting and entitled, ‘Shooting in the Dark: Why Gun Reform Keeps Failing’. The story was told from a certain journalistic perspective.

You can listen to the ‘Reveal’ podcast, here.

The story touched on a couple of aspects of America’s ongoing struggle with gun policy, from the point of view that we don’t fully understand the connection between the widespread ownership of guns and the chilling fact that mass shootings — often, seemingly senseless mass shootings — get covered in the news on a monthly basis.

Early in the program, the show’s host, Al Letson, spoke with Aubra Belke, a former lobbyist for the National Rifle Association, who was one of the many NRA members supporting the idea that requiring background checks and limiting private ownership of military-style weapons might actually be a good thing for America.  That is to say, she supported the idea within the NRA, until she gave up and resigned from the organization.

Al Letson: But as some lawmakers push for stricter laws, the Supreme Court is poised to rule on a challenge to a concealed carry law from New York. Overturning that law could force states to actually loosen restrictions on guns. So at a time when firearm deaths in the U.S. are at an all time high, we’re going to spend this hour looking at gun violence and why so many efforts to pass comprehensive gun control legislation have failed. We start with a story that gives insight into how another mass shooting years ago opened up a path to common ground on new regulations and how that common ground abruptly disappeared. Aubra Belke grew up in a family of hunters and competitive shooters in Butte, Montana.

Aubra Belke: My mother had grown up in a family that had owned guns, many generations back. My grandfather was a third generation member of the NRA. I’m a fifth generation member of the NRA, and I was taught that guns were to be respected… My father took me out to the shooting range and he put a milk jug up on a log and he walked me through all the safety features. And then we spent about an hour shooting it… I think the thing that people who don’t live in places where firearm ownership is common, don’t realize is that for a long time owning a gun wasn’t a political act.

Al Letson: In 2005, Aubra moved to Washington and spent the next few years working on Capitol Hill. Then in 2011, she was offered a job by the NRA as a lobbyist, she jumped on it. But the job that at first felt like a perfect fit became painful and discouraging.

I wrote in a recent Daily Post editorial, concerning public health policy, that “I would propose that ‘news’ is always incomplete. And sometimes misleading…”

News is incomplete because no one can share every detail of an event or controversy. Journalists pick and choose which details to share, and which to leave out.

Since I’m a member of the media, these qualifications also apply to my editorials here in the Daily Post.  On the topic of gun violence, I stand somewhere in the middle of the pack on the issue of gun control — as I assume most Coloradans do.   I’m just another citizen trying to understand a very complex issue.

From that perspective, I was curious about this statement in the ‘Reveal’ story:

Al Letson:  So at a time when firearm deaths in the U.S. are at an all time high, we’re going to spend this hour looking at gun violence…

“All time high?”  This might be a true statement… that firearm deaths in the U.S. are at an all-time high.   But that depends on what you mean.  While 2020 saw the highest total number of gun deaths in the U.S., this statistic doesn’t take into account the nation’s growing population. To find that number, we need to look at the ‘per capita’ rate.

I’ve heard that 2021 showed an increase in gun deaths over 2020 — suicides and homicides both — but I don’t have data to share about it, at this point.

This following graph came from the Pew Research Center article mentioned above.  When CDC publishes “age adjusted” statistics, they calculate the death of a young person as more damaging — in terms of “years of potential life lost” — than the death of an older person.  As we can see, firearm-related suicides have consistently outnumbered homicide deaths… especially during the mid-1980s and during most of the 21st century. 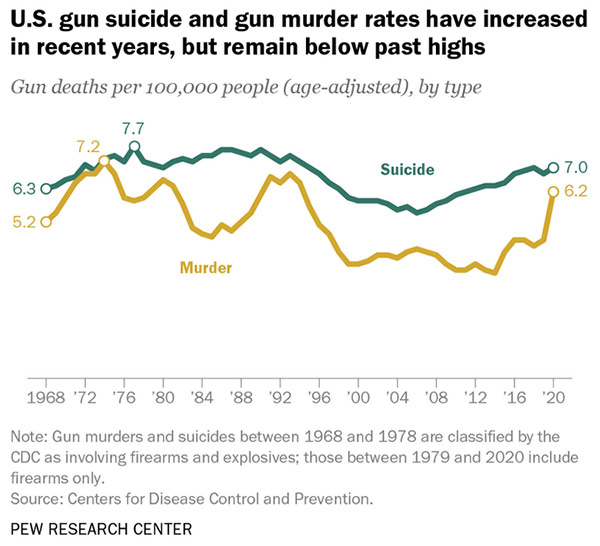 In my experience, based on numerous visits to the Pew Research Center website over the years, the Center appears to be a politically-moderate organization.  Neither right-wing nor left-wing.

We can compare the Pew graph, above, to the following graph posted in 2016 by The New York Times, to illustrate an article by Gregor Aisch and Josh Keller. The graph is based on federal background checks researched and estimated by the Times. 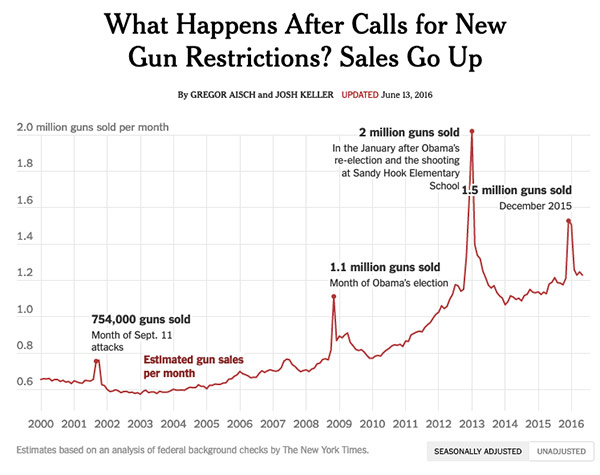 According to the Pew Research Center, during that same period of time, 2000-2016, the U.S. did not see a comparable increase in the per capita rate of suicides or homicides.

One might be tempted to say that, here in America, there is no correlation between the number of guns sold monthly, and the rate of gun deaths.

Bill Hudson began sharing his opinions in the Pagosa Daily Post in 2004 and can’t seem to break the habit. He claims that, in Pagosa Springs, opinions are like pickup trucks: everybody has one.

New York lawmakers to loosen gun laws after Supreme Court ruling
Gun-makers face new legal threat from families of mass shooting victims | Nation/World
‘There’s Just No Way!’: Sunny Hostin Claims It’s Not Possible To Be Pro-Life And Pro-Gun
American gun culture is based on frontier mythology — but ignores how common gun restrictions were in the Old West
Amid New Developments in America’s Gun Debate, Get the Backstory