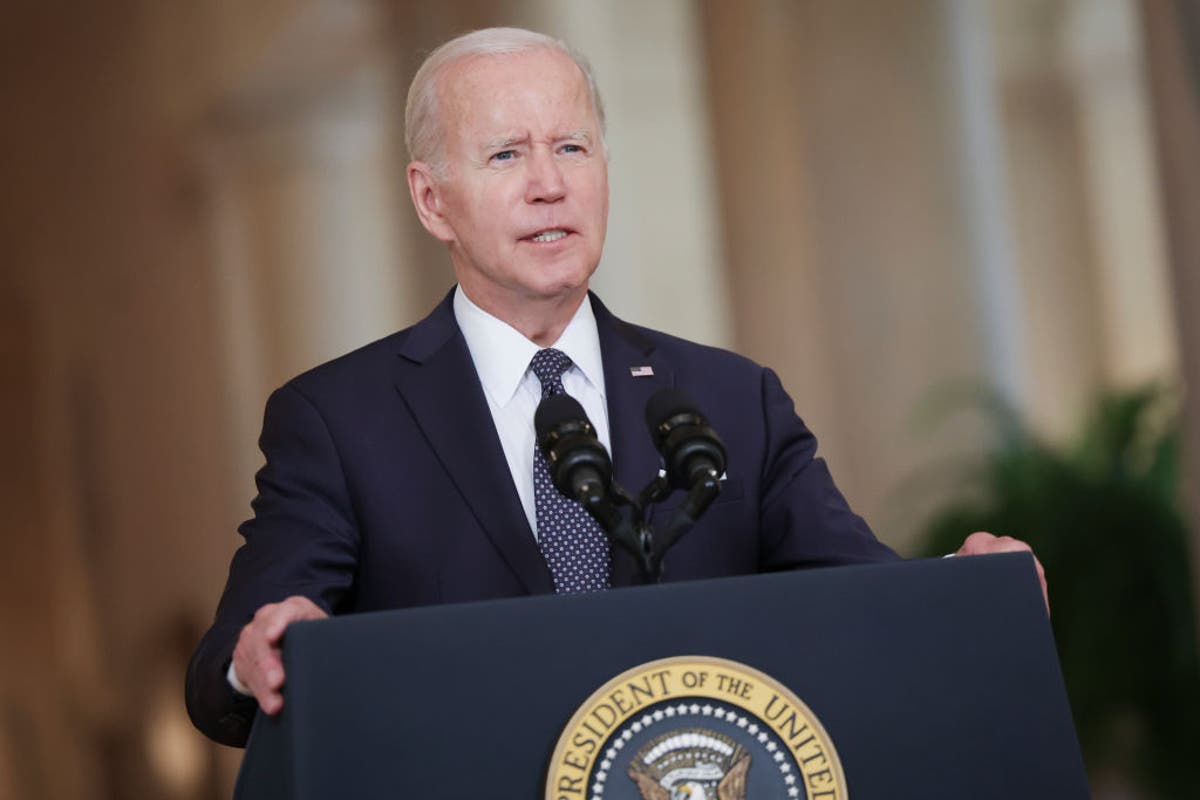 President Joe Biden delivered a plea for action on gun violence on Thursday as the US reels from a spate of mass shootings, including horrific massacres in New York and Texas.

The president delivered a rare prime time address as members of the Senate, away from Washington on recess, huddle to discuss possible compromise legislation in response to the shocking scenes of slaughter which unfolded at a supermarket, an elementary school and a hospital over the past few weeks.

Even those shootings, nightmarish as they are, risk falling into memory now in the face of violence that has unfolded in the days following those attacks in Uvalde and Buffalo, including shootings at a hospital in Tulsa and a high school in Los Angeles.

While telling Americans that he respected “responsible” gun owners and would not seek to confiscate their weapons, Mr Biden asserted that the 2nd Amendment is “not absolute” nor ulimited and that gun violence is out of control in America, requiring immediate action.

He specifically called for the age for firearm purchases to be raised from 18 to 21, and for America to reinstate the ban on assault-style weapons like the AR-15. The ban expired in 2004.

A wide range of responses are being supported by various political factions in response to the recent shootings including restrictions on the ownership of the AR-15, which is designed as a semiautomatic version of the military-grade M16. The rifle was used in the most recent attacks in Uvalde, Tulsa and Buffalo.

”There are too many other schools, too many other everyday places that have become killing fields, battlefields here in America,” Mr Biden declared on Thursday from the White House.

“Over the last two decades, more school age children have died from guns than on-duty police officers and active duty military — combined,” said the president. “For God’s sake, how much more carnage are we willing to accept?”

The remarks were a stern condemnation of the sick trend of gun-related crimes and mass violence that has almost seemed to define American society and schools over the past few decades, and signaled a rhetorical shift from the president who was only days ago complimenting Republicans like Mitch McConnell as rational legislating partners.

”After Republicans let the law expire in 2004 — and those weapons were allowed to be sold again — mass shootings tripled,” Mr Biden’s Twitter account noted during the speech, driving home that new tone which signals that the president is ready to fight about this issue in an election year. Resistance from Republicans on that issue, he noted during his spoken remarks, was “unconcsionable”.

He added that survivors and their families were united in one message: It is time for the government to act to stop the violence.

“Nothing has been done. This time, that can’t be true. This time, we must actually do something,” he insisted, listing off other mass shootings including the Marjory Stoneman Douglas High School shooting and the Sandy Hook massacre, after which he noted there was no federal action in response.

Many in Mr Biden’s party are asking Americans in general to reflect on the staggering number of guns in the US as well; there are estimated to be more than 19 million AR-15s alone in the hands of private American gun owners, and the high-powered rifle makes up only a fraction of the overall US gun market.

His speech on Thursday was seen by some analysts as a response to criticism from his own party that he has been too lenient on Republicans for keeping up a campaign of unified resistance to any sort of gun reforms in the face of mass death.

The president’s rhetoric was celebrated by gun violence activists after his address concluded, while they made clear that they needed to be backed up with a plan for action.

“President Biden was right to point out that we know which policies can help build safer communities for us all – from an assault weapons ban, to expanding background checks, to ending immunity for gun makers,” Guns Down America founder Igor Volsky said in a statement.

“But what the President didn’t do tonight was articulate a clear plan for building support and eventually passing some of these measures. He’s not a candidate laying out an aspirational vision,” Mr Volsky went on. “He’s a President who has a responsibility to do the very hard work to fight for these proposals. Tonight’s speech was a step in the right direction. Now he must roll up his sleeves and use all the tools at his disposal to get the job done.”

It’s unclear what affect his words will have on the bipartisan group of lawmakers meeting to discuss possible compromises on the issue, which looks to currently be centered around a plan to provide federal grant money to encourage states to put into place red flag laws allowing family members or law enforcement to seek temporary weapon restrictions on persons judged to be a danger to themselves or others.

The newfound wilingness of Republicans in the Senate to work with Democrats on the issue just months before the midterms suggests, however, that the GOP has political reasons to pursue the first real federal response to mass shootings in recent memory.

While many on the left hammer the right for supposedly being beholden to the gun lobby, a charge which in many cases has been accurate, the dynamic may be shifting at least somewhat as evidenced by the withdrawal of Texas Lt Gov Dan Patrick and other conservatives from the National Rifle Association’s convention in Houston over the weekend in the days immediately following the Uvalde, Texas massacre.

One of those Republican senators involved in the bipartisan talks told the Portland Press-Herald that she believed the Uvalde shooting in particular had spurred some of her more stubborn colleagues on the right into action.

“I realize that I tend to be optimistic when I work in these groups, but this horrific shooting of these little kids following the shooting of shoppers in Buffalo has really touched people, including my Senate colleagues, and I hope that will allow us to come together and make a difference, Maine’s Susan Collins told the newspaper this week.

“We must act,” the centrist Republican senator declared in her interview. “I’m not saying we can solve every problem and prevent every mentally ill person from resorting to violence, but boy if we could help make it less likely by separating a mentally ill person from weapons – if it is shown they are a threat to themselves or others – that would certainly be an advance.”