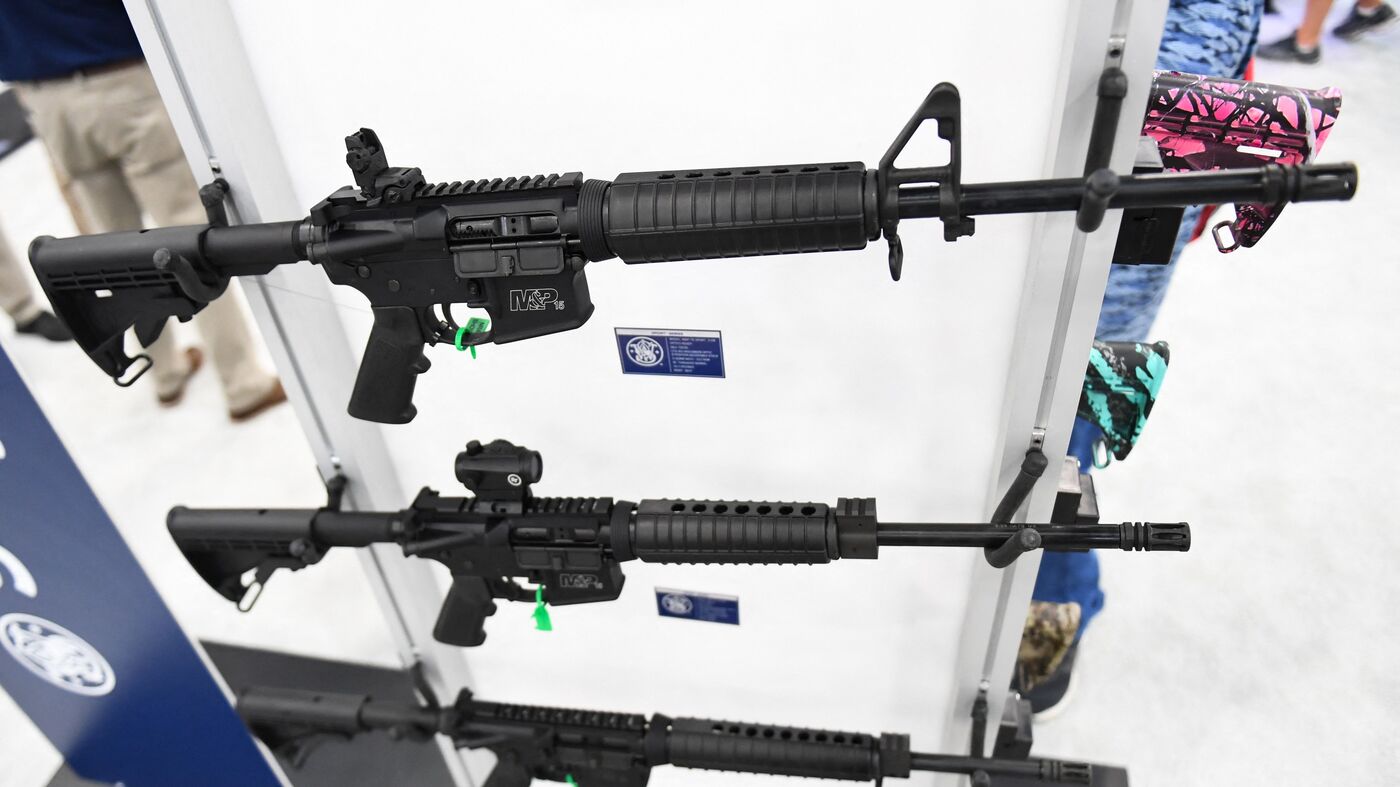 Smith & Wesson M&P15 semi-automatic rifles of the AR-15 style are displayed during the National Rifle Association (NRA) annual meeting at the George R. Brown Convention Center in Houston, Texas on May 28.

Smith & Wesson M&P15 semi-automatic rifles of the AR-15 style are displayed during the National Rifle Association (NRA) annual meeting at the George R. Brown Convention Center in Houston, Texas on May 28.

The people who hoped to win the top prize of an AR-15 rifle in a fundraising raffle held by the Rocky Run Fire Co. in the Philadelphia suburb of Media may be disappointed.

In deference to the mass shootings in Uvalde, Texas, and Buffalo, N.Y., where the gunmen wielded AR-15-style rifles, the volunteer fire station — which was also raffling a 9 mm pistol and a shotgun — decided to award the winners the cash value of the prizes instead of the actual weapons.

It was all about optics, says Assistant Fire Chief Mike Johnson. “The timing on this was bad.”

Gun raffles have become a popular way to raise money for different causes. But lately, some organizers are rethinking their events, if only for the time being.

In the wake of the recent deadly shootings, the Lake Villa Township Republican Club outside Chicago postponed its annual fundraiser, where it planned to raffle an AR-15-type rifle alongside several other firearms.

Dick Barr, vice chair of the organization, says the decision was made “out of respect for the families of the victims in Texas.”

He says going ahead with the raffle would have proven a distraction, given recent events. “The conversation belongs in looking forward to how do we prevent these things from happening,” Barr says, such as focusing on physical security and mental health.

Still, he defends the practice of gun giveaways because, he says, if structured properly, they adhere scrupulously to state and federal guidelines. “We maintain raffles are literally the safest way to acquire a firearm,” he says, because winners have to have identification, submit to a background check and all guns are acquired through a licensed firearms dealer.

In the Pittsburgh suburb of Aliquippa, a similar sold-out gun giveaway featuring a Glock 9 mm pistol and 250 rounds of ammunition was canceled by the local K9 police unit.

“Due to some bad publicity, and negative feedback from other citizens I am going to seize the current sportsman package raffle. Everyone will be refunded for their purchases,” a post on the Aliquippa Police K9 Facebook page announced last Thursday, two days after the shooting at the primary school in Uvalde that killed 19 children and two teachers. Later that day came a follow-up post noting “the hate mail that’s flowing in right now because of a overly sensitive society.”

As in Rocky Run, Aliquippa Police Chief John Lane concedes it was “bad timing” for the fundraiser. The proceeds were to go to the widow of Lane’s predecessor, who died in 2020.

He says that in the past, a sergeant with the K9 unit has raffled other things besides guns. “He’s done cigars; he’s done lawn furniture. But [the gun raffle] makes the most money.”

Lane says that despite the decision to call the raffle off, the community reaction to it in the days after the Uvalde shootings was running about 70-30 in favor of holding it anyway. “I understand why some people find it wrong,” he says. “But it goes both ways.”

The National Rifle Association, which went ahead with a Houston gathering just days after the Uvalde school shooting, has continued to promote its ongoing “Banned Guns Giveaway” raffle, which ends in September, despite the recent shootings. The contest is being billed as a giveaway of “12 world-class guns that Joe Biden, Kamala Harris, Chuck Schumer, and Nancy Pelosi want to ban!”

The NRA did not respond to multiple requests for comment about the raffle.

The U.S. is divided into “distinctly different worlds”

Gun raffles have proliferated in recent years, mostly in the rural U.S. — raising money for police and fire departments, local civic organizations and even politicians, says David Yamane, a professor of sociology who studies gun culture at Wake Forest University.

“We really live in some distinctly different worlds with respect to guns,” Yamane says.

“You know that some people live in a world in which they only think of guns in connection with … inner city violence or random mass shootings, whereas other people live in situations where guns are a very perfectly normal part of their everyday life,” Yamane says.

“No used car dealer in New York City is going to give away a gun with a purchase of a car, you know, but if you’re in Manhattan, Kansas, instead of Manhattan, New York, that might be a perfectly normal part of people’s lives,” he adds.

Convention attendees look at various rifles and handguns in display cases that will be raffled off at the Gallery of Guns booth at the NRA annual meeting held in Houston on May 26.

Convention attendees look at various rifles and handguns in display cases that will be raffled off at the Gallery of Guns booth at the NRA annual meeting held in Houston on May 26.

JB Smith, the executive director of Deep East Texas Crime Stoppers Inc., says most contests are structured like the Lufkin-based nonprofit crime tip line’s annual “50-Gun/50-Day” raffle drawings. Contest organizers and winners never exchange a weapon. Instead, a gift certificate for the value of the raffled firearm to a gun shop or local sporting goods store is the actual prize. The store is then responsible for the sale and the background check.

The raffles are designed to meet the letter of the law and keep organizers at arm’s length from a sale that can present complications.

“So, if it’s a pistol worth $250 and they get a gift card for $250 … they could go through all the background checks and legally purchase the pistol,” Smith says.

Or not. Instead, they could use the same certificate to purchase other items at the same store. He says that, according to the local sporting goods store his organization teams with for the raffles, “few of our winners ever go in and buy the gun. They go and spend it on something else — camping gear, shoes and whatnot.”

It also means that someone who has a past felony conviction and is therefore unable to purchase a gun in Texas can still win and can use the gift card for something else.

While Smith says most winners don’t actually follow through with purchasing the firearm promoted as the prize, he acknowledges that it’s the thought of getting a gun that attracts attention and fills fundraising coffers.

Conservative politicians, too, have tapped into America’s gun culture, not only promoting “Second Amendment rights,” but appearing with guns in campaign ads, showing them off at rallies, and even raffling firearms.

In 2017, for example, attorney Corey Stewart gave away an AR-15 as part of his ultimately unsuccessful campaign for the Republican nomination for governor in Virginia, according to The Washington Post.

But these types of political fundraisers are illegal, not because of the guns, but because political campaigns do not qualify under a “charitable gaming” exemption for nonprofits, Virginia’s then-Attorney General Mark Herring wrote in a 2018 opinion. In an email to NPR, the office of Herring’s successor, Jason Miyares, wrote that “political parties and candidate’s campaign committees cannot hold raffles of any kind,” adding: “This Attorney General opinion stands and is the only opinion on the matter.”

Stewart, who has since returned to private law practice, declined to speak with NPR, saying he is “out of politics.”