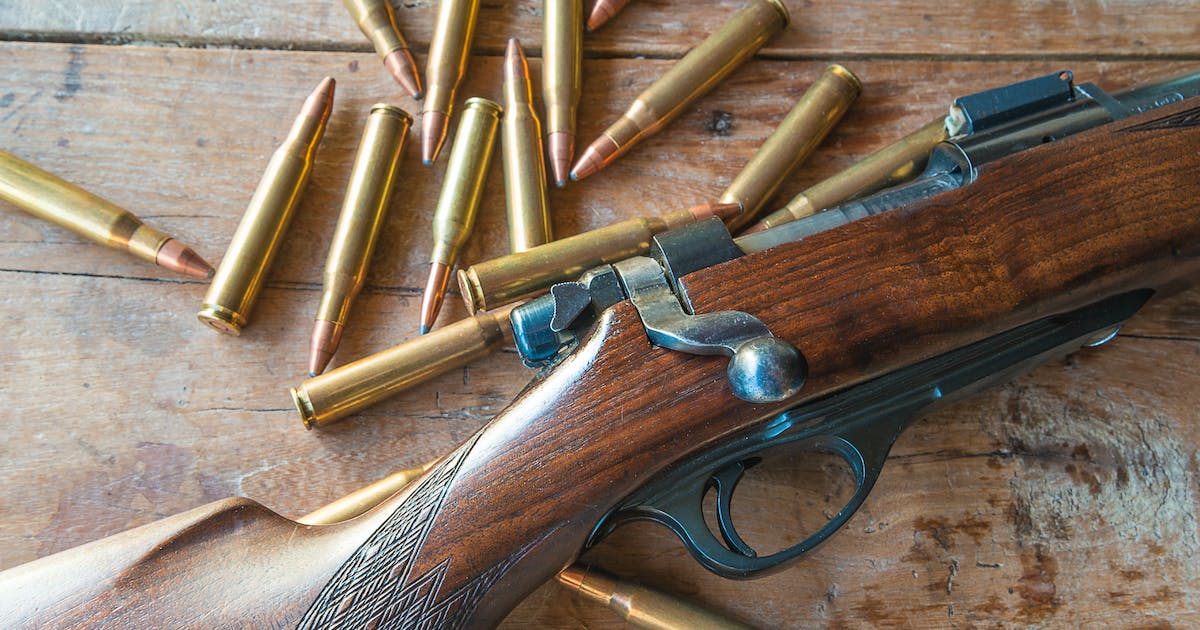 My childhood home was one such place. In the basement, perched on a caramel-colored rack on a green-paneled wall, were a rifle, a shotgun and a pistol built from a kit. Topping it off was a military-style weapon, mine.

That last one, obviously, was a toy. It didn’t have bullets. It just went bang.

I was told never to touch the real guns, and I didn’t. But if I’d ever been overwhelmed by curiosity or some other impulse, they would have been there waiting, along with the ammunition.

Maybe I was a trustworthy child. Or maybe people just didn’t worry as they do today — although as late as 2016, according to the Johns Hopkins Bloomberg School of Public Health, fewer than half of gun owners reported storing all their guns safely.

My dad wasn’t an avid hunter but enjoyed the activity. When I was old enough I joined him while carrying a borrowed .410, a lightweight shotgun with low recoil.

Dad, a veteran of the Korean War, seemed to me to be a crack shot. A pheasant would rise and he’d kill it. And he’d do so patiently, lining up his aim, leading the bird.

In contrast, I once almost shot our hunting companion by wheeling around and firing at the flutter of wings — evidence that training doesn’t necessarily stick with the excitable in the heat of action.

Later I began hunting with friends, in a fashion. I didn’t let on that I’d resolved never to pull the trigger, lest there be more near-victims or worse.

With my aim, I was unlikely to pose a threat to an intended target. Nor did I wish to. I simply enjoyed being out in nature on crisp fall mornings, with good companions and good dogs.

According to Pew, 56% of people who own a gun say hunting is one of their reasons. Seventy percent cite target shooting. Both numbers have been relatively stable for 20 years.

But 88% say they have a gun for protection against crime. That’s up from 65% in 2000. By comparison, according to Gallup, a steady 15% over the same period say they’ve experienced crime in a given year. Is there a disconnect?

Or, conversely, might there be fewer guns in fewer hands if crime was addressed persuasively to those people? I’m not dismissing the role of paranoia, nor the societal complications of tough-on-crime policies. I’m just suggesting that there’s a feedback loop.

I remember when my dad received his pistol kit. It sat around a long time before he built it, and he had some trouble once he did. Finally the weapon was ready to be fired, though I noticed that it tended not to be.

Dad certainly didn’t feel he needed any gun for safety. We locked the doors at night and that was enough.

Yet handguns that can be concealed and rifles that can be used for assault are the weapons of choice these days, comprising 75% of the firearms made by U.S. gun manufacturers in 2020. At the risk of stating the obvious, the atmosphere has changed.

Children have always played games of conquest and annihilation. My generation is possibly the first to have had an interactive shoot-to-kill option that could be enjoyed in isolation.

In my early 1980s bedroom was a small black-and-white TV, an Atari game console and a beanbag chair, in which I spent hours playing “Asteroids.” Under my control was an armed rocket ship that had to blast away impediments such as space rocks and flying saucers.

It’s hard to develop empathy for objects that are layers removed from creatures that cry out when you do them harm. I’ve never felt the activity made me emotionally calloused, though. It did help me develop skills like remote hand-eye coordination and pattern recognition that gave me an edge in the real world.

I didn’t go on to have children of my own, so I lost touch with how gaming subsequently evolved. Sometime this century, I was visiting friends when their boy invited me to see what he was playing on the computer. It was a first-person-shooter game, maybe “Halo.”

I’m not easily shocked, but I was astounded. In the foreground on a large, crisp screen was the player’s avatar, well-armed and armored in a realistic if apocalyptic environment. Enemies would pop out, killing first if they could and spraying blood when shot.

A few years later, I visited another set of friends with kids. The easiest way to meet up was to slip into their existing schedule, which on this day included a birthday party at a game center. The pièce de résistance was laser tag. Somehow I became one of a handful of adults pressed into participating. I soon found myself wearing a vest with a gadget sewn into the chest to register when I’d been hit, and wielding a gun to rack up points against all others.

For the next 15 minutes I lumbered around a darkened maze, shooting children — virtually, while trying not to literally barrel them down. I was bewildered by the absurdity. Yet I couldn’t deny that it was fun.

The tendency is to look for cause and effect in these recreational trends. But portrayals of violence have been an element of catharsis for as long as there’s been entertainment. There’s a lack of evidence that they lead to actual violence, no matter how realistic they are.

The raw number of gun deaths in the U.S. has hit records in recent years. But the rate, adjusted for population growth, has not.

The number of “active shooter” incidents — which the FBI defines as “one or more individuals actively engaged in killing or attempting to kill people in a populated area” — was 61 last year. It was half that in 2019. As it happens, June is the month with the highest incidence.

Though the active-shooter numbers pale in comparison to overall gun violence, only the obtuse would fail to see the amplifying effect on the national psyche. This isn’t a result of hype, as some suggest. You can’t bury news about a mass shooting. You also can’t deny the desire to do something about it, especially if the benefits might carry over to efforts against overall gun violence.

But do what? Well, what is the network of guns and gun policy but one big system? In systems analysis, a useful question is where to find leverage.

It won’t be found by firing fanciful shoot-to-destroy rays at impediments like the NRA and the Second Amendment. Despite a membership that represents between 1 and 2% of the population, the NRA has a bigger budget than do gun control groups put together. And this month the conservative majority on the Supreme Court will determine whether New York can deny certain concealed-carry licenses. The likely ruling is that it can’t. The only real question how broad of a precedent the court sets.

Leverage might be found in generational change. Research into gun impacts has barely begun. Eventually it could persuade people of risks not just to themselves but to others, as anti-smoking efforts did. Meanwhile, incremental but achievable laws could prevent some bloodshed while momentum for broader action is gathered, a strategy the anti-abortion movement has employed.

Finally, though it’s hard, never forget the leverage of goodwill.

One of the interesting characters at my first newspaper after college was a pressroom foreman who reminded me of Charlie Daniels, famous good ‘ol boy fiddler from the South.

Both struck me as people with whom I wouldn’t enjoy being at odds — and with whom on most subjects I probably was. Yet in the clockwork production of a small daily paper, the foreman and I had to work together well.

One day he invited me out to his farm for some skeet shooting.

I considered the offer. Good for the relationship, I thought, but bad to blow my credibility by embarrassing myself with a gun. I nonetheless drove out on an overcast fall day to go through the paces of his elaborate shooting range, where he welcomed me like a friend.

I didn’t hit a single clay target. He didn’t seem all that surprised. And in the remaining time I spent at that job, we got along just fine.