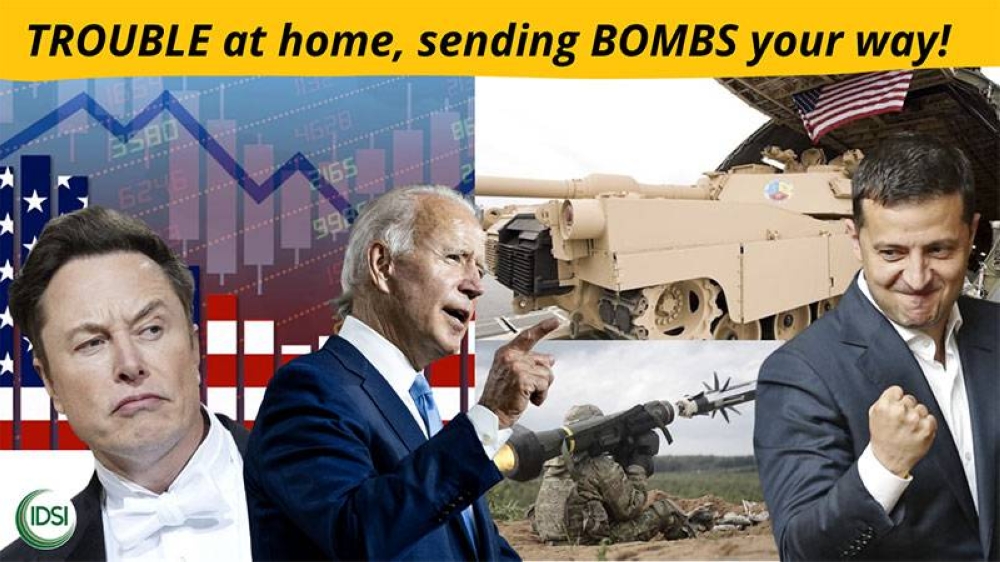 Read this in The Manila Times digital edition.

What is happening to the US?

US President Joe Biden did not hesitate to send over $40 billion in more weapons to Ukraine and to offer Taiwan military help. This while America sees over 39,000 of her citizens die from gun violence a year, over 1 million have died due to Covid-19, inflation is at an all-time high, there is shortage of baby formula, and there is ongoing immigration problems and social division exemplified by Black Lives Matter and escalating Asian hate crimes.

The US had over 39,000 gun-related deaths in 2019 (60 percent suicide and 37 percent homicide). Just recently, 21 children and teachers were killed in Uvalde, Texas by an 18-year old who shot his grandmother before committing the massacre. This happened a week after 10 elderly Black Americans in Buffalo, New York were killed by an 18-year old gunman who livestreamed his attack. The cycle of killings has galvanized an outpouring of emotions that Biden himself has called for tougher gun laws, but most experts suspect that the US Congress is largely paralyzed due to the influence of the gun lobby that claims 5 million armed voters and hold their Second Amendment dearly. While mass shootings escalate, gun rights groups led by the powerful National Rifle Association (NRA) spent five times more ($15.8 million) than gun control lobby groups ($2.9 million). A few days after the Texas school shooting, the NRA annual convention was held in Houston where Trump and top Republicans rejected gun reforms.

Get the latest news

delivered to your inbox

How many Americans know that the US spends over $800 billion in military a year and has over 900 military bases worldwide? To compare, Biden’s bipartisan infrastructure bill to modernize America’s decades-old infrastructure was $1 trillion for five years and took months of congressional battle. Meanwhile, the $40 billion more budget of killer weapons to Ukraine took only several weeks on top of the billions the US already sent to Ukraine since Russia’s special military operation started in February. There are reports that some of the mothballed weapons the US sent to Ukraine did not work, but not before the delivered helped Zelenskyy’s government retract from the negotiations with Russia — not once, but several times! — as Kyiv did whenever more deliveries of high-powered weapons arrived from the US and NATO allies.

Given the US obsession for instigating wars worldwide and after making trillions in Afghanistan’s 20-year war at the cost of over 250,000 dead, the US military-industrial complex needed another stage to use up their inventory. Raytheon’s CEO Greg Hayes admitted that “I make no apology for that (selling high-powered weapons)… We will see some benefit in the business… Everything that’s being shipped into Ukraine today is coming out of stockpiles… that’s all great news.” Biden’s Defense Secretary Lloyd Austin was also formerly a board member of Raytheon.

In another battlefront, the US is the only country that has surpassed the 1 million Covid deaths (0.3 percent of its population), with over 84 million cases (over a quarter of its population). While the Philippines had early shortcomings in the pandemic response, the Duterte government’s administration of the pandemic led to only one-sixth of the US deaths as percent of total population, with far less resources. Much of the assistance and vaccines that arrived in the Philippines during the critical months of the pandemic came from China, while the US was hijacking and hoarding supplies.

Asia, the next theater of conflict?

Some called it Biden’s latest gaffe, the latest of a string, when Biden said that the US would intervene with the military to defend Taiwan. This was after Biden also said that US aims for regime change in Russia — both statements which the White House had to quickly “clarify” by saying Biden’s statements did not reflect a policy shift for the United States.

But the US actions on the ground portray a different story.

“By continually poking at the giant developing nation, the aim is to force it to fire the first bullet — and then use that to paint China as the protagonist, the bully that the rest of the world must unite against,” wrote Nury Vittachi and Phill Hynes in “Strategists admit West is goading China into war.” They add, “Rather like the “coalition of the willing” in the Iraq War 2.0, the US is pushing for another misadventure, this time through a coalition of the coerced.”

US troops in Taiwan doubled under Biden’s first year. In November 2020, the first public acknowledgement of US Marines training in Taiwan was reported in 40 years. A week after Biden’s video summit with President Xi, the US sent guided-missile destroyer USS Milius to the Taiwan Strait, followed by USS Ralph Johnson in February 2022 and another destroyer USS Sampson in April 2022. In May 2022, the US State Department site deleted “Taiwan is part of China.” All these moves are clearly those of a provocateur rather than those of a peacemaker.

On the latest battlefront that will have a domino effect to the rest of the world, inflation in the US is hovering at a painful 8 percent, a 40-year high, and Biden has admitted it is the biggest domestic problem. He formerly suggested it would be temporary, and largely blames Covid and Putin, rather than the US-initiated trade wars, sanctions and instigations of bloody conflicts worldwide. The price shocks are wide-ranging: year on year, gas prices are up 48 percent, energy costs 32 percent, wholesale food prices 18 percent, eggs 220 percent, butter 51 percent, fats and oils 41 percent, and flour 40 percent. There are still honest Americans in leadership like Treasury Secretary Janet Yellen who admitted that “the unanticipated and large shocks to the economy, energy and food prices, and supply bottlenecks are the main culprits to the spiraling US inflation.”

JPMorgan Chase CEO Jamie Dimon went from warning of “storm clouds” to an “economic hurricane.” World’s richest man Elon Musk has a “super bad feeling” about the economy and is already cutting 10 percent of jobs, and many analysts fear that the Fed will inadvertently tip the economy into recession as it combats the price increases.

We Filipinos need to start bracing for the incoming storm! Magpakatotoo tayo!

While the recent elections have generated some optimism, the Philippines is not immune to the problems of the world — and the incoming waves will be far bigger than any we’ve faced before. It will put to test the Marcos-Duterte administration and the resilience of our people. Inflation is also already being felt, and many who will be most affected voted for the new administration. This will further increase as other countries have banned exports of key foodstuffs: India, wheat; Indonesia, palm oil; Russia and Ukraine, wheat, oats, sugar and fertilizers, among others; Argentina, corn, wheat and soybean. While we call out the US double standards and dangers of militarizing the world, we also recognize the vital role of the US in world affairs, innovation, education and individual rights.

Everyone wants a peaceful and stable America. While millions of Filipinos are working in the US, they are also one of the top victims of hate crimes, and one third of medical frontliners who died under the line of duty were Filipinos. The further deterioration of US society will inevitably hurt more people, Filipinos included. Provoking for more conflict and militarizing the rest of the world will only force countries to respond accordingly, lead to an arms race, and create more suspicion and division — exactly the opposite of what the world needs to overcome the real issues threatening humanity.

New Worlds by IDSI, for the intelligent, progressive readers who want to see the world beyond the headlines ([email protected])!