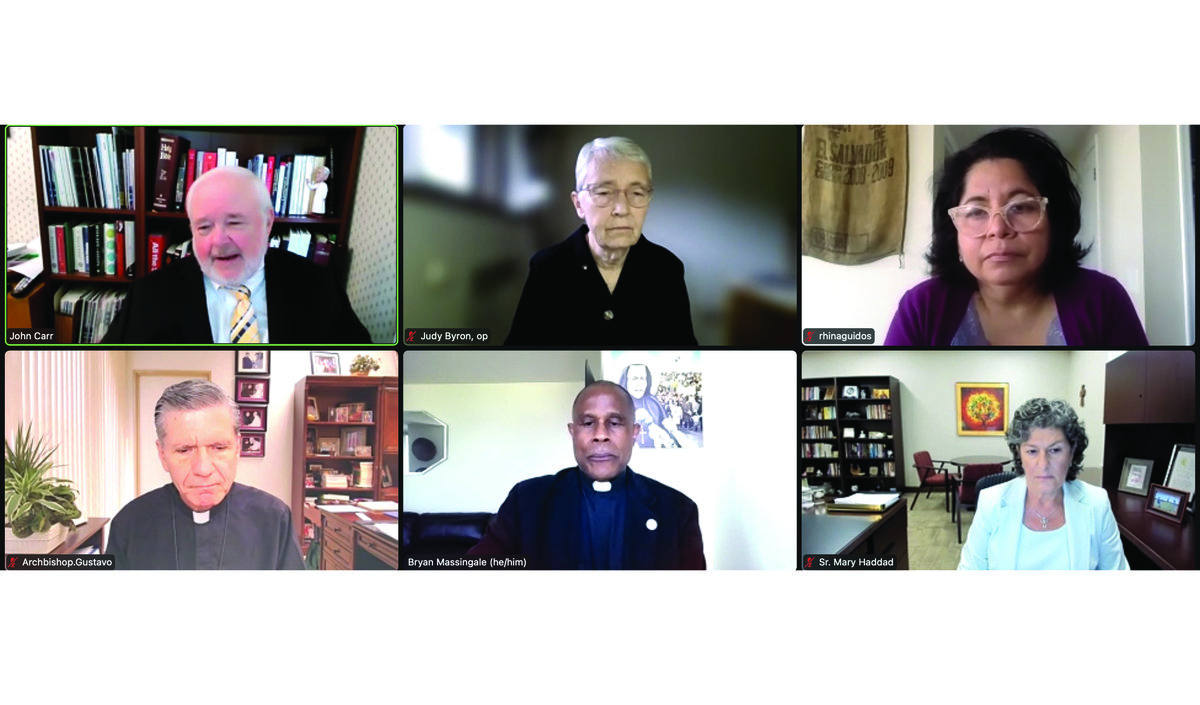 Following a rash of mass shootings across the United States in recent weeks, Catholic officials gathered for an online discussion June 8 to urge the faithful to look at gun violence as a pro-life issue, address the roots of racist thinking that promotes such violence and press for common-sense gun laws.

“Think about the people affected by gun violence, and then organize the community for the common good, advocate with political leaders, use the faith we have learned from Jesus Himself,” urged Archbishop Gustavo García-Siller, the archbishop of San Antonio, Texas, whose archdiocese includes the town of Uvalde, where a gunman opened fire at an elementary school. The archbishop also said, “Put people first. Sensitize the community to the drama and the real consequences of mass shootings.

Archbishop Garcia-Siller was one of five panelists taking part in a dialogue titled “After Buffalo, After Uvalde, After Tulsa – Broken Hearts, Broken Nation, Faithful Action.” The talk was sponsored by Georgetown University’s Initiative on Catholic Social Thought and Public Life and moderated by John Carr, co-director of the initiative and former director of justice and peace efforts of the United States Conference of Catholic Bishops.

On May 14, Peyton Gendron, an 18-year-old gunman opened fire in a racially motivated attack at a Buffalo, New York, supermarket, killing 10 Black people and injuring three others. Ten days later, on May 24 in Uvalde, Texas, 18-year-old Salvador Rolando Ramos stormed into Robb Elementary School and shot dead 19 children and two teachers. On June 1, a gunman identified as Michael Louis, 45, killed four people at St. Francis Hospital in Tulsa, Oklahoma before killing himself.

“Gun violence is a pro-life issue when you start looking at the statistics and the impact that gun violence has on life and the destructive impact it has on society,” said panelist Sister Mary Haddad, a Sister of Mercy of the Americas and the president and CEO of Catholic Health Association. St. Francis Hospital in Tulsa is a member of her association.

“The thought of such violence happening at a medical center really pushed me to the edge,” she said. She added that such violence “is not only a safety issue, but a financial issue. Hospitals have to spend more dollars for security, and that is money being diverted from care and treatment of patients.”

Sister Haddad urged the faithful to “hold our elected officials accountable and demand that action be taken to address gun violence in our country through sensible gun polices.”

That call was echoed by panelist Father Bryan Massingale, a professor of theological and social ethics at Fordham University in New York.

“All too often we frame this (issue of gun violence) as a political issue, not a life issue,” he said, calling for lawmakers to support “common-sense gun legislation” including banning assault weapons, raising the age to legally purchase firearms and requiring mandatory waiting periods.

He said the lawmakers are influenced by the power and money of groups such as the National Rifle Association. “The Church needs to stop being afraid of controversy, we need to name names,” he said. “The reasons why (gun legislation) is not being enacted is because of the influence of money.”

Speaking of the supermarket shooting in Buffalo, New York, Father Massingale stressed that it was a racially motivated hate crime.

Catholic social teaching, he said, “calls us to have deeper respect for life, even post-birth… especially for Black and Brown lives.”

“We need to be forthright and talk about the fear that keeps good, white Catholics silent on this issue (of racism),” Father Massingale said. “We need an infusion of courage among good, decent white Catholics to speak up that racism is wrong, and to turn that into action.”

Archbishop García-Siller recalled rushing to Uvalde after the shootings, comforting those who lost children, visiting the wounded and celebrating Mass.

“The experience was something you don’t expect to see or live. I need to be there and connect with people. I had to be with the people and help them recognize that every life is important –those who died, those who survived and those around them,” the archbishop said. “I didn’t know how to express myself except though gestures… to be of comfort and consolation.”

He added that in the aftermath of the shooting, the people of Uvalde – many of them Catholic – clung to their faith. “The faith component was there. People were asking for prayers and trying to understand that God was at work,” the archbishop said, adding that “at that stage, faith was not missing, it was increasing.”

Sister Judy Byron, an Adrian Dominican sister who is the associate director of the Intercommunity Peace and Justice Center in Seattle, Washington, and the director of the Northwest Coalition for Responsible Investment, called on gun manufacturers to address and take responsibility for the damage their products cause.

“Gun manufactures have not taken any responsibility for gun violence,” Sister Byron said. “We are asking them to look at the guns they manufacture and how to make them safer and to monitor how they market them.”

Similar to other members of the panel, Sister Byron urged the Church to be an active voice for an end to the violence.

“We need to educate ourselves. In our parishes we need to educate the faithful,” she said. “Most people experience the Church only on Sunday, and we need to use the Sunday homily to call the people to the common good and to the issues of our day.”

Sister Byron praised the Catholic response to the shootings, saying “from the pope to the bishops to this panel – the response of the Church has been as it should be. I am proud to be a Catholic at this sad time.”

Noting how bishops have visited the shooting sites and have spoken out against the violence, Guidos said that and the rapid response of Catholic Charities and the laity in those instances reflect “the physical manifestation, the incarnation of a field hospital that the pope very much wanted of the Church.”

Guidos said the faithful must examine this issue from a moral, not a political perspective.

“In a way politics has become a religion, and we have to look at that,” she said. “We need to talk to each other and look deep inside ourselves. Think about ‘How am I looking at this’ and ‘How does my decision affect another person?’”

Archbishop García-Siller called on the faithful “to be led by the Spirit and listen to the stories of the people who were there… We have to examine this at the level of policy where guns have become idols – sacred items that kill people.”

“We have systems that are obsolete and failing, keeping communities in fear. Young people are afraid. Children don’t know what to do. The respect for other people is not there,” he said. “There is much to lose – we are losing the lives of children and young people and adults and elderly in hospitals and schools and churches. We need to do something about these dead bodies. It is enough, enough, enough.”

The shootings which prompted the dialogue at Georgetown University, preceded a string of shootings last weekend that resulted in numerous deaths and injuries across the United States.

Also on June 4 in Philadelphia, several shooters opened fire into a crowd gathered on the city’s popular South Street, killing three and wounding at least 11 others. That same day, a drive-by shooting at a private graduation party in Summerton, South Carolina, killed one person and injured seven.

Early Sunday June 5, a shooting near a Chattanooga, Tennessee nightclub resulted in three deaths and 14 injuries.

According to the Gun Violence Archive, an online data collection site that collects reports of gun violence incidents from more than 7,500 law enforcement, media, government and commercial sources, as of June 8, 2022, there have been 248 incidents of mass shootings in the United States so far this year.

Carr, the moderator of the panel, noting that more than 2,500 people registered to follow the event via various social media platforms, said, “There is a hunger for civil dialogue at this time.”

Lamenting “the same stale and deadly talking points” following such shootings, he said “the sanity caucus in this discussion is way too small.”

“In the end this is about human beings made in the image and likeness of God,” Carr said. “Let us resolve we are not just going to think, but we are going to act and make our voices heard.”