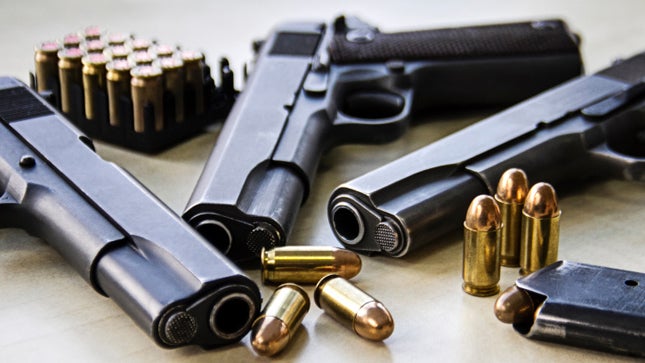 Five House Republicans and one Democrat broke with their respective parties Thursday in a vote to nationalize red flag laws, which would allow courts to seize firearms from individuals deemed a threat to themselves and others.

The bill, titled the Federal Extreme Risk Protection Order, cleared the House in a 224-202 vote that mainly broke along party lines. It allows law enforcement and family members to petition courts to issue federal extreme protection orders that would temporarily bar people from purchasing or possessing firearms.

House Minority Whip Steve Scalise (R-La.) had encouraged members of the conference to vote against the bill, arguing that it includes “overly broad language,” ignores due process rights and “tramples on Americans’ 2nd Amendment rights.”

Passage of the bill came one day after the House approved a sweeping gun package that, among other measures, would raise the minimum age to purchase a semi-automatic weapon from 18 to 21 and ban high-capacity magazines for civilian use.

Upton, Kinzinger, Gonzalez, Fitzpatrick and Jacobs also supported the package on Wednesday. They were the only GOP “yes” votes. Republican leadership encouraged members of the conference to oppose the measure, arguing that it violates the Second Amendment and “hinders Americans’ ability to defend and protect themselves and their families.”

Upton, Kinzinger, Gonzalez and Jacobs have all announced that they will not seek reelection this year.

Jacobs bowed out of running for another term last week after coming under fire within the GOP conference for backing an assault weapons ban. The New York Republican, who had been endorsed by the National Rifle Association in his 2020 congressional bid, said he would support a bill to ban assault-style rifles if it were brought to the floor.

On the Democratic side, Golden has voted against gun measures in the past — most recently on Wednesday, when he opposed the sweeping gun package and five of its seven provisions.

He also voted against the rule advancing the package and red flag bill.

In a statement on Wednesday, Golden said the House “hastily” brought “partisan legislative packages” to the floor “that stand no chance of becoming law.”

“While a handful of the individual provisions in the two bills before us have the potential to garner bipartisan support, taken as a whole, the bills are too sweeping in their design and fall far short of the support necessary to become law and save lives,” he said.

“I regret that the House did not follow the Senate’s lead and engage in a substantive, bipartisan process that could positively contribute to a final agreement,” he added.

The Hill reached out to the six lawmakers for comment on their votes.

“We Are Not Waiting To Do What’s Right” – Gov. Carney Signs 6 Gun-Related Bills – WGMD
Your thoughts on serving both God and guns
Letters from Readers, July 1, 2022 | Letters
NRA says California DOJ put ‘vulnerable’ gun owners ‘at risk’ with data leak, plans legal action
‘I smoke weed and I go to strip clubs. But I care about people!’ Killer Mike on rapping, politics and race | Run the Jewels