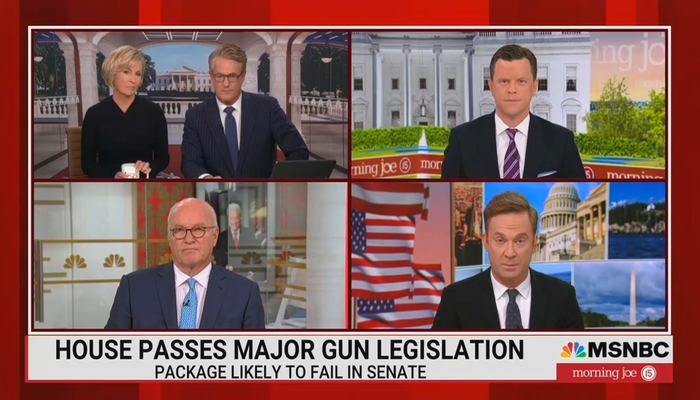 The upcoming January 6 hearings are not the only subjects being unnecessarily dragged on and on by the liberal media. On Thursday’s edition of Morning Joe, viewers had the privilege of seeing Scarborough and friends once again continue ranting about the GOP as monsters unmoved by children killed in mass shootings.

When reacting to Congressman and assassination attempt survivor Steve Scalise’s (R-LA) speech about gun control, where he compared banning guns to banning airplanes after 9/11, the show’s hosts acted absolutely appalled; with Mika Brzezinski commenting that it was “unspeakably stupid.”

This little fuss Geist made about feral pigs and prairie dogs shows just how out of touch he is with some parts of America because for some Americans, guns are a much needed tool for daily life.

And of course, the show’s namesake, host Joe Scarborough said his unnecessary piece because the show clearly wouldn’t be complete without it.

He went off on firearm case law, claiming that these Republicans “don’t understand the law behind the Second Amendment”, and “you look at the Second Amendment as in interpreted by Heller, you basically have Scalia and the rest of the Court saying you have a right to keep a handgun in your house and a shotgun. That’s basically what it says.”

He further ranted that watching people who don’t understand the Second Amendment is “like a dialogue out of ‘Dumb and Dumber.’”

Since we’re throwing around case law and all. It is true that the 2008 Heller case is an important Second Amendment case, but it appears Joe forgot about another consequential case: United States v. Miller of 1939. This 20th century case found that a sawed-off shotgun was illegal to own because it didn’t have a proper function within a well-regulated militia.

Scarborough then circled back to Congressmen Scalise’s 9/11 comparison attempting to throw TSA regulations in his face. “TSA regulated the hell out of air travel,” Scarborough exclaimed, “You would get checked at the gate. Like, you had to get patted down. You’re still getting patted down. Liquids — Mika and I just traveled. Liquids taken out.”

Gun reform and post-9/11 are completely different things, Joe. It is widely accepted that those TSA “pat-downs” are mostly theatrics. Not only that, but when tested for the real thing, the TSA actually fails to catch most prohibited objects.

Way Too Early host Jonathan Lemire joined in on the conversation by calling the excuses a “fog machine, just trying to deflect, trying to distract.” He further said that no one wants to ban guns despite multiple Democratic politicians saying that’s what they hope to do.

Viewers always get the same spiel from these people: Republicans equal bad, Republicans equal evil. And this spiel is delivered in different variations over the course of three hours. It is safe to say that the American people have better uses of their time than watching these rants on an everyday repeat.

This example of media bias was made possible by Walmart and Liberty Mutual.

WILLIE GEIST: Where to begin there? Next week –

SCARBOROUGH: Where was he?

MIKA BRZEZINSKI: This is unspeakably stupid.

SCARBOROUGH: You know, this really is. For people who really aren’t familiar with constitutional law and they don’t understand the law behind the Second Amendment, and the case law, two centuries of case law which was fairly quiet until, I believe, it was 2008 with Heller, you don’t understand that when these Republicans are talking and saying, like Jim Jordan said on the House floor, that it was destroying the Second Amendment, this is like — if you understand the law, this is like dialogue out of “Dumb and Dumber.” This is Lloyd Christmas, gentleman lawyer. These arguments are insane. And Jonathan Lemire, I hear the arguments from Steve Scalise.

BRZEZINSKI: He thinks people are stupid.

SCARBOROUGH: They didn’t ban airplanes. Well I’ll tell you what they did do. TS– But he knows this.

Even, what, how many years later, 21 years later, of our bags in one airport and all thrown out, separated. They checked them. I mean, they have so hyper-regulated air travel to stop another 9/11. And guess what? It’s worked.

So I guess what Steve Scalise is telling us is he is totally fine with the hyper-regulation of guns. Because if his model really is 9/11, there are a lot of progressives that would say, bring it on.

But again, it is — it’s like Lloyd Christmas goes to Congress. Every argument from these Republicans, dumber than the last.

And let’s remember it was Richard Reed, actually, was the attempted shoe bomber a few months after 9/11. It was one incident of one guy trying to blow up something with his shoes. And since then, every single person who steps foot on an airplane has had to take off their shoes. One incident. We’ve of course had, sadly, hundreds of mass shootings this year alone.

But certainly, what we heard from Scalise yesterday is further Republican fog machine, just trying to deflect, trying to distract. There’s certainly, polling that suggests the large percentage of Americans are not with them on this. And now to question of what can happen in the Senate.

And certainly, the House passed a series of bills last night, six in total, with some sweeping restrictions. Those, of course, none of them will become law.

But there are efforts there in the Senate where they think some things can get done. Talks have stalled a little bit. There is some optimism, both sides, that eventually this will get done. Likely not this week, probably spill into next. And there is that ticking clock. They fear the longer this drags on, momentum will fade. Before you know it, we’ll be at the July 4 campaign for Congress, and then it is campaign season.

So, there is urgency to get something done. They still believe it will, but aides in it process told me last night, it is focused largely on small measures, expanding background checks, a little red flags. Better than nothing, Mika, but incremental.

If you look at the Second Amendment as in interpreted by Heller, you basically have Scalia and the rest of the Court saying you have a right to keep a handgun in your house and a shotgun. That’s basically what it says. Maybe that gets expanded with this New York City case, but we don’t know until the New York City case goes down.

Steve Scalise raised one important question in his little spiel about banning airplanes. The question he asked in his little clip there that we just showed is, why did this happen? Speaking of Uvalde, Texas.

Well, it happened because and only because one 18-year-old child, 18 years of age, was able to walk in on his birthday to a gun shop and buy two assault weapons, two rifles, two of them. Not one, two. And he used one of those weapons to kill 21 people in a schoolroom. And we have a United States Congress where people come and appear before various committees, including yesterday, and they look into the eyes of members of Congress, elected to help people, and they tell them, “my daughter is dead. But there are other children in this country who need your help. We need your help.”