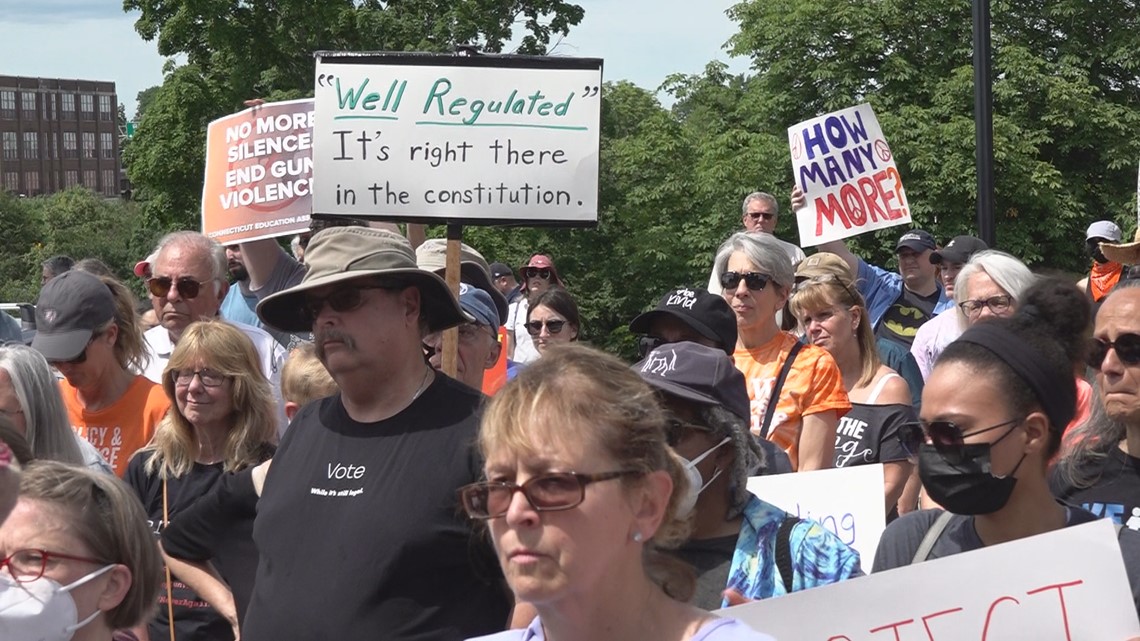 Hundreds marched from Bushnell Park to the Capitol Saturday to call for nationwide gun reform after the Texas elementary school shooting.

HARTFORD, Conn — Hundreds of students, teachers, parents, lawmakers, and community members marched from Bushnell Park to the Connecticut Capitol in Hartford on Saturday as part of a nationwide March For Our Lives rally.

Co-organizer Alan Cavagnaro, a junior at UConn, said it was to highlight what’s happening in the country and call for gun reform.

“I think the message is simply that really, on the second amendment, and highlighting that we’re not trying to take away all the guns. It’s assault rifles. It’s more gun control. It’s trying to limit everything. It’s trying to save lives,” he said.

“It’s getting to the point where there’s no one in this country that isn’t affected by this now which is a very sad unfortunate thing,” he said.

His friends Kaylee Connors and Dominic Rowland said gun violence is a problem in America. Connors is studying to become an educator. She said, where Connecticut has taken gun reform steps, other states need to follow.

“These are children that are being killed. It’s not okay,” she said. “This is the first time in my life I’ve ever reconsidered or really thought about being a teacher. It’s something I’ve always wanted to do since I was a kid.”

Chants like “no more violence,” “enough is enough,” and “do your job” were heard. Many are calling on Congress to pass gun reform laws including an assault weapon ban and background checks.

“Gun violence is a preventable epidemic and it is terrorizing our children yet again and again our leaders choose to do nothing. They look away,” one speaker said.

The House of Representatives passed a gun control bill Wednesday. It heads to the Senate where it would need at least 10 Republican votes to pass.

Part of the bill includes requiring the safe storage of weapons so children under 18 can’t access them, inspired by Connecticut’s Ethan’s Law.

Many at the rally, including Democratic Senator Rich Blumenthal, said the National Rifle Association needs to get out of politics.

“The NRA has got to go,” chants said.

“Our leaders at the national level are doing nothing to stop this. It’s becoming almost incentivized by lobbyists to not only own but use your firearms,” Rowland said.

New Haven student Preston Parker with Connecticut Against Gun Violence said there’s a constant fear for students that they “have a target” on them. He said everyone has been impacted by gun violence even if indirectly.

“This is a continuous cycle that I hope you realize will not end unless you do something about it,” he said.

He said continuing to rally and spread the message is how the change will happen. They want to encourage young people to register to vote and support politicians who believe in stricter gun laws.

“Deadly assault rifles should not be in anyone’s hands,” he said. “Teachers should not have to walk in the building every day and think about how much time they have to lock their door based on where they are in the school.”

He said there also needs to be more money put towards mental health in school.

Have a story idea or something on your mind you want to share? We want to hear from you! Email us at newstips@fox61.com

HERE ARE MORE WAYS TO GET FOX61 NEWS

Stream Live on ROKU: Add the channel from the ROKU store or by searching FOX61.