A man stormed the  stage during the ‘March for our Lives’ protest against gun violence, causing an stampede as thousands of attendees fled in terror when he reportedly threw an object at the audience.

More than 5,000 people attending the event at the National Mall in Washington, DC, cowered on the floor after the unidentified pro-gun protester came onstage during a moment of silence.

‘I am the gun I am using! I am not shooting a school,’ the man said as security personnel attempted to escort him off the stage, before seemingly throwing a can at rally attendees behind the barricades.

The disturbance only lasted a few moments and officials at the rally rushed to assure those present that the man was not armed, The Sun reported.

‘Do not run, I repeat, do not run! There is no issue here,’ a speaker on stage told the crowd immediately after the incident.

The man has since been arrested and US Park Police has opened an investigation. 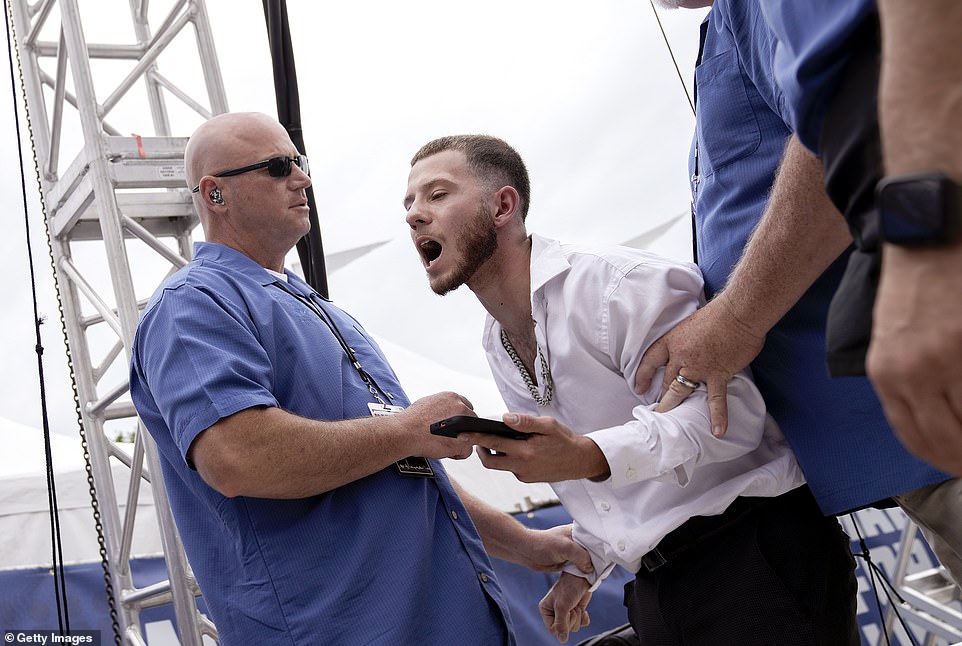 A counter-protester is detained after jumping a barricade in an attempt to disrupt a March for Our Lives rally against gun violence on the National Mall June 11, 2022 in Washington, DC 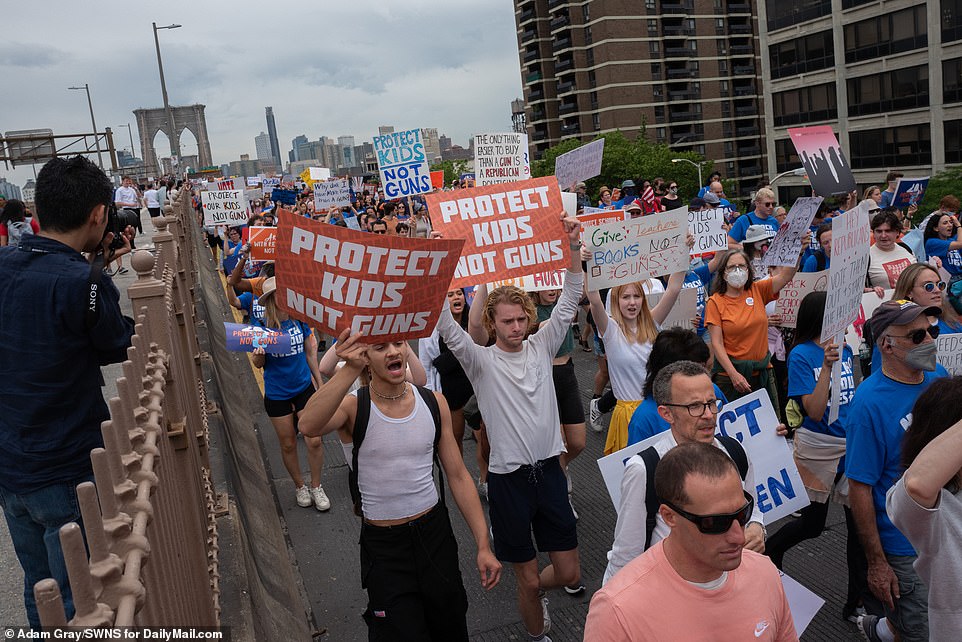 Protester in New York City march across the Brooklyn Bridge on Saturday, just two weeks after the Uvalde shooting, where 19 children and two teachers died 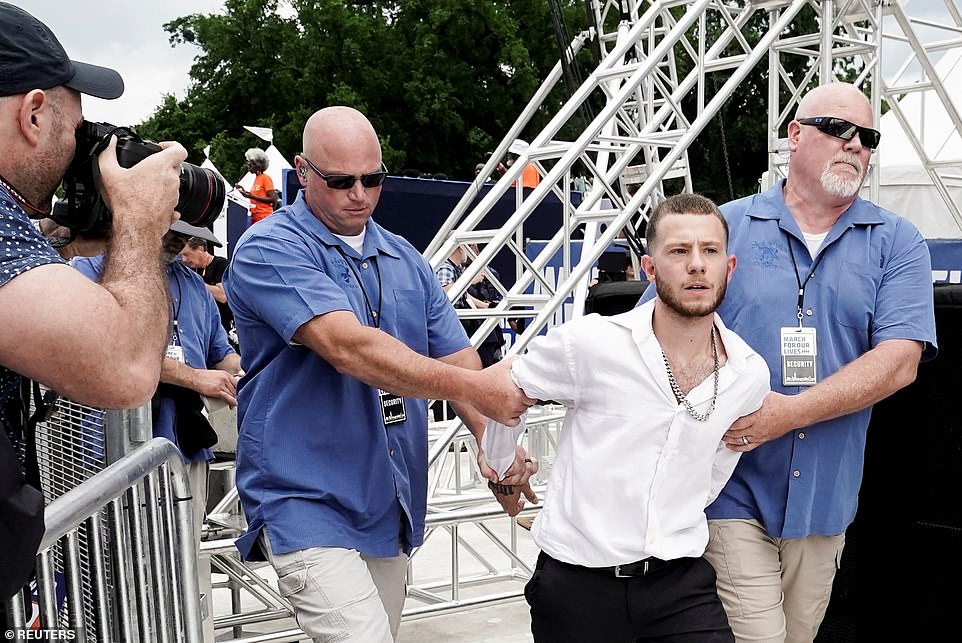 The man was later arrested. An investigation has been opened into the incident 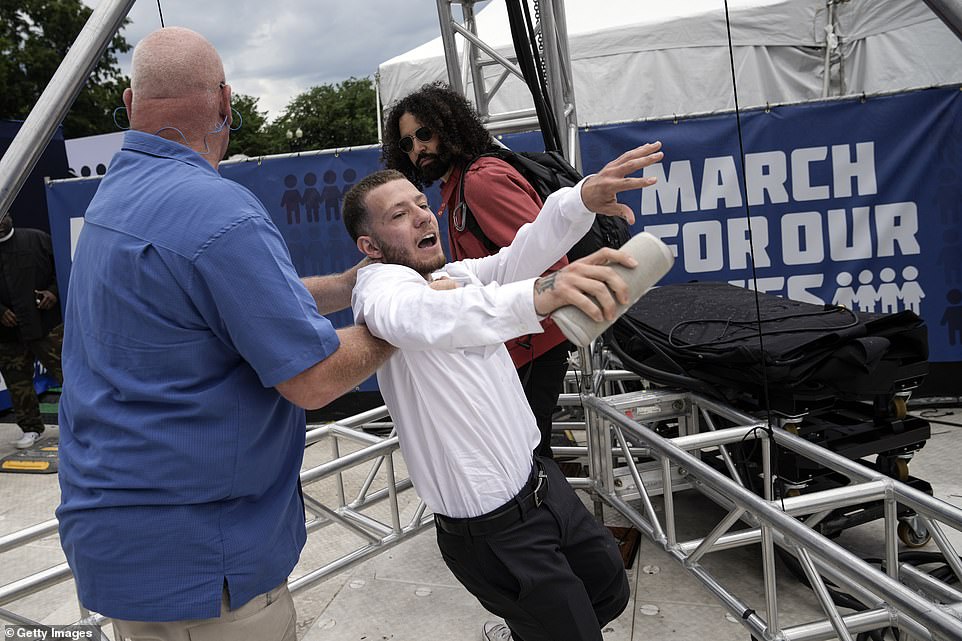 ‘I am the gun I am using! I am not shooting a school,’ the man said as security personnel attempted to escort him off the stage, before seemingly throwing a can at rally attendees behind the barricades

Thousands of people gathered across 400 US cities to protest for tighter gun violence, just two weeks after the Uvalde, Texas, shooting, where 19 children and two children were massacred.

The Uvalde and Buffalo supermarket shootings, where 10 black people where shot dead, helped sparked the call for action on Saturday.

Gun violence has killed more than 19,300 people so far this year in the United States, according to the Gun Violence Archive.

‘After countless mass shootings and instances of gun violence in our communities, it’s time to take back to the streets,’ March for Our Lives organizers said on the website.

‘Demonstrate to our elected officials that we demand and deserve a nation free of gun violence,’ it said. 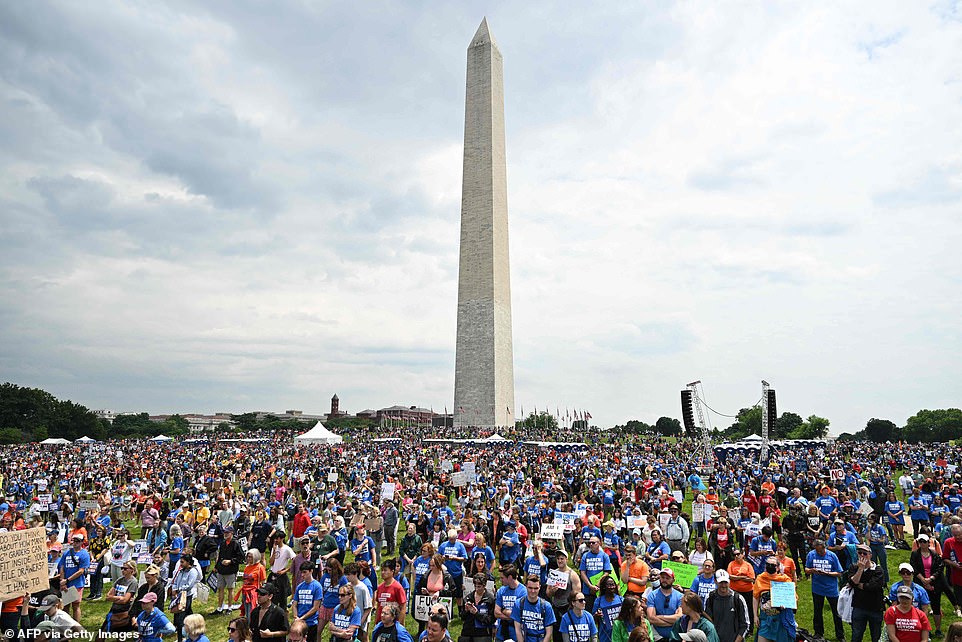 Thousands of people show up to the National Mall to protest gun violence as Congress and lawmakers struggle to decide how to handle gun violence in the US. Gun violence has killed more than 19,300 people so far this year in the United States, according to the Gun Violence Archive 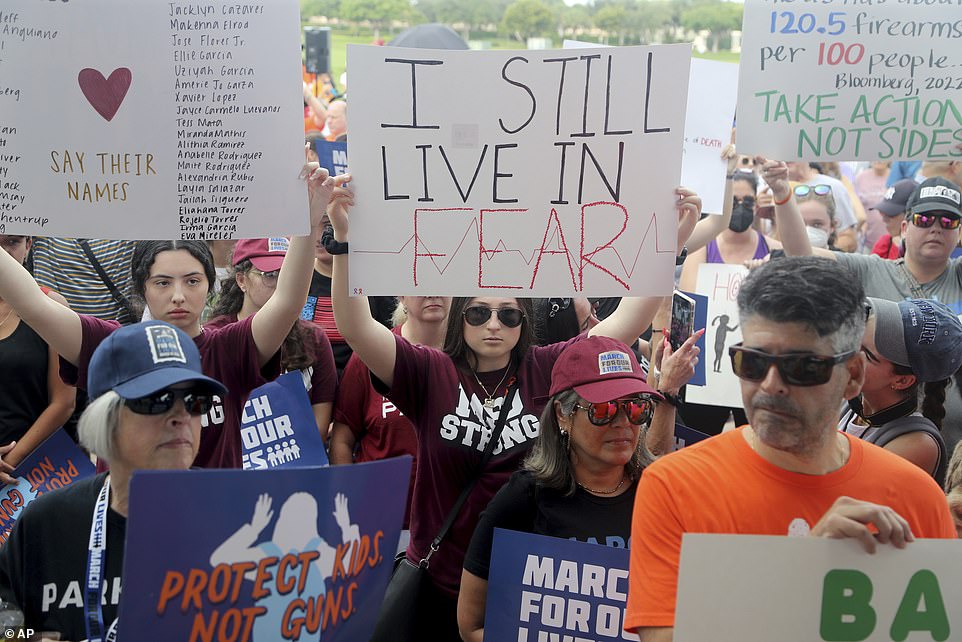 A Parkland protester holds a sign that reads: ‘I still live in fear.’ The March for Our Lives protests started in Florida after the Parkland shooting. It was created by former student, David Hogg 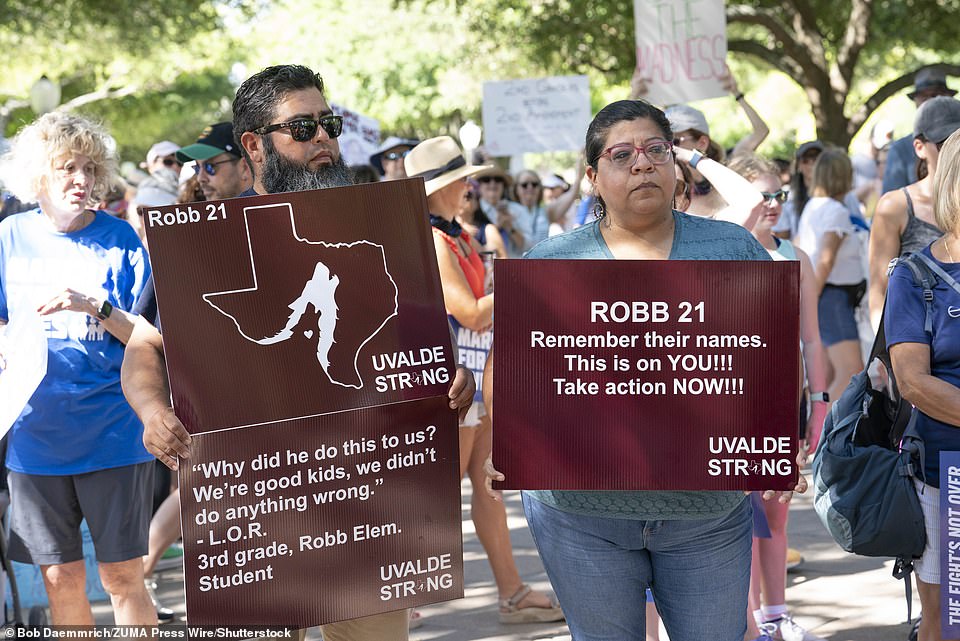 March for Our Lives was founded by survivors of the shooting at a high school in Parkland, Florida, who organized a rally that drew hundreds of thousands of people to the nation’s capital in March 2018.

Other cities like New York saw thousands gathering near the Brooklyn Bridge in downtown Manhattan, including Mayor Eric Adams, 61.

Thousands marched in a tightly packed group across the iconic bridge holding a light colored March Against Gun Violence banner. Many behind them held homemade signs and American flags, while dressed in red, white, and blue. 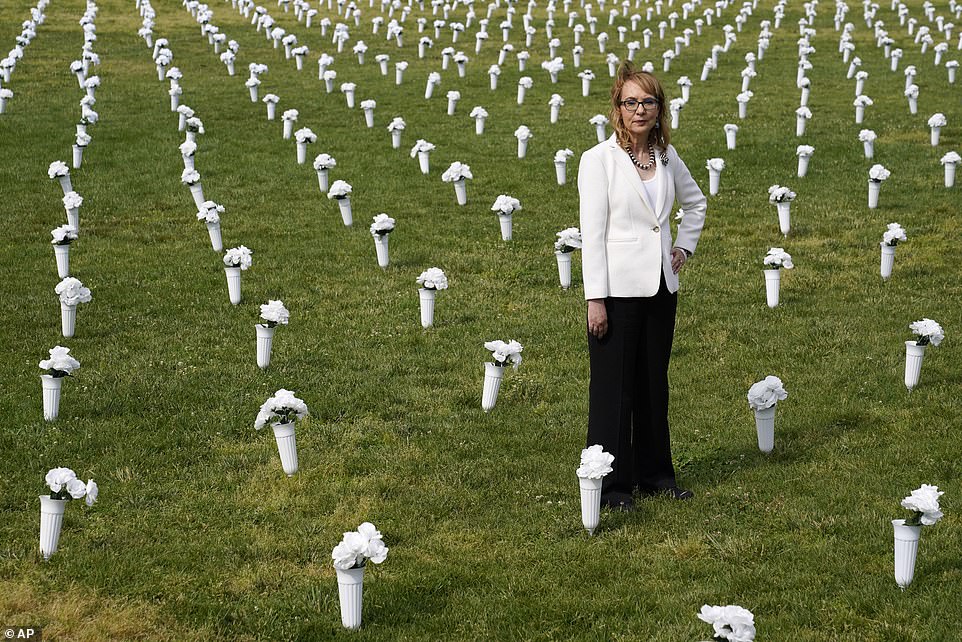 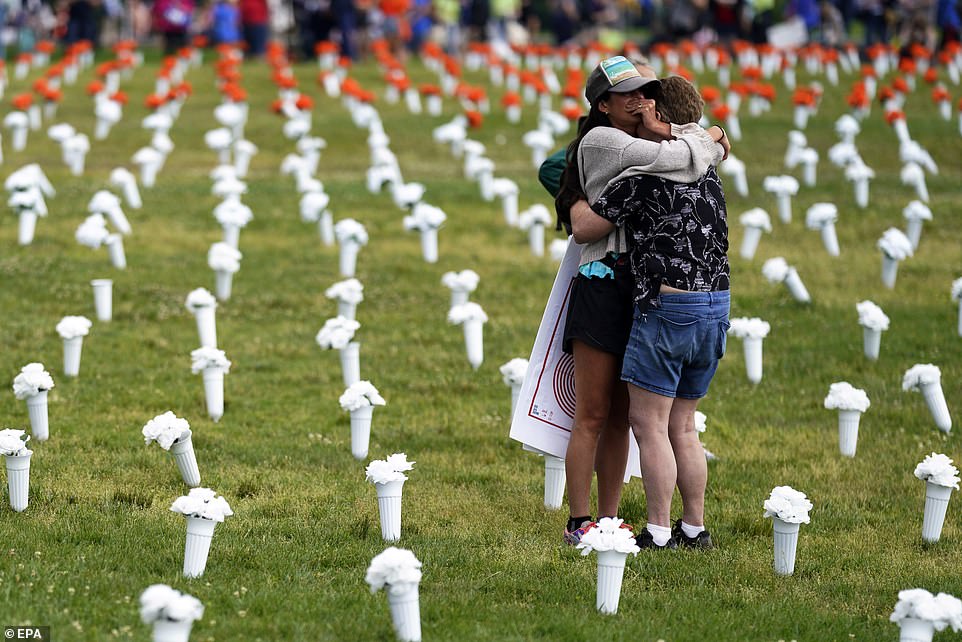 Two women cry and hold each other as they stand among the flowers. Each bouquet holds 10 flowers and represents 10 people who have died from gun violence in the US

Even more gathered on the National Mall in DC to listen to Parkland survivor and found of March for Our Lives, David Hogg.

David Hogg, former Parkland student and a founder of the organization, appealed for Americans of all political stripes to take part in the Saturday protests.

In a Fox News op-ed, published on Friday, Hogg wrote: ‘Whoever you are, march with us…Gun owners, NRA members, Republicans, Democrats, independents, and people from all backgrounds are fed up and it is time we make Congress do something.

‘If we can agree that killing children is unacceptable, then we need to either prevent people intent on killing from getting their hands on the guns they use or stop their intent to kill in the first place,’ he said. 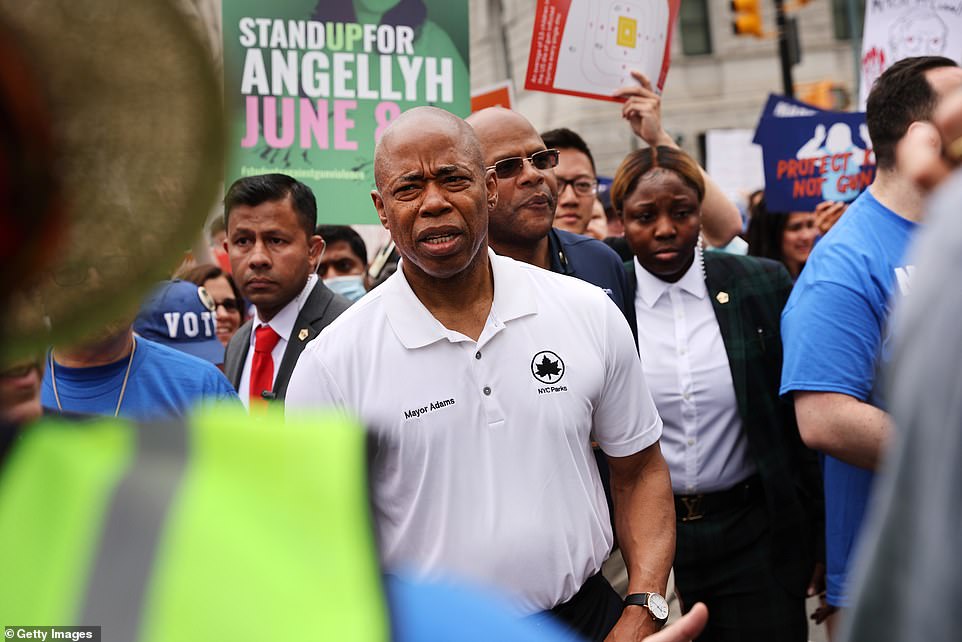 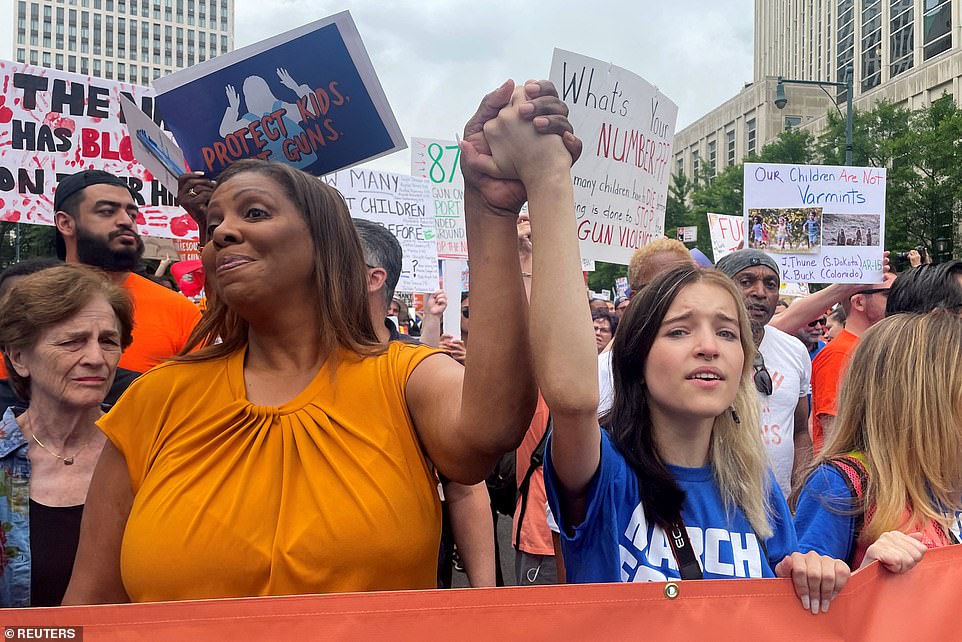 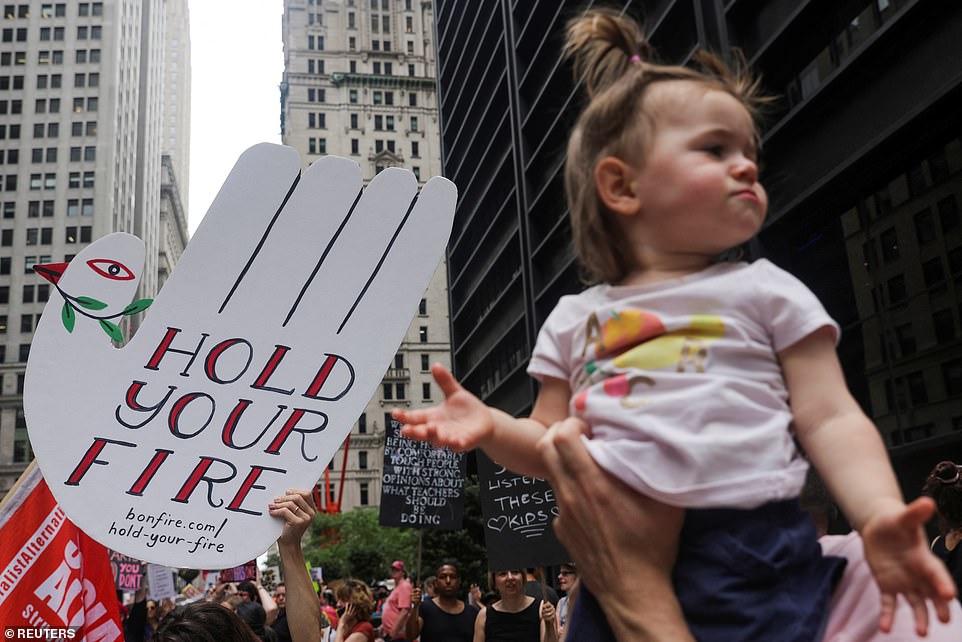 A baby joins the protest pin New York City as parents, teachers, and the public protest to protect school children and shooting victims 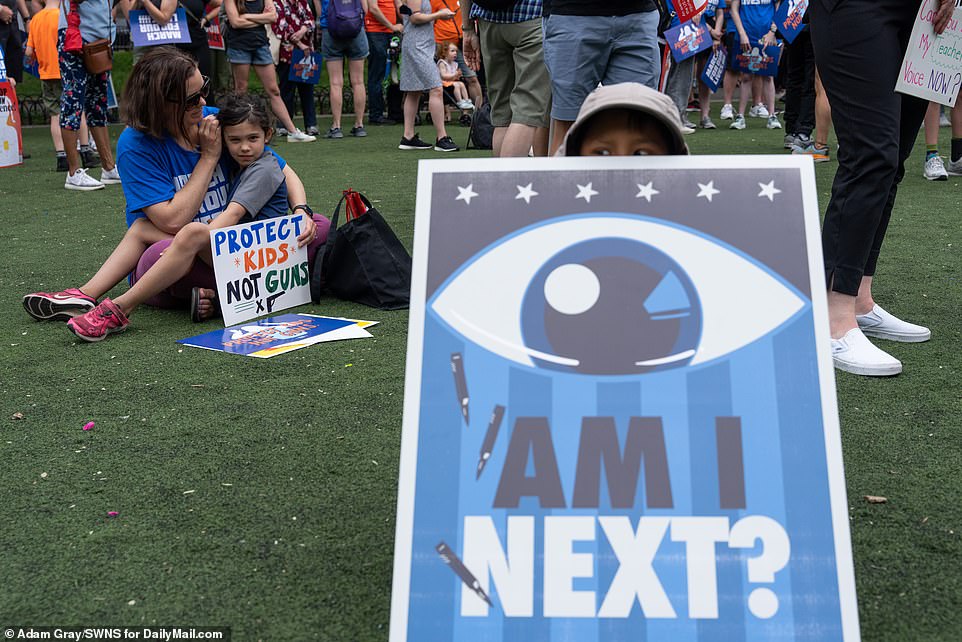 A child holds a sign that reads: ‘Am I Next?’ in New York on Saturday as another mother cradles her child in the background

Both issues have been in the spotlight in the wake of the May 24 shooting at Robb Elementary, which was carried out by a gunman who bought two assault rifles shortly after turning 18.

Gun control advocates are calling for tighter restrictions or an outright ban on the rifles, which were used in both Uvalde and Buffalo.

Opponents of tougher regulations have meanwhile sought to cast mass shootings as primarily a mental health issue, not one of access to firearms.

Mariah Cooley, a March for Our Lives board member, highlighted the toll gun violence has taken on both her and the country.

‘I lost important people in my life – including my cousin – to gun violence before the age of 18,’ Cooley wrote in a Friday op-ed for The Hill.

‘While this statement in itself is a tragedy, the bigger tragedy is that this is a reality that far too many Americans can relate to,’ she wrote. 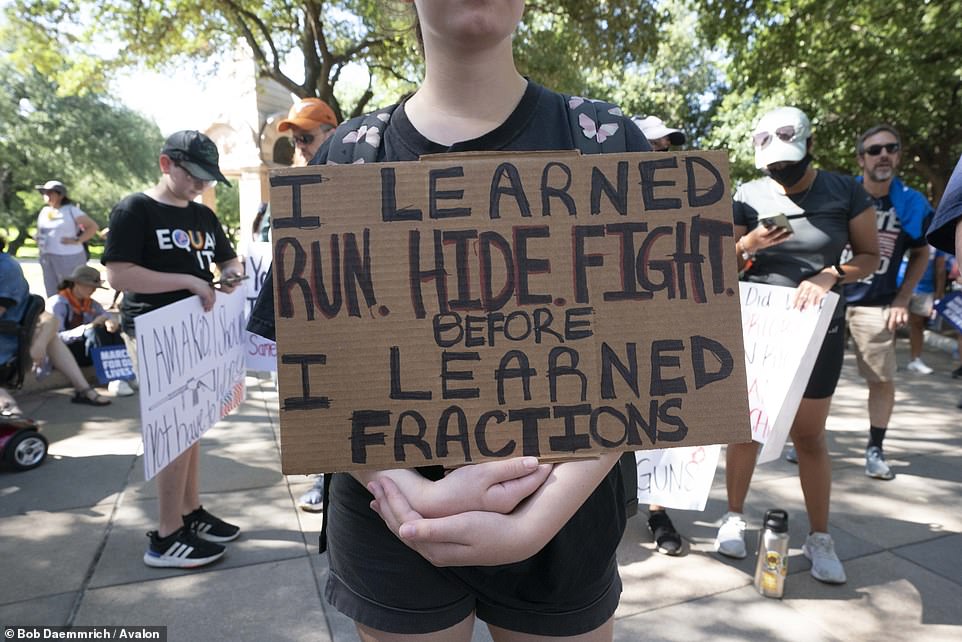 A female student holds a sign that reads: ‘I learned run, hid, fight, before I learned fractions’ 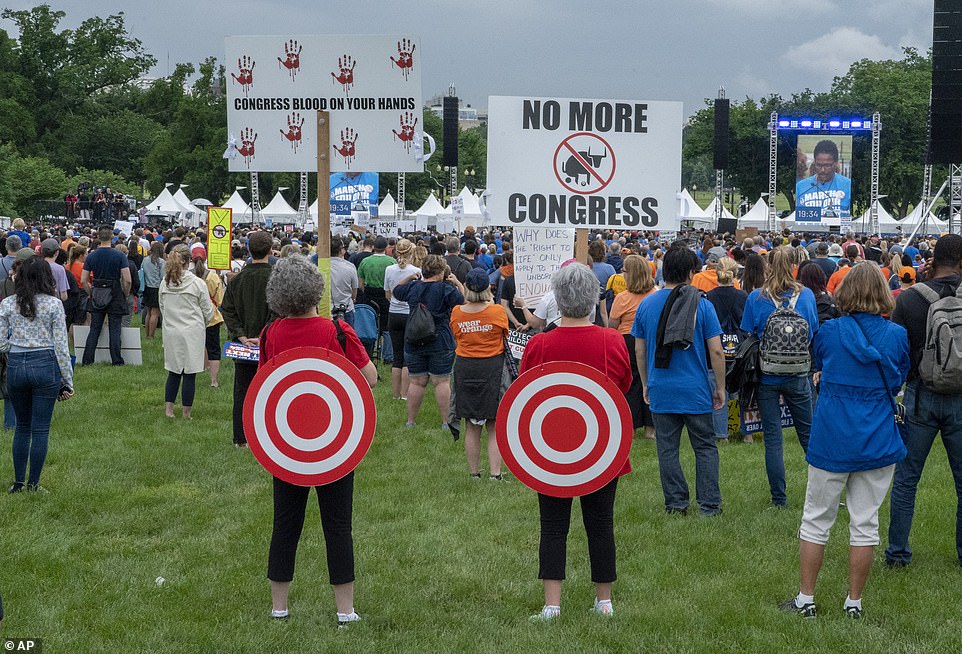 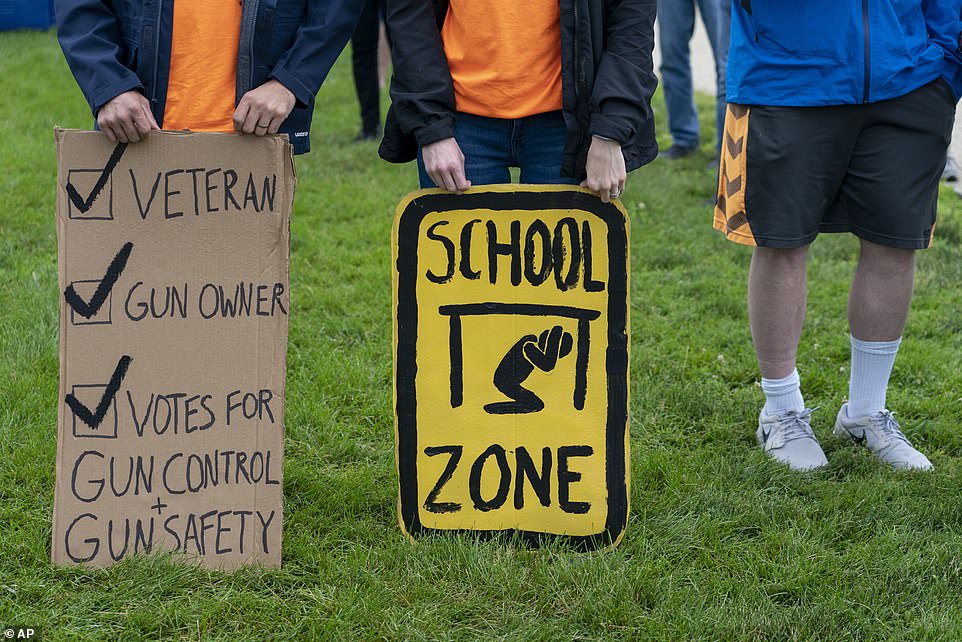 A group of men, with one being a gun owner, stand up to protect children. One of the signs show a school zone as a child hiding under a desk rather than a low-speed driving area 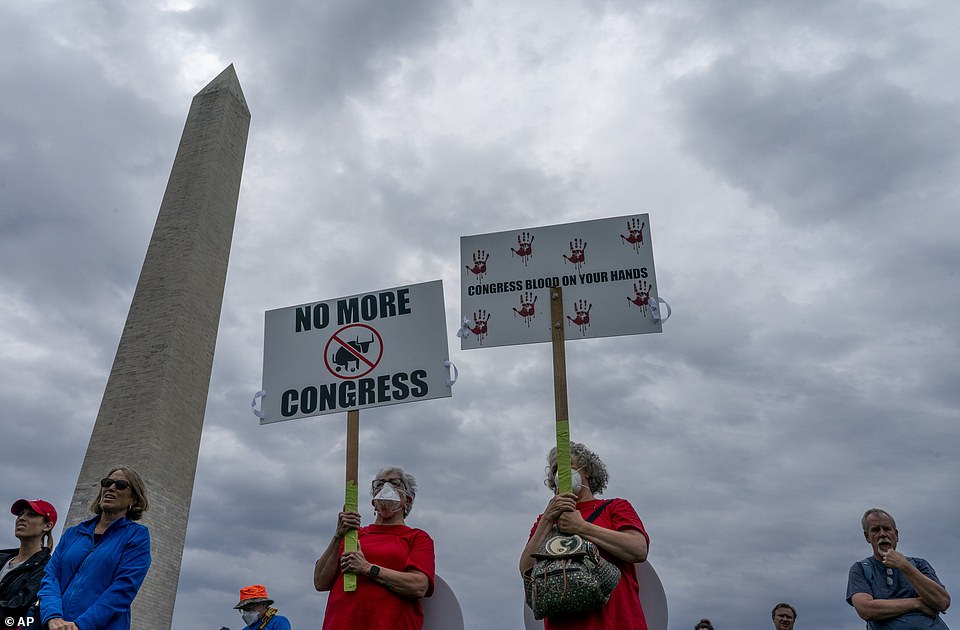 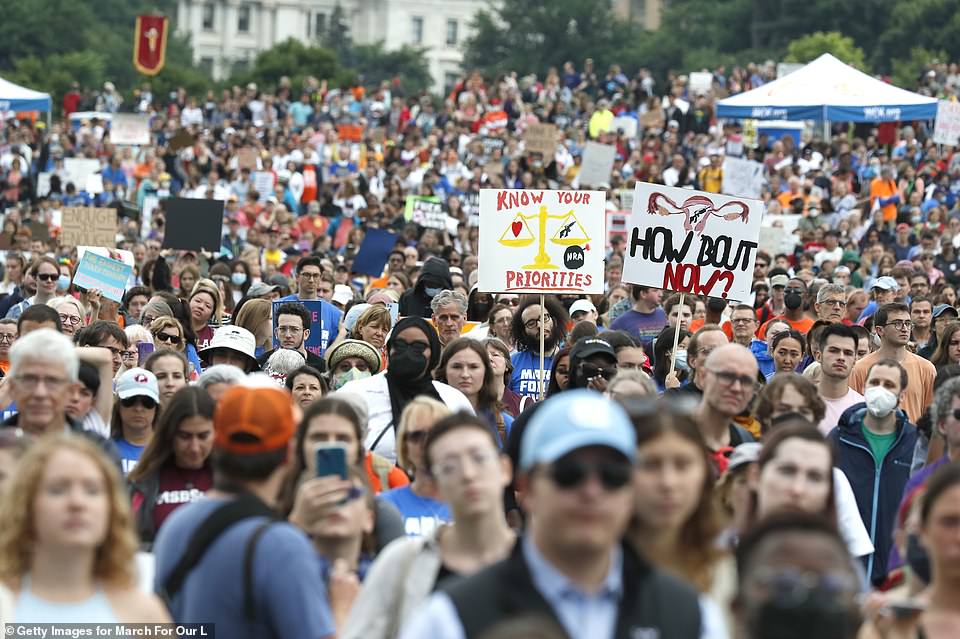 A large group in DC gather on the National Mall. Two protesters even hold sign protesting against the upcoming Roe v. Wade decision. A draft leak said the case could be potentially overturned 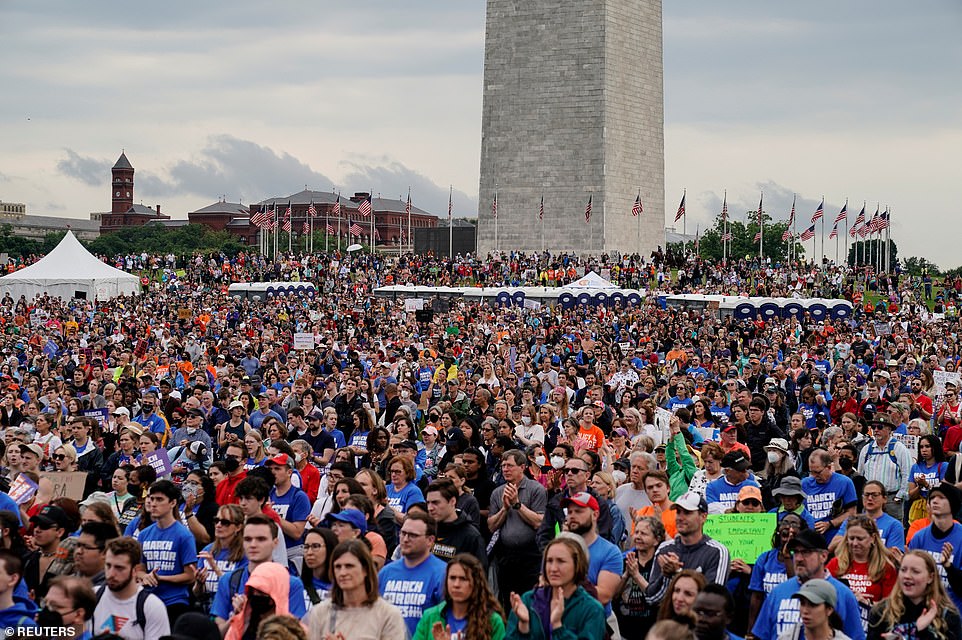 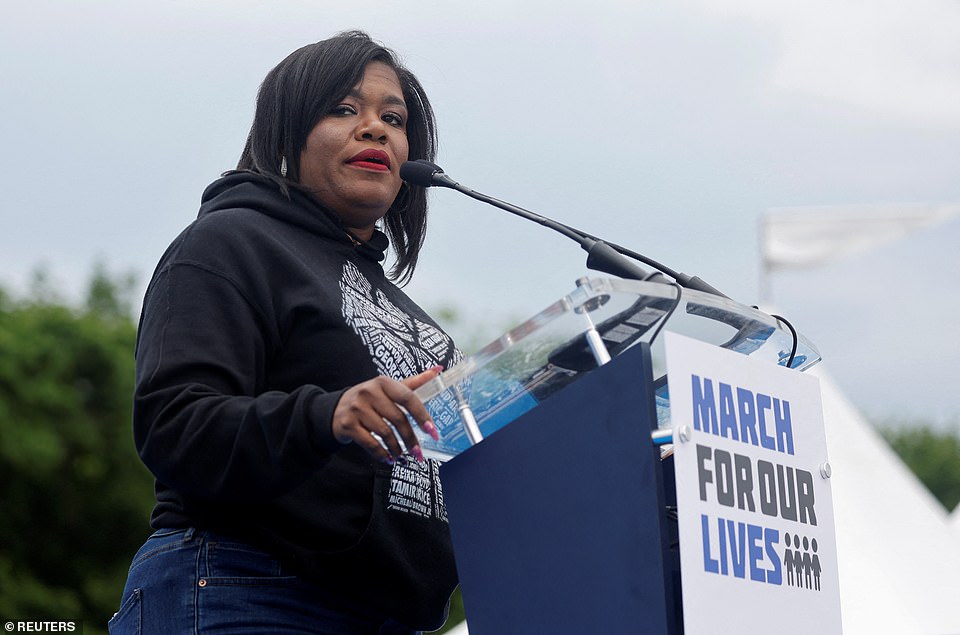 Frequent mass shootings lead to widespread outrage in the United States, where a majority of people support tighter gun laws, but opposition from many Republican lawmakers has long been a hurdle to major changes.

The Democrat-controlled House of Representatives passed a broad package of proposals this week that included raising the purchasing age for most semi-automatic rifles from 18 to 21, but the party does not have the requisite 60 votes to advance it in the Senate.

A cross-party group of senators has also been working on a narrow collection of controls that could develop into the first serious attempt at gun regulation reform in decades.

But it does not include an assault weapons ban or universal background checks, meaning it will fall short of the expectations of President Joe Biden, progressive Democrats and anti-gun violence activists. 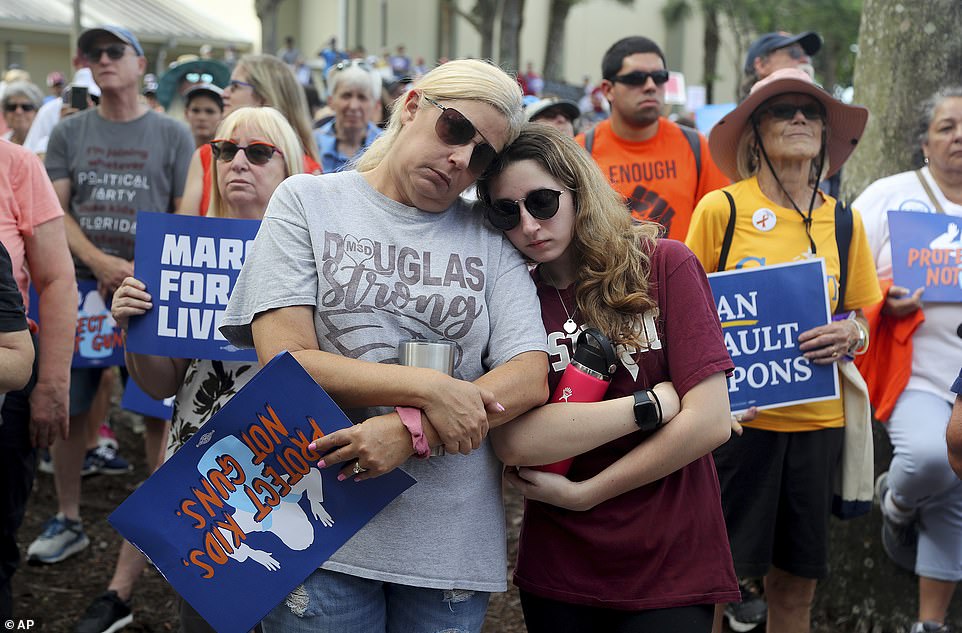 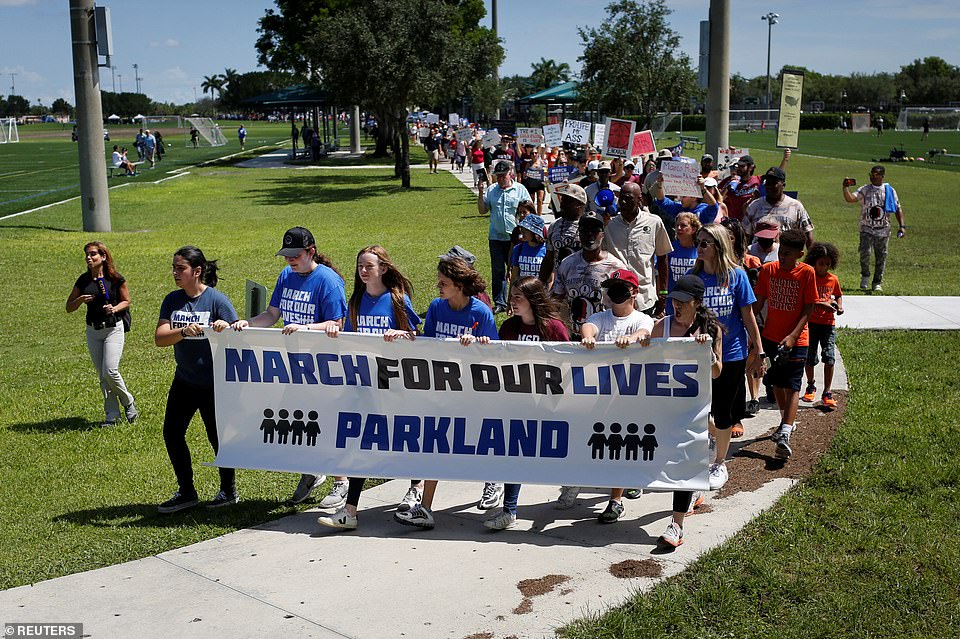 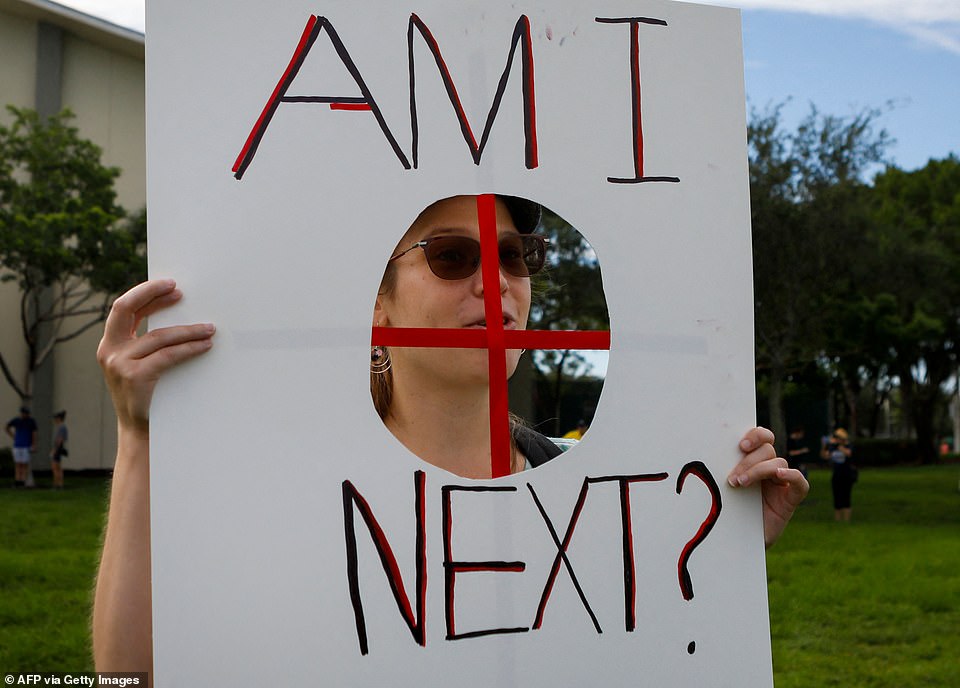 A person hold a target sign, reading: ‘Am I next?’ in Parkland, Florida during the protests 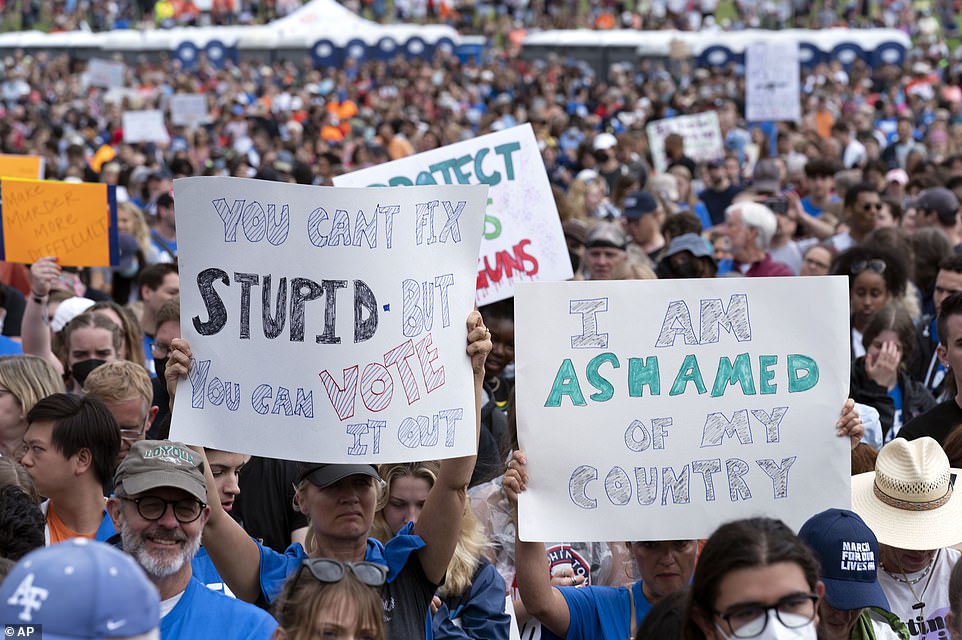 Thousands stand with signs in the Florida heat. Damning signs read: ‘You can’t fix stupid, but you can vote it out’ and ‘I am ashamed of my country’