An animal shelter in California has announced they will not allow people to adopt pets if they do not support gun control in the wake of a series of mass shootings that have wreaked havoc across the US.

The Shelter Hope Pet Shop in the city of Thousand Oaks said they have added the question ‘where do you stand on gun control’ to their adoption interview for those looking to adopt a pet.

Kim Sill, the owner of the pet shelter, said that if a person is a NRA supporter and believes there should be no background check for guns, they will be banned from adopting a pet.

‘If you lie about being a NRA supporter, make no mistake, we will sue you for fraud,’ Sill said in a statement.

‘If you believe that it is our responsibility to protect ourselves in public places and arm ourselves with a gun – do not come to us to adopt a dog. We have a choice of who we work with.’

Sill said she had decided to introduce the policy after the elementary school gun massacre in Uvalde, Texas, that left 19 children and two teachers dead. 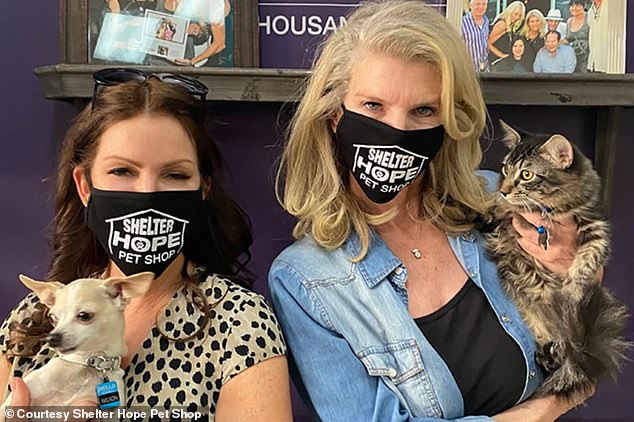 Kim Sill (right), the owner of the pet shelter, said that if a person is a NRA supporter and believes there should be no background check for guns, they will be banned from adopting a pet 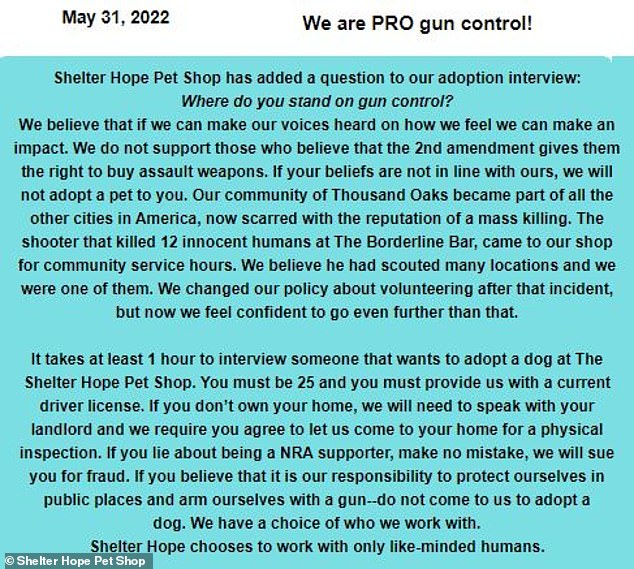 She added: ‘We do not support those who believe that the 2nd amendment gives them the right to buy assault weapons. If your beliefs are not in line with ours, we will not adopt a pet to you.’

Sill, the founder of the pet shelter, pointed to how people in the city of Thousand Oaks experienced a mass shooting in 2018 when a 28-year-old Marine Corps veteran killed at least 12 people at the Borderline Bar.

Sill said the shooter had come to their shop for community service hours.

‘We believe he had scouted many locations and we were one of them,’ Sill said. ‘We changed our policy about volunteering after that incident, but now we feel confident to go even further than that.’

Sill said that their new policy means that those who adopt a dog at the shelter must not only be 25 but also be pro gun control.

‘We will grill you before you even get an appointment and visit our rescue. If we ask you ‘do you care about children being gunned down in our schools?’

‘If you hesitate, because your core belief is that you believe teachers need to carry firearms, then you will not get approved to adopt from us.’

Sill added: ‘Shelter Hope Pet Shop in no way will continue to operate if we are even remotely part of the problem. We support teachers, children, and businesses who provide services to the public, but we’ve had enough of all the senseless killing.’ 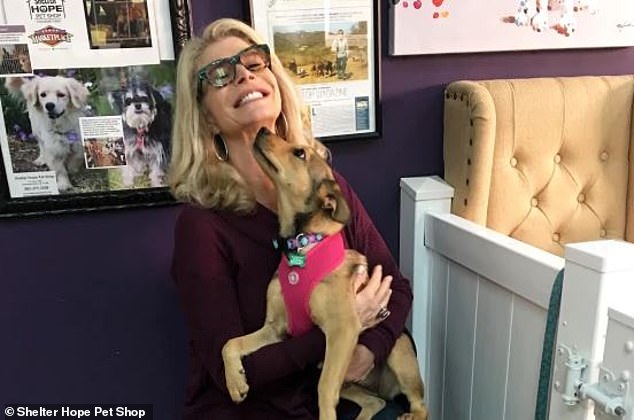 Sill told NBC News that some of the shelter’s donors are Republicans and a few have threatened to cut off the funds if she doesn’t remove the new interview question on gun control.

Responding to Sill’s updated policy, NRA spokeswoman Amy Hunter told the news outlet: ‘Having this asinine political litmus test comes at the expense of needy and homeless dogs and cats.’

There is increasing demand for gun control laws in the US in the wake of a series of mass shootings.

On Sunday, a bipartisan group of senators announced they have come to an agreement on a framework for gun control legislation.

President Joe Biden said that he will sign the framework as soon as it comes to his desk.

The deal would incentivize ‘red flag’ laws but would not include provisions championed by Democrats up to Biden himself, like increasing the age to purchase certain rifles to 21 or a ban on assault weapons. 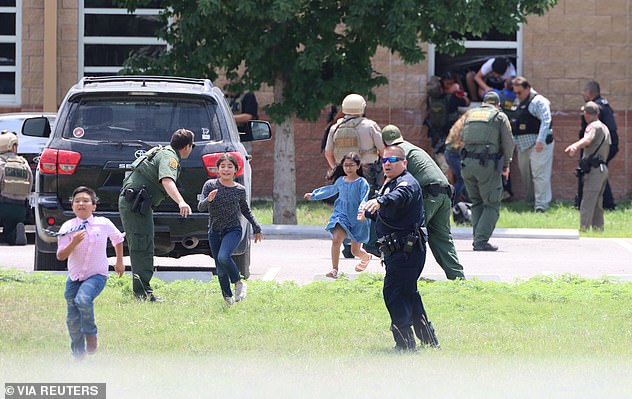 Children run to safety after escaping from a window during a mass shooting at Robb Elementary School where a gunman killed 19 children and two teachers in Uvalde, Texas, on May 24

‘I continue to believe military-style assault weapons that can shred the bodies of their victims have no place in civilian use—but we cannot let the perfect Congressional response be the enemy of the good,’ Senate Majority Whip Dick Durbin wrote on Twitter Sunday.

‘Though this agreement falls short in this and other respects, it can and will make our nation safer.’

‘I support these bipartisan measures that would begin to curb gun violence in America. I hope my colleagues on both sides of the aisle will find a way to make these changes and provide these resources. We need to continue our efforts to pass common sense gun safety laws,’ Booker wrote on Twitter.

David Hogg, a gun control activist and survivor of the Parkland, Florida school shooting praised the legislation as a ‘first step.’

While the deal is substantially less than the House bills passed last week and is weaker than what Democrats want, it does provide the framework for the most significant federal gun restrictions in nearly three decades.

Core lawmakers behind the Senate deal are Democratic Senators Chris Murphy of Connecticut and Kysten Sinema of Arizona, as well as Republican Senators John Cornyn of Texas and Thom Tillis of North Carolina.

The four individuals are still working on writing and finalizing the legislative text, but are confident it will have the support of at least 60 senators, which is the threshold needed for legislation to pass in the upper chamber.

Senate Majority Leader Chuck Schumer called the legislation ‘a good first step to ending the persistent inaction to the gun violence epidemic that has plagued our country and terrorized our children for far too long.’

‘Once the text of this agreement is finalized, I will put this bill on the floor as soon as possible so that the Senate can act quickly to advance gun-safety legislation,’ he added.

One of the most potentially restrictive aspects of the tentative deal would establish a federal grant program to encourage the creation of ‘red flag’ laws, which would allow authorities to prevent people from buying guns who are deemed by a judge to be a threat to themselves or others.

It would also require for the first time that federal criminal background checks for those seeking to buy a gun under the age of 21 include a search of their juvenile justice records, according to the Sunday Post report.

What the compromise does not include, however, is a provision pushed by Democrats and President Joe Biden that would raise the minimum age to purchase certain rifles from 18 to 21 – while it is already federal law that individuals must be 21 to purchase a handgun.

Some of the worst school shootings since Columbine

May 18, 2019: A 17-year-old boy with his father’s shotgun and pistol opened fire inside an art classroom, killing nine students and a teacher and wounding 13 others

January 23, 2018: A 15-year-old boy with a handgun opened fire in the school, killing two 15-year-old students and injuring 14 more people

December 7, 2017: A 21-year-old man with a Glock 9mm semiautomatic handgun killed two students and opened fire on other students before committing suicide

April 10, 2017: A 53-year-old man opened fire in a classroom of his estranged wife, killing her and a student whilst also injuring another child

December 14, 2012: A 20-year-old man with a Bushmaster XM15-E2S semiautomatic rifle went on a gun rampage in the school, killing 20 children and six staff members and injuring two people

April 20, 1999: Two boys fired at fellow students and staff in the school, killing 13 people and injuring 21