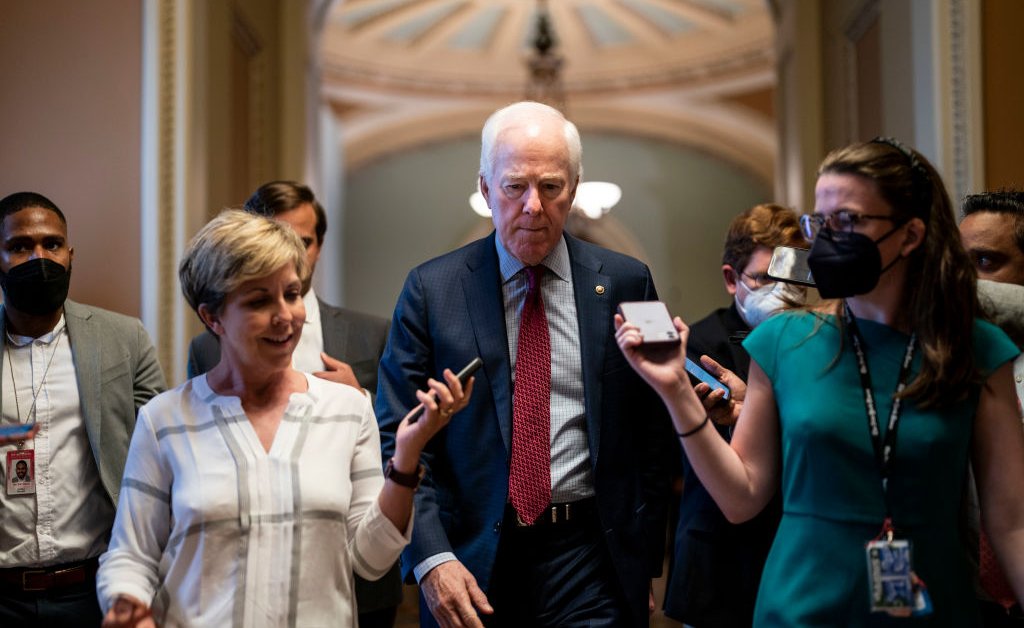 A lot of Washington took a break from their Sunday plans to at least glance at the breaking-news alerts reporting that negotiators in the Senate had seemingly reached a bipartisan deal to combat gun violence. The savvy ones read between the lines—or, in some cases, what aides were saying explicitly—and understood that the first significant change to gun laws since the 1994 crime bill wasn’t going to be anything approximating smooth.

In the wake of the latest mass shootings, even the most skeptical observers of gun politics in this country felt something might be different this time. A grocery store shooting in Buffalo, N.Y., left 10 dead and three injured, allegedly in an attack targeting Black residents at the hands of a white nationalist on May 14. Ten days later, another mass shooting left 19 students and two teachers dead in Uvalde, Texas. By Sunday evening of this week, activists and policy aides were circulating broad documents about what was coming—and what was not—as lawmakers and their aides struck an ambitious informal deadline of passing this before the July 4 holiday recess.

The group of 20 lawmakers announced they had reached a compromise package that linked modest restrictions on guns with unspecified spending on mental health services and school safety. In exchange, negotiators dropped Democratic desires for universal background checks, a raised minimum age to purchase some weapons, and a ban on assault rifles. No one admittedly loves the result, but as President Joe Biden says often, it’s better to judge an outcome based not on the Almighty but on the alternative, and in this case, that means more years of nothing.

Biden said he was looking forward to signing the deal. That, however, assumes a level of optimism that runs counter to fact and goodwill that remains in as short supply as ever.

The tentative agreement lacks any legislative text, meaning the framework for the bill is still pliable and fragile. A lot can go wrong during a drafting process that could stretch weeks. And while 10 Republicans signed the press release about the deal, there is a long history of even modest bipartisan changes collapsing once the GOP base is activated.

Lest anyone in either camp starts celebrating, Senate Minority Leader Mitch McConnell’s statement said he supported the effort, but stopped well short of saying he would back the end result. “I continue to hope their discussions yield a bipartisan product that makes significant headway on key issues like mental health and school safety, respects the Second Amendment, earns broad support in the Senate, and makes a difference for our country,” McConnell said.

And among Democrats, there are plenty of grumbles about the scope of the compromise. While House Speaker Nancy Pelosi, Senate Majority Leader Chuck Schumer and Biden have all said they want to bring the eventual result passed into law, the margins are hellishly small for the Democrats. Because of seven vacancies, they can only afford to lose five votes in the House, meaning even the smallest quiver puts the whole effort in peril.

And with an evenly divided 50-50 Senate, the chamber still needs 10 Republicans to work across the aisle to help almost every piece of legislation clear the 60-vote threshold to start voting.

While the tentative agreement commits to spending “billions” on school safety and a national network of mental health clinics, the exact funding number is still unknown. Other money, as agreed to on Sunday, will be available for states to implement their own programs to temporarily take away guns from an individual who may pose be a risk—a non-starter in a lot of the country states, much as Obamacare’s Medicare expansion is still absent in 12 states. In other words, states that already have limits on guns can tighten things up while states that embrace their firearm culture more aggressively can shrug a lot of these changes off.

As for background checks beyond gun stores—such as private sales or gun shows—they would remain a mixed bag. Under the proposal, some private sellers would have to start participating in background checks, while others may yet dodge. As it stands, universal check will likely be something to again reconsider when the next mass shootings force Washington to the table. (It’s not like the FBI can even keep up with its current background check log.)

Finally, the rosy hopes assume the negotiators themselves fully understand what they have drawn up, and have faith that unhappy constituents won’t punish them too harshly. A top McConnell whisperer, Sen. John Cornyn of Texas, joined the talks on the Republican side, and he’s about as attuned to the party’s sentiments as they come, so it’s a good bet the framework doesn’t go too far—at least at the moment. Sen. Thom Tillis of North Carolina, who is retiring at the end of this term and will be happy to leave Washington behind, led the GOP back-and-forth with the lead Democratic negotiator, Sen. Chris Murphy of Connecticut.

In fact, none of the 10 Republicans backing the framework will face voters this fall. Four are leaving Congress when this term ends, and another five aren’t up for re-election for at least four more years. Sen. Mitt Romney of Utah is the only lawmaker who backed the deal who will be on the ballot in 2024.

That space gave Republicans some insulation from the inevitable heat that is on deck from fellow lawmakers—and their allies and lobbyists—who see any erosion of gun rights as unacceptable. While the NRA is not as powerful as it once was, the gun industry’s favorite vehicle or its allies can still complicate GOP primaries with plenty of its ferocity. If an outside group wants to rile up the GOP base, guns are a pretty good bet.

Washington seemingly loves to have this debate over guns. In a country that has more guns than people, it’s clearly a resonant issue. After every one of these mass shootings, there’s a call for more protections for bystanders, especially children. Very little changes, though, and the reason is simple: it’s risky.

While the Republicans involved won’t have to face voters soon, it’s a different story for Democrats. Two will answer to voters this year: Sen. Richard Blumenthal of Connecticut and Sen. Mark Kelly of Arizona. Democrats seldom punish their own for wavering on Second Amendment rights, especially when it’s personal. Blumenthal represents a state that saw 20 students and six teachers fatally shot in Newtown, Conn., and Kelly’s wife, former Rep. Gabby Giffords, survived an assassination attempt. For them, the risk with voters would be inaction, and until that’s the case with more lawmakers, half-measures might be as good as Washington can muster.

Write to Philip Elliott at philip.elliott@time.com.