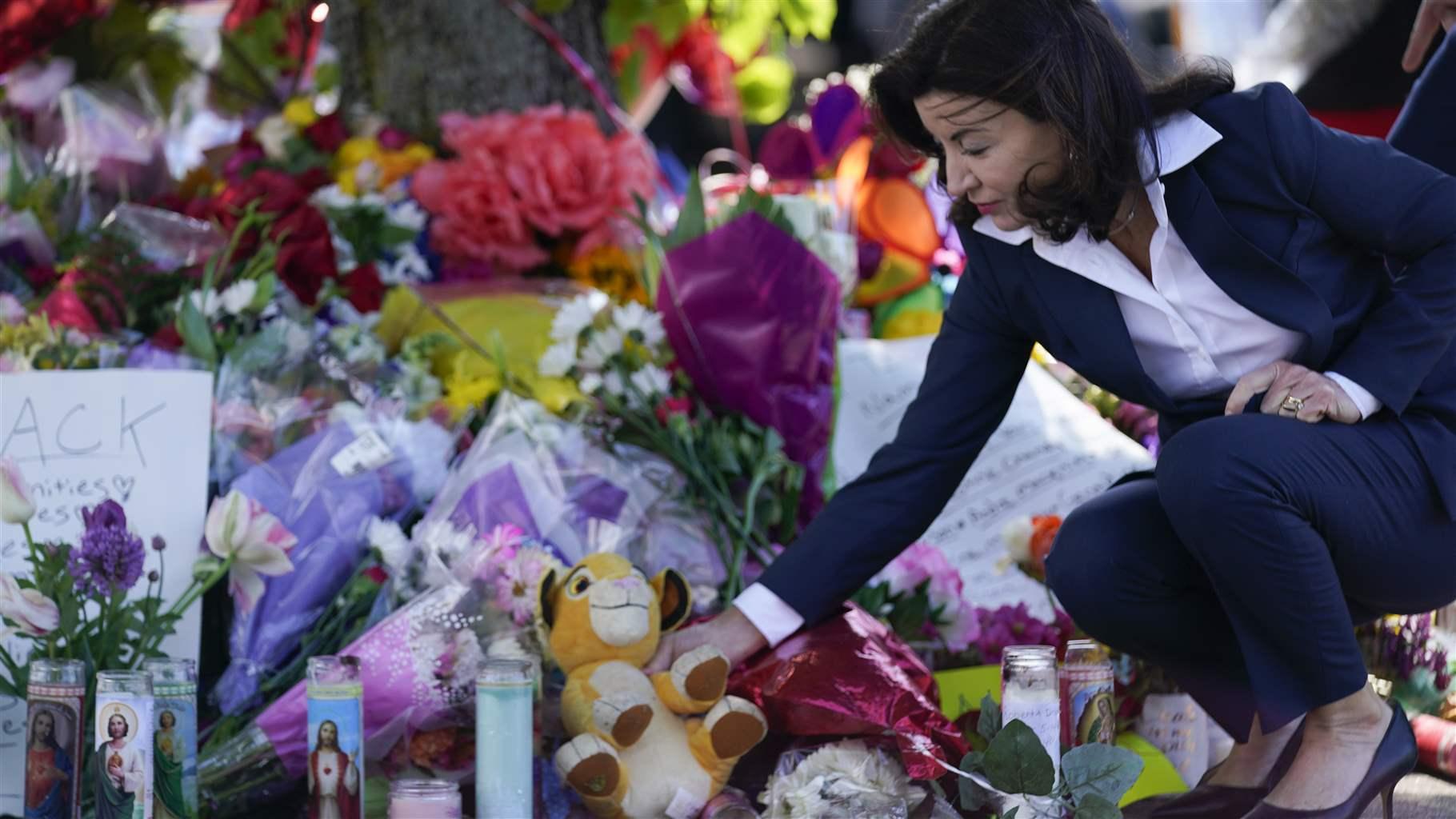 Many people have noted a common thread between the recent mass shootings in Buffalo, New York, and Uvalde, Texas: In both cases, the attackers were 18 years old and bought AR-style, semi-automatic rifles legally.

The perpetrators in two other mass shootings in the past four years also were younger than 21 when they purchased the semi-automatic rifles they used in their attacks. In February 2018, a 19-year-old former student killed 17 people and injured 17 others at Marjory Stoneman Douglas High School in Parkland, Florida. And in April 2021, a 19-year-old shooter killed eight people and injured seven at a FedEx warehouse in Indianapolis.

Under federal law, you must be 21 to buy a handgun from a licensed dealer. But to purchase long guns such as shotguns, rifles and semi-automatic rifles, the federal minimum age is 18.

But of those three, only New Jersey appears likely to enact a law in the near future, though Democrats in the Garden State remain cautious about the bill’s chances.

And such laws might be vulnerable to court challenges. Last month, a U.S. appeals court in California struck down that state’s blanket ban on the sale of semi-automatic rifles to adults under 21, ruling that it violated the Second Amendment. California, which is expected to appeal the decision, still has a ban on long-gun purchases for adults under 21, with exemptions for hunters or those in law enforcement or the military.

“America would not exist without the heroism of the young adults who fought and died in our revolutionary army,” Judge Ryan Nelson wrote in the decision striking down California’s blanket ban. “Today we reaffirm that our Constitution still protects the right that enabled their sacrifice: the right of young adults to keep and bear arms.”

Red Flag Laws Are Saving Lives. They Could Save More.


Meanwhile, the prospect of federal legislation to raise the minimum age to purchase semi-automatic rifles is dim. The agreement struck over the weekend by a bipartisan group of U.S. senators does not include such a measure.

Despite the challenges, state Democratic lawmakers across the country are increasingly interested in raising the minimum age for gun purchases, according to Nico Bocour, the government affairs director of the Giffords Law Center, a gun safety organization founded by former U.S. Rep. Gabby Giffords, the Arizona Democrat who survived an assassination attempt in 2011.

Bocour, who serves as the group’s liaison to state lawmakers, described barring teenagers from buying any gun as a “straightforward, commonsense policy” that could gain traction in statehouses. It’s also broadly popular, supported by three-fourths of Americans, according to a June survey conducted by Quinnipiac University.

“As folks try to avoid policies that they feel are nonstarters with the gun lobby with what they consider incremental, things like age limits are put on the table more often than they used to be,” she said.

To bolster their case, Bocour and other supporters of such laws point to brain research.

The part of the brain that controls key cognitive behaviors—the prefrontal cortex—continues to develop until people are 26, putting young adults at higher risk of being impulsive without fully understanding the consequences, said Cassandra Crifasi, an associate professor at Johns Hopkins University Bloomberg School of Public Health.

While more research is needed to fully grasp the link between age and gun violence, Crifasi acknowledged, studies do show that there is a heightened risk of gun violence for those under 21.

While 4% of the U.S. population is between 18 and 20, that age group makes up 17% of homicide offenders, according to an analysis of FBI data by the Giffords Law Center.

“It’s important to remember that behind these numbers it’s actually people and communities and families that are forever changed because someone chose to use a firearm to harm others,” said Crifasi, who is a gun owner and lifelong competitive shooter.


As a practicing emergency physician in Providence, Rhode Island, Dr. Megan Ranney has treated many young men in their late teens and early 20s for gunshot wounds—some injuries shaking her to her core. It’s a high-risk group, she said, and lawmakers should be working to protect them and the community around them from gun violence.

“I have taken care of far too many patients,” said Ranney, who also serves as academic dean at the School of Public Health at Brown University. “Taking care of gunshot wounds is unfortunately part of my bread and butter. For too long, we’ve accepted this as something we had to do. But we can prevent this.”

New York state Sen. Anna Kaplan, a Democrat who co-sponsored the age legislation in her state, said raising the age to purchase semi-automatic rifles won’t prevent every mass shooting, but it’s a necessary step for public safety. If you have to be 21 to buy alcohol or tobacco in New York, you also should be at least that old to buy firearms, Kaplan said.

“You should be at a certain point in your life to be able to make those right decisions,” she said. “Owning a gun is a very, very big responsibility and it’s not just a responsibility that impacts you, the individual. It could have consequences and impact your family, your friends and your community, and it can’t be taken lightly.”

Buying a semi-automatic rifle in New York now will require a permit that will be available only to people 21 or older. The gun bills Hochul signed also will tighten the state’s so-called red flag law, ban high-capacity magazines and prohibit the purchase of bulletproof vests unless the buyer is in law enforcement or in the military.

The measures passed along party lines. Republican lawmakers argued the package was rushed, poorly crafted and unconstitutional, opening the state to legal challenges instead of addressing the root causes of violence and crime, such as mental illness.


“This is virtue signaling,” said Republican state Sen. George Borrello. “The reason we have a Second Amendment is pretty simple: It’s so that people have the right to self-defense and that they have the right to defend themselves against a tyrannical government.”

States often tighten gun laws after a mass shooting. After the Parkland school shooting in 2018, a bipartisan group of Florida lawmakers passed a large package of gun restrictions, school protections and mental health investments that included a measure that raised the age to buy firearms to 21.

Public outrage, the activism of the high school students who survived the mass shooting and the fact that lawmakers were still in session all contributed to the success of that effort, Bocour said. Then-Republican Gov. Rick Scott, now a U.S. senator, signed the package into law.

Following the massacres in Buffalo and Uvalde, New Jersey Gov. Phil Murphy, a Democrat, called on state lawmakers to pass a sweeping package of gun restrictions. One of the bills would raise the minimum age for purchasing long-barreled guns to 21.

But passing these bills will be difficult, said Democratic state Sen. Joseph Cryan, who is co-sponsoring the age limit bill. Still, it’s worth the fight, he said. As a former sheriff, he has witnessed gun violence.

“I’ve watched people bleed out,” he said. “I’ve been at homicide scenes. I’ve listened to family members scream, wail and despair when they heard about the victim of gun violence … you can’t fix everything, but you do all you can do.”

Opponents such as Joseph Greenlee, director of constitutional studies at the Firearms Policy Coalition, which led the lawsuit against the California law, said age requirements are discriminatory. Greenlee said it defies logic to allow 18-year-olds to vote and serve in the military but not allow them to own a gun so they can protect their families.

“It’s frustrating,” he said. “It’s like a collective punishment for the behavior of a small group.”

Gun ownership activists are confident age restrictions will continue to fail in the court system. Aidan Johnston, director of federal affairs for Gun Owners of America, a gun rights organization, hopes the U.S. Supreme Court takes up the issue in the coming years. The case is clear, he said: “We shouldn’t punish law-abiding adults for the sins of a few deranged killers.”

But California Democratic state Sen. Anthony Portantino, who sponsored the age requirement law struck down last month, told Stateline he thinks his state is on “pretty solid ground” to win on appeal.

Last June, a federal judge upheld Florida’s law that prevents people under 21 from purchasing long guns. The National Rifle Association appealed the ruling, which is now before a three-judge federal appellate court in Atlanta. The NRA did not respond to a request for comment.

Utah state Sen. Derek Kitchen, a Democrat who plans on introducing an age restriction bill the next time the state legislature meets in Salt Lake City, said there must be guardrails in place to protect the public from mass shootings. His constituents have been calling him to demand action, he said, though he admitted it will be challenging to pass the measure.

“Our children are dying,” he said. “This isn’t freedom. This isn’t the liberty that we think of when we think of the United States. We are failing our children. We cannot wait any longer.”