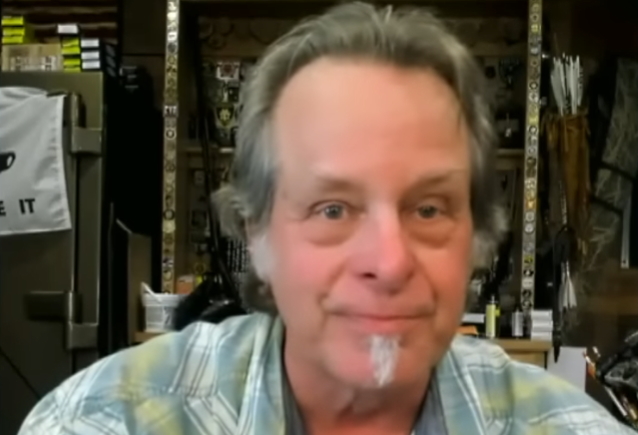 Ted Nugent says that there is a “proven” way to stop mass shootings at schools.

The 73-year-old conservative rocker, who recently resigned from the board of the National Rifle Association (NRA) after 26 years, weighed in on how to approach the issue of school safety in an interview last Friday (June 10) with Eric Bolling, the host of Newsmax‘s “Eric Bolling The Balance”.

“Well, when we’ve got this freak in the White House and we’ve got a culture of depravity running amok in this country, we’re gonna have to go all the way back for quality control ’cause right now we’re maniacally scrambling for damage control,” he said (as transcribed by BLABBERMOUTH.NET). “And the quality control can be summarized by how my dad raised us: discipline, accountability, true north, responsibility, being the best that you can be. That parenting guideline still exists in this country, but in all these instances where these creeps have turned into violent, evil criminals, all those elements for a proper upbringing have been missing. Now you start adding the celebration of teaching kindergarteners about oral sex and that transgenderism is more normal than heterosexuality.

“We are literally in a whirlwind of cultural abandonment, moral abandonment, parental abandonment,” he continued. “And only the guilty need to feel guilty ’cause everybody in my life, they’re all good parents, they’re all good kids. We don’t have any criminals, we don’t have any violent people in our life, in my band, in my crew, my neighbors — everybody in my life are good, conscientious, caring, lawful people. But if you really wanna start, in this current cluster that we’re in right now, secure the damn schools. And this isn’t a guitar player’s hunch — it’s been proven. One point of entrance, all other entries locked. Have a real commando — I mean, a real tuned-in guy that’s trained in tactics and firepower and criminality, and have him looking for trouble. Not kind of casually walking around Parkland and maybe he’ll run into trouble — have a commando that values those children’s lives and have this commando, well-trained tactical capable individual looking for trouble and stopping it before it gets there.

“The great sheriff in Lee County, Florida, Carmine Marceno, he’s got the parameter secured in his schools,” Ted added. “My great sheriff here in McLennan County, Texas, Parnell McNamara, nobody’s gonna get anywhere near a school if they look suspicious. We’re gonna look for trouble and stop it before it can have access to innocent lives.

“This is not mysterious; the jury is not still out. This is a proven methodology. But the Democrats vetoed legislation that would have enacted these proven safety measures.”

Ted made his comments in the wake of last month’s mass shooting in a Uvalde, Texas elementary school which resulted in the deaths of at least 19 children and two adults.

One day after the shooting in Uvalde, Sen. Ron Johnson (R-Wis.) pushed for the Luke and Alex School Safety Act to be passed via unanimous consent. The legislation — named after Luke Hoyer and Alex Schachter, who were both killed in a 2018 school shooting in Parkland, Florida — would require the Department of Homeland Security to establish a “Federal Clearinghouse on School Safety Best Practice” web site. The clearinghouse site would provide parents, school officials and law enforcement with tips for improving school security as well as information on available grant programs and federal resources but would authorize no new money to allow schools to improve security.

“We are going to vote on gun legislation,” he said. “The American people are tired of moments of silence, tired of the kind words offering thoughts and prayers.”

The Uvalde massacre came only 10 days after an 18-year-old gunman in body armor killed 10 shoppers and workers at a supermarket in a predominantly black area of Buffalo, New York.

According to CNN, the number of U.S. deaths from gun violence in 2019 was about 4 per 100,000 people. That’s 18 times the average rate in other developed countries. Multiple studies show access to guns contributes to higher firearm-related homicide rates.

In March 2021, Nugent threatened President Joe Biden and other Democrats, telling them to “come and take it” just hours before the House of Representatives passed two gun-safety bills.

In a March 11, 2021 Facebook post, Nugent addressed Biden and “all you other oath violating traitors,” writing, “Google my address and itinerary and Come and Take It!” He also proclaimed, “If you want to play Concorde bridge again, you will be the British and I will be the Americans, again.”

Last August, Nugent defended his right to bear arms under the Second Amendment, arguing that he “got it from God.” The musician discussed his natural-born rights as an American while talking to Tucker Carlson for the newest episode of Fox Nation‘s “Tucker Carlson Today”.

“Kings, emperors, tyrants, kiss my ass,” he continued. “We are a self-government. We are in charge, we hire people to represent us based on these self-evident truths. And if you infringe on them, we will fire your ass and don’t make us arrest you.”

Nugent went on to say that the purpose of the Second Amendment is to protect the nation from tyranny.

“[The Second Amendment] says any rights here that are not numerated are up to the states. It’s here and enumerated,” he said. “It’s written down, I can keep bear arms in America, in every building, on every street corner, wherever I want. I got it from God. The Founding Fathers just happened to write it down in case somebody wanted to play king.”

In a July 29, 2021 e-mail from NRA general counsel John Frazer sent to board members, it was announced that Nugent, who joined the board in 1995, was stepping down “due to ongoing schedule conflicts.”

Ted‘s decision to leave the board came less than a year after he told Newsmax‘s “The Chris Salcedo Show” that the National Rifle Association was “he most important civil rights organization in the world.”