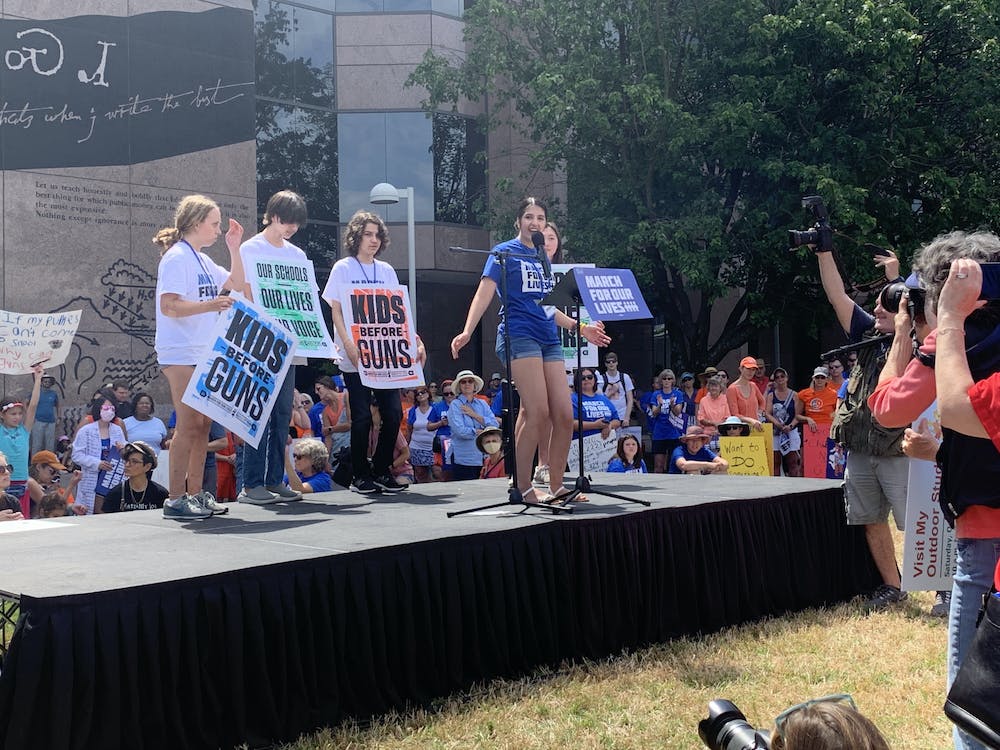 Gun control activists gathered across the country Saturday in the wake of the Robb Elementary School shooting in Uvalde, Tex. that killed 19 children and two teachers. In Raleigh, the March for Our Lives event saw hundreds of North Carolinians rally in front of the State Capitol building to send lawmakers a clear message: “Enough is enough.”

There was a mixed sense of urgency and exhaustion at the rally. Some people brought signs that they made after the Marjory Stoneman Douglas High School shooting over four years ago—the survivors of which started the March for Our Lives movement.

The day began with speeches from several of the state’s youth activists, some of whom were still in high school.

Laura McDow, a Carolina Friends School student and a March for Our Lives co-organizer, missed some of her high school graduation events to attend the rally “because some students are missing the rest of their lives,” she said, addressing the crowd.

McDow spoke to her experiences as part of the “lockdown generation.”

“I didn’t just figuratively survive high school. I literally made it through alive. And that’s something many Americans can’t say,” McDow said.

She expressed frustration at what she sees as politicians’ inaction on passing safer gun control laws, instead “[turning] their backs on the hundreds of Americans killed every day.”

“Too much time has passed. Too many lives have been lost. You are either with us trying to save lives, or you’re out of a job,” she added, addressing supporters of gun ownership. “See you in November.”

Many of the March for Our Lives attendees were also parents advocating for a safer future for their school-aged children. Brian Eichner and Melissa Yanek-Eichner arrived at Raleigh with their son and daughter, aged 8 and 10. The children toted homemade signs reading “Ban Guns from School!” and, “If my puppies can’t come to school, why can guns?”

Eichner, a pediatrician, said that his profession and his own experience as a parent motivated him to participate in the rally.

“There’s a lot that we can do if we’re going to look them in the eye and tell them that we’re keeping them safe,” he said.

When asked about her thoughts on the upholding of the Second Amendment, Yanek-Eichner said her children’s right to safety “definitely trumps anything that [gun owners] think that they need.”

District 36 Representative Julie von Haefen empathized with Yanek-Eichner’s concerns as a mother of three herself. She shared that her work as a substitute teacher further opened her eyes to the effects of gun violence within her own community.

“A lot of these kids that I’ve been teaching have grown up with school shootings being just part of their daily lives and their daily knowledge of the world,” von Haefen said. “And I think in a district like mine, a suburban district, there’s a lot of families with kids in school. It’s something that parents and kids think about all the time.”

Von Haefen was one of several political leaders at the rally. She was joined by Durham County Commissioner Nida Allam and Gerald Givens, president of the Raleigh-Apex National Association for the Advancement of Colored People, both of whom shared personal experiences of losing friends and family to gun violence.

March for Our Lives co-organizer Leah Krevat and her mother, Madhavi Krevat, the Moms Demand Action state campaigns lead, shared their experiences with organizing across generations. Leah performed her song “#Enough” on the front stage, her lyrics conveying frustration of living under the daily fear of gun violence. Madhavi manned the MDA booth.

Leah recalled a “terrifying” experience during middle school when she and her classmates mistook a lockdown drill for an emergency lockdown. In her junior year alone, she experienced six threats of violence against her school. And three years ago, Leah’s brother was kept in a four-hour lockdown during the 2019 University of North Carolina at Charlotte shooting that killed two and wounded four.

Madhavi referred to the evolution of American gun culture as the “romanticizing of the gun.” She noted that the National Rifle Association before the Heller v. District of Columbia ruling was a gun safety organization, contrary to its current reputation as a gun rights advocacy group.

“It’s that romantic notion of the Wild Wild West and protecting your own with a gun at your hip, and that’s what the NRA is pushing,” she said. “It’s not Tombstone, Arizona. This is 21st century America.”

The message of the day across all the speakers was clear: vote against politicians who push pro-gun legislation.

Still, Mark Jewell, a fifth grade educator from Greensboro and the former president of the North Carolina Association of Educators, remarked that preventing gun violence should not be considered a partisan issue.

“This really isn’t about politics. This is about doing what is the right thing for all of our students, all of our families and all our communities whose lives have been destroyed by gun violence,” Jewell said. “We need to move past their party lines and our ideological arguments. Our shared humanity should be enough to unite this country now to do something.”

Get The Chronicle straight to your inbox

Signup for our weekly newsletter. Cancel at any time.

Audrey Wang is a Trinity sophomore and a university news editor of The Chronicle’s 118th volume.

Sevana Wenn is a Trinity sophomore and features managing editor of The Chronicle’s 118th volume.