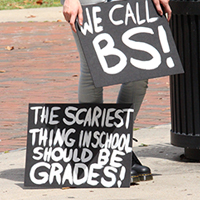 Last Saturday morning, residents of more than 400 cities nationwide poured into their hometown streets, holding signs and calling for commonsense gun reform. Thanks to local activists, Pensacola was no exception.

Plaza Ferdinand was filled with dozens of protesters participating in a rally that was organized as part of the March for Our Lives (MFOL) movement.

MFOL is a Florida-grown movement started by survivors of the 2018 Parkland shooting. Two days before the event, march co-organizer Alby Clendennin spoke with Inweekly and described how he felt after hearing of the recent tragedies in Uvalde, Texas, and Buffalo, N.Y.

“The news just completely destroyed me. I absolutely broke down into tears thinking about it all. It’s too much, and it’s a failure of our society,” Clendennin said.

Clendennin is a UWF senior and the son of an elementary school teacher. He and his co-organizer, local mental health professional Taran Black, are heavily involved with local activism, and both of them wanted onlookers to know that the goal of MFOL was generating dialogue, not taking away citizens’ guns.

“Today’s event was about fostering further conversation—a conversation that does not dismiss one party or a particular set of people,” Black told Inweekly after the march. “It’s not about taking away Second Amendment rights. In fact, I am licensed to concealed carry, so I don’t want anybody taking away my guns. However, I would like to see commonsense gun reform.”

Clendennin echoed this sentiment during his interview with Inweekly, saying, “I think that what’s so incredibly important is having the conversation in the first place, and that’s what the march is trying to do—just start the conversation and talk about how we can do better for ourselves and our community.”

On Saturday, June 11, in Plaza Ferdinand, local parents, grandparents, educators and students came together and did just that. The event opened with an organizer reading the names of all 19 children and teachers killed in the Uvalde, Texas, shooting, as a group of local teenagers stood in a line at the front of the crowd and held up pictures of each victim, one by one.

A series of community members then took the stage, including veteran teachers, longtime gun reform activists, a local high school student and a survivor of gun violence. Every speaker urged attendees to do one thing, and their call to action turned into a mantra the crowd would chant all morning—“Vote them out.”

“Today, we marched to send a message,” said community activist Samantha Hope Herring in her speech. “But on election day, you march to the ballot box to get a resolution.”

In particular, the activists onstage called for voting out any state official who opposes universal background checks, red flag laws and restrictions on owning assault rifles.

“The power is not in a weapon; the power is in your vote,” Herring told Inweekly after the event. “You can be sure people like myself will be organizing, working hard to see that we get people registered to vote, so that people have a voice that represents them and not the NRA.”

Gun-owning attendees were also encouraged to practice gun safety at home by storing their ammunition and firearms in secure, locked locations inaccessible to kids.

In addition to these calls for action, speakers told the crowd poignant stories about the tangible effects of gun violence on schoolchildren.

“The worst part was, we began having mandatory monthly lockdown drills. This is where we must turn off all the lights, cover the windows, hide under desks and be totally silent, because we are literally telling our children how to avoid being killed in case a madman with a gun comes into my classroom. We have to train them on that now. When the lockdown drill is over, I am to pick up my schoolbooks and continue teaching, like this is just normal or acceptable,” Cleaver said.

“The drills scared my students at first,” she added. “In many cases, their daily lives are threatened by gun violence in their own neighborhoods. They take it seriously.”

Cleaver was not the only organizer concerned about local gun violence.

Event co-organizer Black was a student of Pensacola State College Professor Carla Williams and a friend of activist Durrell Palmer, and after the march, he shared with Inweekly how their lives and recent deaths affected him.
“Dr. Carla Williams would oftentimes encourage me to stay focused and humble,” he said. “She knew where I came from and just the challenges that I faced to even get to her college classroom. I will forever be grateful to Dr. Williams for her teaching, from an academic standpoint and a personal standpoint.”

“And just as I had, Mr. Durrell Palmer wanted to grow up to make a positive impact,” Black added. “To change the trajectory of individuals who grow up in impoverished backgrounds by educating them, by supporting them, by affording them opportunities to see a different light. Not only did he stand for Black Lives Matter; he stood for gun reform. He stood for better employment opportunities for individuals in the community. For him to lose his life surrounding a gun, gun violence, it definitely hurts my heart. To lose your life in that manner is just baffling.”

Once the speeches were finished, organizers led the still-chanting crowd in a march down Main Street and through the heart of downtown, ending where they began at Plaza Ferdinand. Afterward, many participants stayed behind and talked to the people they’d just marched with, discussing the cause that brought them together.

He spoke to Inweekly after the march, saying, “I feel like it’s important as a member of the LGBTQ community to be out here, because tomorrow [Sunday, June 12] is the sixth anniversary of the Pulse massacre. And as we know, this type of gun violence does affect everyone in the population, but there’s a large amount of marginalized populations that are overly affected, whether that’s race, sexual orientation or gender identity.”

“Regardless of how people feel about the second amendment, I think we should all agree that things are completely out of hand right now,” he added. “We do need commonsense gun laws. We do need background checks. It’s not fair for our kids to be going to school and having to skip recess because they’re learning how to hide under the table.”

During Clendennin’s pre-march interview with Inweekly, he said he felt “incredibly optimistic” about the movement’s chances of success this time around, especially considering the organization’s record of effectiveness.

“Back in 2018, March for Our Lives was able to pressure former Republican Governor Rick Scott to sign a bill that mandated you had to be over the age of 21 to buy a firearm in the state of Florida, and that’s a big deal, because honestly, our state legislature hadn’t done much for them in the past,” Clendennin said.

Neither he nor any of the speakers and community members we spoke to on Saturday knew it at the time, but the nationwide march they participated in inspired what could be historic progress. On Sunday, June 12, just one day after the march, a bipartisan group of 20 senators, half Republicans and half Democrats, announced their intention to push a commonsense gun reform bill through the Senate.

“If you are sick and tired of feeling sick and tired about what is happening throughout our country when it comes to gun violence, then come have the conversation with us about how we can do better for Pensacola,” Clendennin told Inweekly.

“It shouldn’t be easier to get a gun than it is to get quality housing or health care,” he added.