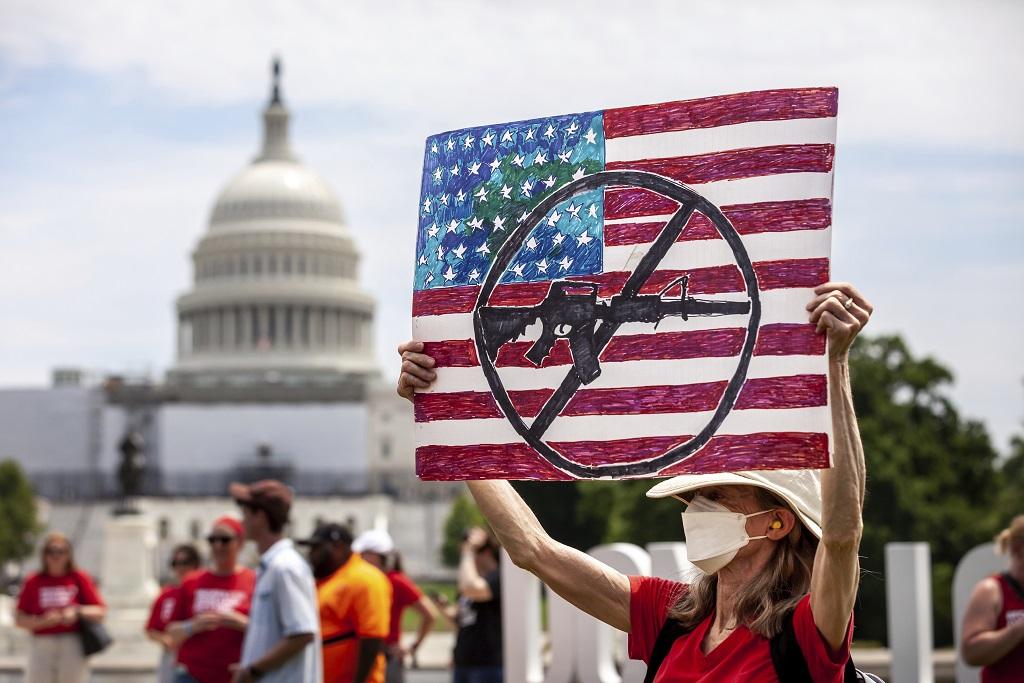 Since the 2012 Sandy Hook massacre, Congress has littered the American landscape with failed gun control measures. A decade later, after a supermarket rampage and another school massacre, a Senate coalition of ten Republicans and ten Democrats is either trapped in the legislative equivalent of “thoughts and prayers” or on the cusp of the first weak, but meaningful, gun control proposals since the 1994 assault weapons ban. Whether the Republicans can withstand the onslaught of the NRA and gun rights groups or wither in the face of the pressure will unfold in a very public way over the next ten days.

In his backhanded endorsement of the process Tuesday, Senate Minority Leader Mitch McConnell opined, “If this framework becomes the actual piece of legislation … it is a step forward on a bipartisan basis and further demonstrates to the American people that we can come together, which we have done from time to time on things like infrastructure and postal reform to make progress for the country.”

All told, the bipartisan group’s June 12 proposal could have a modest impact on mass shootings, particularly ones involving illegally obtained weapons. But it barely scratches the surface of really tackling gun proliferation.

THE AGREEMENT PROPOSES to clarify what it means to be a licensed firearms dealer under federal law. Although the framework aims to “crack down on criminals who illegally evade licensing requirements,” such as by means of straw purchases, it could potentially compel more gun dealers, especially private sellers who market large numbers of weapons through websites or at gun shows, to secure federal licenses. That would require these dealers to keep records, do background checks, and allow inspections by the Bureau of Alcohol, Tobacco, Firearms and Explosives (ATF).

But in a country where civilian handguns in circulation outnumber people, the ATF remains underfunded, understaffed, and director-less, thanks to the NRA and other gun rights groups. ATF does not have the resources to adequately administer background checks under current law: The bureau inspects fewer than 15 percent of existing dealers each year according to some estimates, and some gun dealers can go years without being inspected at all—which could tempt some people to stray into gray areas.

The framework might likely compel stiffer penalties for straw gun purchases (in other words, having one person obtain a gun for someone else who cannot legally get one). That might end up incarcerating more people, but will not necessarily dent gun trafficking.

The framework also proposes federal incentives for “state crisis intervention orders,” also known as “extreme risk protection orders” (ERPOs) or “red flag” laws. ERPOs, which provide a way for law enforcement officials, medical professionals, and families to invoke court orders to keep guns away from individuals deemed a threat to themselves or others, have been in force in several states since 1999, but proliferated after the 2018 Parkland massacre. Nineteen states, including Florida and the District of Columbia, currently have ERPO regimes.

The agreement reflects the GOP’s keen interest not only in mental-health “solutions” but school hardening and deploying more police and security officers to schools.

The agreement proposes financial incentives for establishing ERPO regimes, rather than a national framework (which appears to be a nonstarter for Second Amendment purists). There is concern that such a system might set up a red state/blue state dynamic not unlike the one that has evolved around Medicaid expansion. In this sense, the very states that could benefit from federal funding might reject it based on political point-scoring.

The focus on ERPOs is at its core a political maneuver that shifts attention from the ubiquity of guns to mental illness. Republicans may draw a straight line between mental illness and homicide in their policy prescriptions, but most mental-health professionals do not. ERPOs rely on a time-consuming multistep process to remove guns from an individual who may or may not have had a mental-health evaluation, rather than prohibiting individuals from obtaining destructive weapons in the first place. A 2021 RAND Corporation study noted that “a major limitation to researching mental health and violence is that only approximately half of those with a mental illness have a formal diagnosis.”

ON THE FLIP SIDE, domestic violence victim advocates and progressive Democrats have been “pleasantly surprised” by the GOP negotiators’ willingness to close the “boyfriend loophole,” a longtime goal that Republicans and the NRA have thwarted. About half of domestic violence homicides involve dating partners, and this can spill over into generalized gun violence. A 2021 Injury Epidemiology study found that nearly 60 percent of mass shootings involved domestic violence; in about 70 percent of those mass killings, the shooter killed “at least one partner or family member or had a history of [domestic violence].”

Current federal law bars convicted domestic violence abusers from purchasing firearms if they are a spouse’s live-in partner or parents, but not romantic or dating partners. The change would extend the ban to all domestic abusers. According to the Giffords Law Center to Prevent Gun Violence, a national gun control advocacy group, 28 states and D.C. have partially or completely closed the dating partner loophole.

Other proposals are more limited and would either magnify weaknesses in existing regulations or have raised objections from the people the measures are designed to protect. Enhanced background checks for 18-to-21-year-old gun buyers would require an investigative period (as yet undefined by the bipartisan group) to review state and local juvenile and mental-health records, including National Instant Criminal Background Check System cross-checks, which could take up to ten days. The age parameters already merit further scrutiny: The day after Uvalde, police in Richardson, Texas, arrested a teenager (who could not be named due to his age) with assault gun replicas. In early June, Berkeley, California, police took a 16-year-old youth into custody for allegedly trying to recruit others for a mass shooting at a local high school. A search of his home turned up assault weapons and explosives.

The agreement reflects the GOP’s keen interest not only in mental-health “solutions” but school hardening and deploying more police and security officers to schools. But those proposals are increasingly meeting with resistance from teacher and police unions as well as some parents. There is scant data available to support or dismiss the idea that hardening of schools will deter attacks. After Uvalde, Texas teachers remain uninterested in being armed.

This week, Ohio mandated 24 hours of training for school districts that decide to allow school staff to carry weapons. Yet Ohio teachers do not want to carry weapons either, and the Fraternal Order of Police of Ohio agrees. In some communities of color, residents, including parents who want more protective measures, express concerns that more people carrying guns in schools may lead to an increase in students being detained or arrested for minor infractions.

Two gun bills that would meet the Uvalde moment passed the House last week. The Protecting Our Kids Act would raise the age to 21 for select sales of semiautomatic weapons, establish new laws against gun trafficking and selling high-capacity magazines (while allowing local governments to compensate people who turn in magazines), and tighten up regulations on ghost guns and bump stocks. The Federal Extreme Risk Protection Order Act would establish national ERPO laws.

Currently, neither bill stands any chance in the Senate. Nor are bills banning assault weapons or universal background checks likely to be introduced in the short term, even though during the ten-year federal assault weapons ban from 1994 to 2004, mass-shooting deaths were less likely to occur.

ONE OF THE MAJOR DIFFICULTIES with the agreement is that it rests on negotiating textual language in plain view during a two-week window that ends June 24, the first unofficial deadline, when Congress shuts down for its two-week Fourth of July recess. Democrats want to get some semblance of a deal done before the break since the politics get trickier as Congress heads into deep summer and butts up against the monthlong August recess.

Sen. John Cornyn (R-TX), the key GOP negotiator, who has worked with Democratic senators Chris Coons of Delaware and Chris Murphy of Connecticut on past gun measures, is already on the defensive. His Texas colleague Ted Cruz has been busy stoking fears against what he claims is a “national red-flag law.”

Cornyn told CNN’s Manu Raju Wednesday that two issues could toss the negotiations into next week. First, regarding the scope of red-flag laws in states that have not adopted them but have other types of crisis intervention programs, anything tied specifically to those laws would be a nonstarter, he tweeted. The second obstacle involves the boyfriend loophole:

Nearly 3,000 people have died in gun-related killings since the Uvalde massacre on May 24, according to Everytown, a national gun control advocacy group. But despite the urgency, and with gun violence destined to spike as it does during hot summers, Republicans are again relying on recalcitrance as a negotiating tactic to undermine this thin slate of gun control measures.