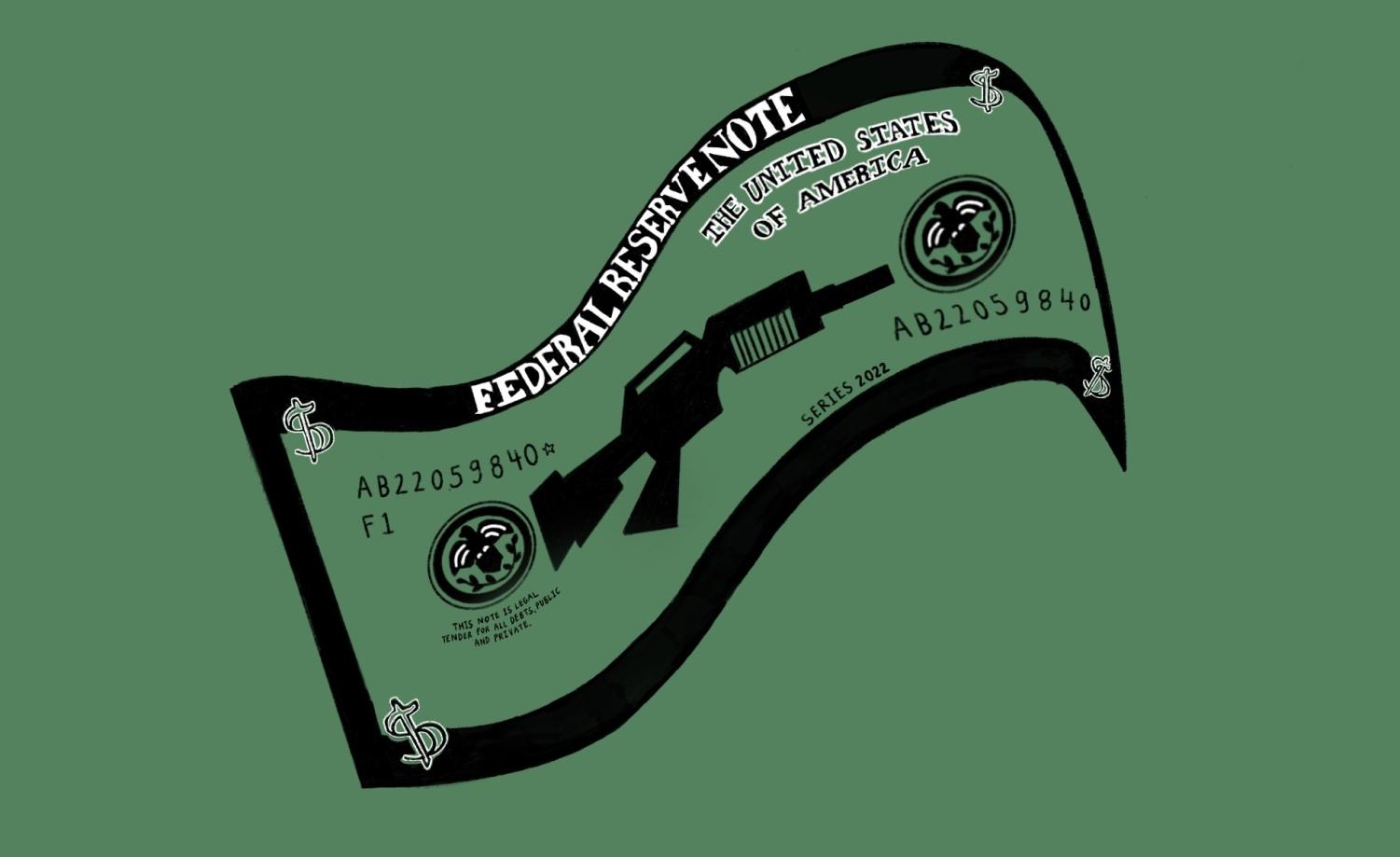 Every day, we see reports of more mass shootings. Politicians offer thoughts and prayers with no action to back them up. Democrats and Republicans point fingers at each other as if their negligence isn’t both bipartisan and profitable. Meanwhile, we’ve become fed up to the point of desensitization.

No solution will appear while politicians continue to talk in circles around each other. But as the Party for Socialism and Liberation says, debating over gun rights and control doesn’t do the issue justice. The problem of gun violence is one of white supremacy, class war and imperialism.

The History of U.S. Gun Laws

It makes sense that the U.S. has the most gun violence worldwide, considering it is the epicenter of capitalism — a system that profits off of violence. Our military is the most funded military in the world, largely for the purposes of stealing resources from other countries. Our police budget ranks third largest and surpasses the military funding of all countries other than China. Protests against exploitation and police brutality often incentivize increased police department funding to squash those movements. When the system functions to exploit people in every violent way imaginable, the end result will always be the same.

The profitability of violence permeates every chapter of our country’s history. The Constitution created the precedent for gun rights. But the right to bear arms carries a deeply one-sided and racist history. The U.S. created the Second Amendment to enable white settler colonialists to murder Indigenous people and steal their land. White militias later used it to form slave patrols. Throughout our country’s history, the government has prohibited Black people from carrying guns through slave codes, Black codes, gun bans and gun control laws in response to the Black Panthers.

Little has changed since then. Black people that legally own guns to defend themselves in a country designed to hurt them face deadly consequences. For instance, Amir Locke and Philando Castille. They are far from being the only victims of our racist system. Meanwhile, white supremacists and Nazis like Kyle Rittenhouse and Payton Gendron stockpile assault rifles. These perpetrators get gently escorted by police away from crime scenes.

Gun control is commonly presented as the solution to this violence. But gun control has never been about protecting people. Rather, it has always been about enacting violence on marginalized groups, particularly Black and Indigenous people. It takes away their necessary means of self-defense. White men own the majority of guns in the U.S. and make up the majority of mass shooters. However, background checks primarily target people of color and they are more likely to be unjustly incarcerated. Banning gun ownership would be dangerous for people of color targeted by a police state that’s armed to the teeth.

The majority of our representatives accept money from the gun lobby. Al Jazeera writer Joseph Stepansky defines the gun lobby as “efforts to influence both state and federal policy on guns.” The National Rifle Association — America’s most powerful gun lobby group — spends obscene amounts of money on manipulating legislation and media. The organization increases profits for the gun industry through laws that protect the industry rather than people. For instance, the only time they supported gun control was to target the Black Panthers. Their history of fearmongering and promoting white supremacist rhetoric is extensive.

Their money finds its way into the pockets of many politicians. Utah’s Sen. Mitt Romney has received $1.1 million from the gun lobby — the most money of any congressperson since 1989. Mike Lee, Burgess Owens, Chris Stewart, John Curtis and Blake Moore follow in his footsteps. Democrats aren’t any better. They prey on community grief and use gun control as a talking point in their campaigns. Meanwhile, they continue to profit from the gun lobby and disenfranchise the vulnerable communities they claim to represent.

The gun lobby will never allow politicians to limit their power as long as they can profit. Existing laws, such as The Protection of Lawful Commerce in Arms Act, serve the gun industry and protect them from responsibility. Lobbyist money influences these laws. Merrill Cook, a former Utah congressman, said so himself.

Politicians will never do anything helpful as long as they continue to profit from the gun lobby. Laws wouldn’t be enough, anyway. Gun violence is so deeply intertwined with American history and culture, that the issue must be approached from many different angles.

The Party for Socialism and Liberation outlines some of these angles. They explain the need to tackle the culture that promotes gun violence in the first place. This method tackles societal factors such as “exploitation, alienation, oppression, poverty and competition.” It starts with community care. In Salt Lake City, there are many local groups people can join. This includes PSL, Decarcerate Utah, Salt Lake Community Fridges, Wasatch Tenants, Open Air Shelter, The Sex Workers Outreach Project and more.

PSL also emphasizes that we shouldn’t support policies that would target and take autonomy away from BIPOC. Instead, we should demand the demilitarization of police and state, in addition to the end of protections for and promotion of the weapons industry.

This country does not allow time to grieve, but we can find support systems within our communities. We don’t need the shallow prayers and false condolences of politicians. We do, however, need each other, and we cannot allow mass desensitization to happen.