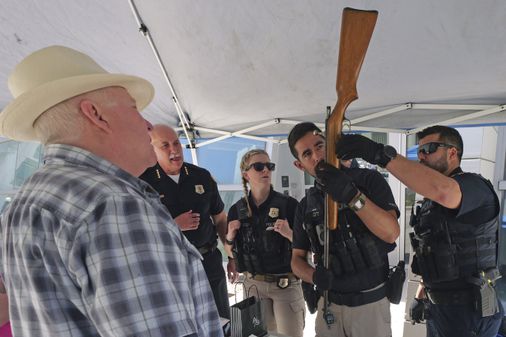 “It’s, I guess I’d say, my biggest defeat in my career,” said Cochran, 67, who has been in law enforcement since he was 20. “There’s a difference between being a responsible gun owner and just a crazy gun nut.”

Get Today in Politics

A digest of the top political stories from the Globe, sent to your inbox Monday-Friday.

Cochran is one of numerous law enforcement officials in conservative states who have in recent years spoken out against loosening gun laws, finding themselves ignored by the same Republican lawmakers who loudly declare their unwavering support for police. These officers have lost battle after battle at the state level, but proponents of gun safety are hopeful that the willingness among some law enforcement to speak up will help get a new federal gun package, which is being hashed out by lawmakers in Washington, over the finish line.

“As the laws get more extreme and the proposals get more extreme, we see more active participation by sheriffs, law enforcement, at the state level,” said Mike Meade, the director of local government affairs at Everytown for Gun Safety, an advocacy group pushing for gun safety laws. “There is a common voice from law enforcement organizations at this moment that more needs to be done, that there is a desire for Congress to do something.”

In states like Nebraska, Texas, and Indiana, some police groups have clashed with Republicans over the encroachment of so-called “constitutional carry” laws that allow people to carry weapons without licenses or training, a conflict that has injected a note of public discord into the long-established alliance between law enforcement and the GOP. In Missouri, a police chief quit over a law imposing steep fines on law enforcement who help enforce some federal gun laws. And just this week in Ohio, law enforcement groups reeled as Governor Mike DeWine, a Republican, signed a bill they vociferously opposed that will allow teachers to carry guns in school with no more than 24 hours of training — a sharp reduction from the 700 hours the state previously required.

“We’re putting more guns into schools, into the hands of potentially untrained teachers,” said Gary Wolske, the president of the Ohio Fraternal Order of Police, a union there. “Maybe you should listen to the experts once in a while.”

Both sides of the gun debate have long sought to show they have police on their side, and experts say rank-and-file police officers tend to be more conservative than their leaders or chiefs on the issue. But there are many aspects of officers’ jobs that would seem to make them natural advocates for gun safety, since they patrol the streets of a nation with 400 million guns and are on the front lines of the gun violence that makes daily headlines. In Uvalde, Tex., police have faced fierce criticism for not quickly confronting the shooter, armed with an AR-style rifle and 30-round magazines, who killed 19 elementary school students there.

“When you think about the gun issue there’s so many aspects to it that affect policing,” Chuck Wexler, the executive director of the Police Executive Research Forum, a Washington-based group that researches best practices for police, said. “Police chiefs know the extent and nature of gun violence in their community. They need to speak up about that.”

But the connection between police and pro-gun rights groups like the National Rifle Association has a long history. In the early 20th century, the NRA was one of the earliest proponents of police forces being armed, said Jennifer Carlson, a sociologist at the University of Arizona who has researched police attitudes toward guns and the Second Amendment. Today, it still offers law enforcement training to become firearm instructors. It also provides line-of-duty grants of $35,000 to NRA members who are killed while serving in public law enforcement.

“It speaks to police as this highly prized ally in the gun debate,” Carlson said.

Police groups got behind gun control in the 1990s, when officers lined up behind President Bill Clinton as he signed the assault weapons ban into law. But it was a measure that came as part of a bigger package of harsh criminal penalties, including one that ballooned incarceration rates and disproportionately affected communities of color.

Law enforcement support for that law was “embedded in the racial politics of the war on crime,” Carlson said, “essentially wanting to stack the deck in their favor of not being outgunned.”

Overall, she said, most police officers have long favored gun rights over gun control. “They tend toward owning guns and identifying as conservative,” Carlson said, referring to surveys and her own research.

The bond between rank-and-file police and the Republican Party has strengthened in recent years, particularly as Democrats have called for police reform that some police groups oppose and even, in a few cases, advocated “defunding” departments altogether, in the wake of police killings of unarmed Black people and other minorities. Republicans, meanwhile, have branded themselves the pro-law enforcement party, even as both parties continue to generously fund the police.

“There’s been a general trend from law enforcement to move in a more conservative direction and that’s not unique to us,” Jim Pasco, the executive director of the Fraternal Order of Police, a large national police union representing rank-and-file officers, said. “This constant drumbeat of criticism and second guessing of law enforcement when they perform their duties — when somebody comes along and says, ‘Hey I got you 100 percent, hey I got you 1000 percent, I’ve got your back,’ ...it’s been a compelling attraction.”

That made it all the more surprising to some observers of gun politics when, late last month and again earlier this week, the FOP joined the International Association of Chiefs of Police, an organization that represents police leadership, in calling for action to address gun violence and then backing the initial compromise bill that has emerged in Washington.

“I’ve never seen them out on this issue,” said John Donohue, a law professor at Stanford who has researched gun laws. “The FOP is an organization which consistently has stood up for the rank and file. The fact that they’re taking these steps, it will at least make some of them reflect.”

Pasco, whom President Biden describes as a good friend, disputes that the move represents anything new for his organization, despite the notice it has drawn.

“Police still want the same thing. Not only do they not want the citizens to get shot, they don’t want to get shot either, by criminals with firearms,” he said.

Other police groups, including the Major Cities Chiefs Association and the National Organization of Black Law Enforcement Executives, are also calling for federal action. The proposal in Congress would expand the background check system and encourage states to adopt “red flag” laws to allow authorities to temporarily block people deemed dangerous from accessing weapons. Carlson said the measure is an illustration of the kind of gun safety measures rank and file officers are willing to support: One that gives them more options to prevent crime.

“You could kind of describe the deal as a toolbox for law enforcement,” she said.

Around the country, police officers who oppose certain gun laws are quick to say they support the Second Amendment, but their advocacy suggests there is some willingness — at least among chiefs and sheriffs — to break with the NRA and Republicans.

In Texas, leaders of police groups like Kevin Lawrence, who is the executive director of the Texas Municipal Police Association, are expecting to testify in front of the special committees of state lawmakers that Governor Greg Abbott, a Republican, has convened in response to the slaying of 19 children and 2 adults in Uvalde. Lawrence supports the idea of a red flag law for Texas, and also says he wants to “be at the table and have that conversation” about the idea of raising the age to purchase long guns to 21, from 18. (The Uvalde gunman was 18.)

“We feel like we’re pulling our hair out, trying to get folks on both sides, you know, to come together,” he said.

Lawrence was part of a failed effort by numerous police groups last year to stop his Republican-led state government from passing its own permitless carry law. Law enforcement groups complained that it could make the state more dangerous, by allowing people to carry guns without any training, and that it took away their ability to question people carrying guns.

“We never are opposed to the constitutional right of anyone to carry a weapon. … We just also believe that it was not unreasonable to request that somebody that wants to carry a firearm goes through a basic training course,” said Chief Jimmy Perdue of the Richland Hills, Texas, Police, the president of the Texas Police Chiefs Association.

In Missouri, another permissive gun law pushed by Republican lawmakers made then-Chief Philip Dupuis of O’Fallon, Mo., so concerned that he quit his job. He worried the law in question exposed police officers to lawsuits if they helped to enforce some federal gun laws — essentially removing their qualified immunity to avoid legal repercussions, which Republicans generally consider sacrosanct.

“Local law enforcement has a role and a place in teaming up with federal agencies for drug enforcement, for immigration enforcement, and for gun laws,” he said. “It just opened liability for me and my family and we just weren’t willing to risk it.”

Some police chiefs are frustrated that a party that professes to support them has not done more when it comes to gun safety laws.

“Many people support the police, but it’s empty if the lives of the community and law enforcement don’t rise to the level which they’re considering,” said Lincoln, Neb., Police Chief Teresa Ewins, whose testified against a permitless carry bill in her state that was defeated.

Sheriff Cochran, of Mobile, Ala., has run four times as a Republican but now feels like he is on the outs with his party following the passage of permitless carry. In January, he decided not to run for reelection, citing his age and the length of his tenure.

He believes the compromise in Washington is progress, albeit incremental, and hopes it’s enough to incentivize his home state to pass its own red flag law.

“The gun people are beginning to have to pay that price,” he said.