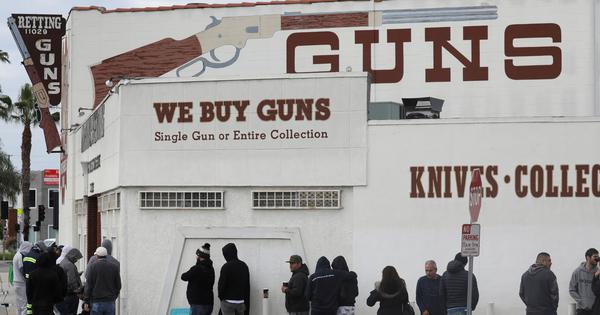 “To allow the market mechanism to be sole director of the fate of human beings and their natural environment… would result in the demolition of society,” warned political economist Karl Polanyi in his book The Great Transformation, published in 1944.

Had Polanyi been alive today, his statement would have found prophetic validation in the condition of society in the United States, one of the world’s most dominant economies.

For most of the late 20th century, the economy of the United States was built around an industrialised, mass-scaling model of weaponising itself and other nations while designing tools of finance to profit from war. That same economy is now in a situation where its gun industry, guided by the compulsions of less- regulated market forces, is wrecking its own society.

On May 24, a mass shooting at a school in Uvalde in Texas, killed 19 students, two teachers and left 17 others wounded. The killings, carried out by 18-year-old Salvador Ramos, are just one instance in the rapid proliferation of mass shootings across the United States.

In terms of gun ownership and violence, other nations have long been wary of the US situation. During the initial months of the Covid-19 lockdown, US gun lobbyists wanted gun stores to be counted among essential businesses, like food shops and pharmacies. A number of states readily complied with this, as did the US Department of Homeland Security.

The rise in the sale of guns during the pandemic made some observers nervous about America’s growing obsession with sophisticated weaponry and the US gun industry’s role in promoting such behavior.

But, what has shaped this?

A mix of two factors: the first is the second amendment of the US Constitution, which says: “A well regulated militia, being necessary to the security of a free State, the right of the people to keep and bear Arms, shall not be infringed.”

But as writer Ian Buruma has noted, American conservatives and gun lovers invoke this statute alongside history and tradition to “defend their right to carry anything from a Glock G-19 pistol to the popular AR-15 assault rifle”.

The second factor is the country’s undistilled faith in free markets, promoting the production and sales of the gun industry with few regulations.

As a result of the unfettered market-oriented thrust for the production and sale of guns across the United States with little regulation, combined with years of lobbying by the National Rifle Association, the United States is a situation where there are no safe spaces left for anyone.

In addition to Hollywood’s role in perpetuating a cinematic imagination of violence, scholars like Jeffrey Sachs argue that mass violence has a long, historical connection with American culture.

“America’s European settlers committed a two-century-long genocide against the native inhabitants, and established a slave economy so deeply entrenched that only a devastating civil war ended it,” writes Sachs.

“In almost all other countries, even Czarist Russia, slavery and serfdom were ended by decree or legislation, without a four-year bloodletting. When it was over, America established and enforced a century-long system of apartheid.”

Numerous mass shootings occur every year in a country that is also waging several seemingly endless wars overseas, says Sachs. The US, he argues, is a country with a history and current stark reality of racism, ethnic chauvinism, which continuously resorts to mass violence.

To each (state) its own?

Despite the deep ideological divisions in the country over gun control between Republican and Democrat-controlled states, there is a glimmer of hope.

Under the American Constitution, states can ban assault weapons and regulate firearms, though not ban handguns and rifles outright, given the US Supreme Court’s interpretation of the Second Amendment. On June 3, the state of New York passed a legislation prohibiting anyone under the age of 21 from purchasing or possessing a semi-automatic rifle.

Rather than fighting another ill-fated battle in Washington DC, it is more promising to encourage states to exercise their prerogatives.

As of June 9, the House of Representatives had passed a gun control bill. On June 16, both parties were supposed to have struck a deal, with US media reports quoting Senate Minority Leader Mitch McConnell expressing his support for this bipartisan package.

A bill requires 60 votes to clear the 100-member US Senate, which is currently composed of 50 Republicans and 50 Democrats. NPR reports that 10 Republicans are in favour of the bill in its current form.

Ruling in the 2008 case of the District of Columbia vs Heller, Justice Antonin Scalia of the American Supreme Court wrote that the second amendment of the US Constitution meant that Americans had the right to own firearms.

But, as Scalia also noted: “We also recognise another important limitation on the right to keep and carry arms. We think that limitation is fairly supported by the historical tradition of prohibiting the carrying of ‘dangerous and unusual weapons…”’

Given Scalia’s arguments on gun control, and the efforts by progressive states such New York, there is precedent for more American states to tighten existing gun laws and pass new ones on issues around ownership of “dangerous and unusual weapons”. At the same time, they must also regulate the market to stymie the growth of the gun industry.

There are also useful lessons here for the neoclassical American economic thought that has guided its social and economic landscape for much of the late 19th, 20th and now 21st centuries.

The market in the United States, including that for guns, is based more on maximising self-interest and less on the consequences, ethics or morals of resulting actions. This is increasingly dominant in market-oriented nations across the globe. This, of course, needs to change.

If only the value of human life is considered, as also discussed by economist and philosopher John Broome in his essay titled “Why Economics Needs an Ethical Theory”, the question of what “sacrifices it is worthwhile for us to make in order to save some people’s lives” in economics is usually answered by applying the principle of willingness to pay.

According to this principle, “the value of life should be determined by people’s willingness to pay to avoid exposing their lives to danger”. This is a simple logic best used in quantifying insurance cost or in doing a cost-benefit analysis covering for any risk.

One implication of applying the willingness-to-pay principle is that the lives of those living below a certain income threshold will be valued lower than those who can pay more for “primary goods”.

Philosopher John Rawls, in his book A Theory of Justice, defines primary goods as those desirable by and useful for all human beings. He classified them into natural goods, such as education health, education imagination and others, and social primary foods such as rights, liberties, income and wealth among others.

This can make economics, in its own fundamental construct, a discipline without ethical considerations. This is a concern which prompted several economists to make ethical issues more explicit in other areas of welfare economics or development economics.

Any discussion or economic policy framework – whether on guns or any commodity that may inflict harm on another human being – that seeks to minimalise the effects of socio-economic problems thus, warrants accommodating larger ethical considerations.

This will push individuals to become more reasonable and morally sensitive in making decisions within a larger social set-up as against being driven by a self-serving maxim – or one justifying self-protection – that mainstream pro-gun market advocates categorise in their conceptualisation of American well-being or the American way of life.

Deepanshu Mohan is an Associate Professor of Economics and Director at the Centre for New Economics Studies, Jindal School of Liberal Arts and Humanities, OP Jindal Global University.